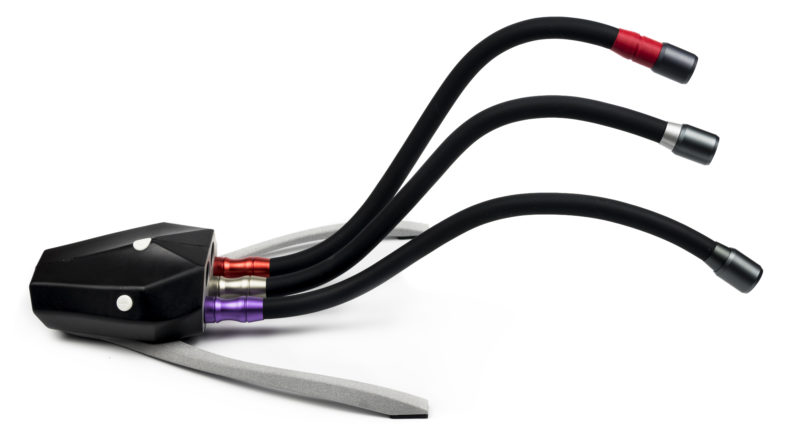 Two years ago, a British company successfully crowd-funded the Adaptalux Studio, a lighting system for macro photography. The Studio comprises a battery-powered control pod and up to six flexible LED lighting arms, available in various colours.

Now Adaptalux has returned to Kickstarter with the EFX Lighting Arms, a series of three new modules that add even more versatility to the system. The new arms include an ultra-bright LED with a narrower beam, an ultraviolet (UV) light and a laser arm.

UV light, when shined on an object, stimulates the emission of visible light, which can show off hidden structures in leaves, insects and other natural objects.

The S (“super bright”) lighting arm uses the same LED as the original Adaptalux arms, but with a lens that focusses the beam, effectively making it brighter, while covering a narrower area. This can help you use lower Iso-sensitivities and higher shutter speeds.

Finally, the laser lighting arm projects a red laser beam, which can be used for all kinds of creative effects and transmitted through semi-transparent objects.

Here are some example images using each of the EFX components.

Adaptalux hopes to raise Â£2,500 ($3,400) by the end of the campaign. Backers can pledge more than Â£37 for the laser or S arm and Â£52 for the UV arm. If you don’t already have an Adaptalux Studio control pod, you can get one and two arms by pledging Â£180; the original system is also available from the Adaptalux Shop.