The makers of Adaptalux, the modular mini macro lighting studio, have added smartphone remote control to the LED system’s feature set. If the product’s crowd-funding campaign is successful, the Adaptalux “Control Pod” will support USB Bluetooth and WiFi dongles, allowing you to adjust the close-up lights from a computer or mobile handset.

“This is an exciting update, which opens up lots of possibilities for the future of Adaptalux,” the manufacturers said. “For example, we have ideas for RGB panel attachments that will give you the ability to mix your own lighting colours on your phone. We also have an idea to integrate a â€˜Live lighting showâ€™ feature to the app for videography work.” 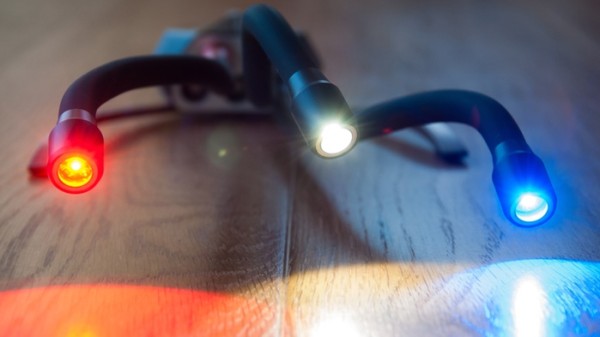 An RGB LED module and wireless remote control would allow Adaptalux users to harness creative capabilities like those offered by the popular Rift Labs Kick light. The firm also plans a “Lighting Environment Database” (LED), which will let users share lighting configurations and pictures of setups with other photographers around the world:

“The app can be used to take pictures of lighting set-ups created with Adaptalux, which translates the set-up into a easily readable configuration for other people to follow. This set-up can then be uploaded privately or publicly onto the L.E.D, for yourself and others to use. All electronic lighting configurations can be uploaded and downloaded to and from the Control Pod via bluetooth or wifi directly from the app or webspace. It also allows for live control, so you can adjust the electronic aspects of your lighting environment through your phone or computer.”

At the time of writing the project has raised around 60% of its crowd-funding total of Â£100,000 and has just over two weeks to make up the rest. A new “stretch goal” of Â£110,000 will have Adaptalux make a dedicated wireless dongle as a modular accessory available from launch. Click here to visit the Kickstarter campaign page.