At this time of year many of us are putting our feet up to watch a few classic family films. But when we return to the studio, there’s no need to leave that festive spirit at the door, thanks to Shenzhen-based manufacturer DSLR Kit.

Not to be confused with the waste-collecting robot WALLÂ·E (because Disney have obviously not endorsed this one), Walli is “designed for professional video taking”, and bright enough to emulate a traditional 200W lamp, or so say the manufacturer. The device is powered by Sony F750 or F960 lithium batteries with a runtime up to around two hours.

Walli has a coldshoe foot and a 1/4″ screw thread for mounting on your video camera, bracket or light stand. Each of the two LEDs can be switched on and off independently, and there are also seven different dimmer settings. According to the manufacturer, the light has a colour rendering index (CRI) of 92. 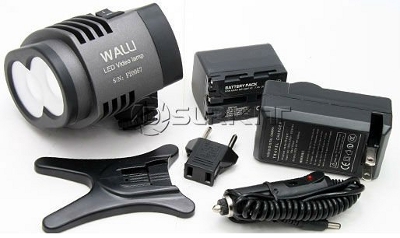 Unlike the Disney character, Walli doesn’t come from the scrapheap, instead claiming advanced LED technology, constant current control and a new kind of heat dissipation.Â A video demonstration of the light can be seen here. Walli is also known as the ZF-2000.

The Walli LED Video Light is available for US$99.99 (Â£66.80) from online dealersÂ including a one year warranty.