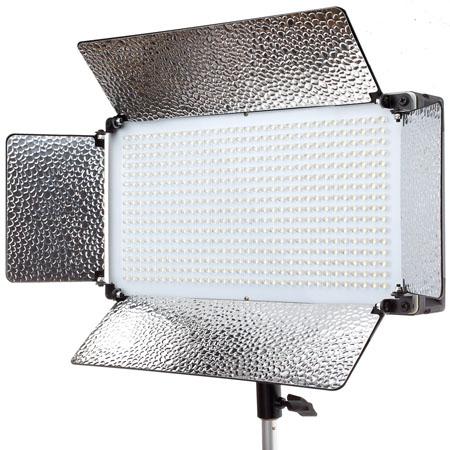 Adorama, the photographic superstore in New York, recently sent us one of their Flashpoint LED lights to evaluate. The retailer’s in-house Flashpoint photo gear brand has been going for a while now but it is only recently that they have ventured into studio-sized, mains-powered LEDs. At the time of writing, the Flashpoint 500 and 500C are the largest panels on offer and â€” priced at $160 for the normal version and $200 for the bi-colour one â€” seem like they could be an attractive option for studio owners.

We have been playing with the Flashpoint 500C, described as “a flexible tool for your video and still photography needs”. As the name suggests, it has 500 individual diodes in a rectangular array. The “C” designation means that this one is bi-colour â€” that is, the colour temperature can be adjusted on the fly. This first review looks at using the panel for stills photography and in a later article we’ll be testing it out as a video light.

Can something like the 500C replace your trusty studio flashes? Or, if you are just getting into lighting now, would you be better off to get into using LED lights rather than starting with flash?

First and foremost, this isn’t a small unit. If you’re relying on something to mount on top of your camera vis-Ã -vis a speedlight then you might want to look elsewhere. MeasuringÂ 35cm by 19cm by 7cm and tipping the scales at 2kg, this is hardly a deviceÂ comparable to an iPadÂ and won’t simply slip into your camera bag.

Design-wise, the Flashpoint 500C is both simple and clever. The instructions run to just one side of A4 and largely consist of “put it together, plug it in, don’t electrocute yourself” so this unit definitely gets points for ease-of-use. That is not to say that the design of the unit hasn’t been carefully thought out. The fuse, power socket and dimmer dials are all found on the back panel in sensible places. There is a carrying handle which makes shifting (or tilting) the whole thing comfortable and effortless. The built-in barndoors will protect the LEDs when folded inwards.

There is also a mount for standard V Lock batteries, allowing you to free yourself from the mains power. These batteries cost as much as the light itself so I’d have a look for a longer power cord before shelling out the extra dosh for one. We haven’t got a Flashpoint V Lock battery on hand so we can’t testify how much runtime you’ll get from one. 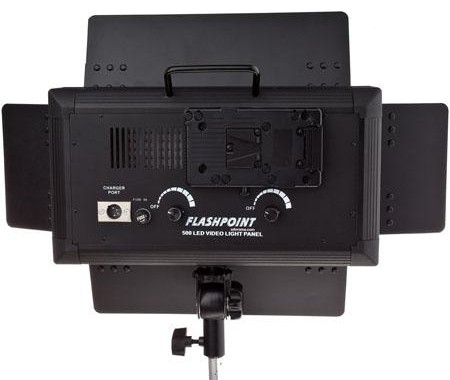 All four sides of the panel have a groove into which you can fit the stand adapter, allowing you to mount the light in either a horizontal or vertical orientation. This is a handy feature: the LED equivalent of being able to spin a softbox on its speedring. So you can shape the light to match your subject, for example vertically to illuminate a standing portrait subject or horizontally to fill a video scene.Â Taking the adapter off the 500C makes packing it away neatly very painless compared to, say, all of my studio monolights which have awkwardlyÂ protruding non-removableÂ brackets. Though you can’t remove the Flashpoint’s carrying handle so it’s swings and roundabouts.

Setting up the light presents a minimum of fuss. This product was shipped to me from America so it came with a US-style kettle plug. All I had to do was swap that out for a proper one and I was ready to go, thanks to the 500C’s worldwide voltage support. There is no on/off switch on the panel; instead you turn the dials and photons start shooting out the front.

The control system is a little bit counter-intuitive at first; rather than having one dial for brightness control and another for colour temperature, each knob independently controls the intensity of one type of LEDs, arranged in alternating rows in the matrix. One of them adjusts the “white” diodes and the other adjusts the “orange” ones. But without playing around with them first, you’ll never know which is which as they aren’t labelled. 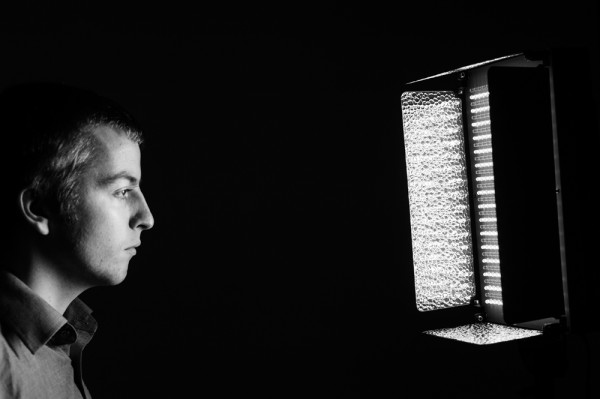 Furthermore, there is no way of telling with any precision what brightness level is set, or what colour temperature is currently being emitted. It doesn’t help that my instruction sheet says the colour range is 5300â€“5900K while Adorama’s listing suggests 5200â€“5800K. In the middle of a shoot the only way to find this out accurately would be to use a colour meter, but since such devices cost over $1000 it sort of defeats the point of economising on such a budget-priced light source in the first place.Â From my own quick testing in Adobe Lightroom, there’s a shift of 1200 Kelvin, not the 600K specified, so I’d probably disregard the manufacturer’s figures.

In practice, if I set my camera to tungsten (light bulb) white balance and turn the Flashpoint 500C on full orange, the result looks slightly warm with a tiny greenish tint. Conversely, if you turn the LEDs on to their “bluest” setting and set the camera to daylight (sun) white balance then the final image has too much of a warm tinge. Acquaint yourself with the pre-set white balance feature on your camera since you’ll be using it a lot. Rather than calling this a “bi-colour” light I’d say that it is one offering a variety of shades of orange. This isn’t as useless as it might sound â€” you can set up the 500C as your main light and then choose whether you want the ambient sky light to appear faintly blue or vividly so:

In terms of raw power, with a Sekonic L-358 incident light meter from one metre away (barndoors perpendicular to array) I measured a reading of f/3.2, Iso-200, 1/125 second at the Flashpoint 500C’s maximum output setting. At two metres I read f/1.6. Now your mileage will vary depending on other ambient light sources, nearby reflective surfaces, the positions of the barndoors (which are reflective on the inside) and which way you are pointing the light, but with modern cameras you should be able to achieve a reasonable choice of settings. Most sensors will give clean results at Iso-800, which at one meter will offer you f/6.3 at a very hand-holdable 1/125 second with this kit.

For portraiture, what more do you need? Use a tripod and you can slow your shutter speeds down a bit more with well-behaved subjects (and still-life subjects are the epitome of good behaviour). If you’re serious about clean files and think Iso-800’s a bit risky then you can invest in another LED panel to double your light (or with any luck Adorama will bring out a 1000-LED panel).

The barndoors give a phenomenal level of control. I was surprised at how easy it is to completely black out the background, even when said background is a white wall in a tiny room. This is a definite plus for enthusiasts thinking of adding this to their home studio kit â€” less need for big studio spaces or to spend money on backdrops. Since we’re dealing with continuous lighting you can see exactly where the light falls before any snaps are taken, making the whole experience very streamlined. Used up close, the light isn’t too harsh thanks to the large size of the light source itself. You won’t get the same results from a bare speedlight without adding bits and bobs to the front of the flash head.

One of the biggest disadvantages of using an LED panel versus a studio flash head is that you can’t fit commonly-available lighting accessories to the front. For close-up work this is somewhat mitigated by the size of the diode matrix itself but won’t really do you any favours if you’re aiming for full-length shots or super-soft portraiture. The answer to this is to use off-light modifiers: that is, bounce the light off a wall or aim it through a sheet of fabric. The corresponding loss in light intensity will drive your camera to its limits, however, unless you use multiple panels at once. I only had one 500C to try out, but if you’re interested in seeing setups of this kind then Kirk Tuck does a lot of good work with low-price LED panels, which you can read about on his blog.

Here’s a self-portrait using a DX lens on an FX camera, because that’s how I roll:

Where I really enjoy using the 500C is for product shots, such as the image below from our MeYin RF-604 review. Using flash for such tasks is a real pain because it’s hard to balance the light with other less powerful sources, such as LED indicators or backlit LCD screens, which sometimes I need to highlight in the photograph. Continuous lighting, like that from the 500C, makes the process so much easier that it’s probably lengthened my life expectancy by all the reduced stress.

Yes, the panel’s colour temperature has a life of its own but that doesn’t matter in a one-light setup when one can shoot in Raw format and pick the white balance in post-processing. The movable Flashpoint light stand adapter allows me to suspend the length of the LED array over a subject almost like a boomed softbox, while the barndoors keep spill light away from the background for an edgy low-key look. 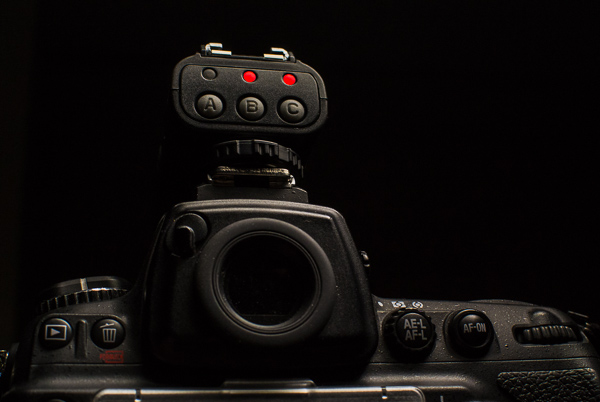 Since Aputure announced that their new, competing LED light the Amaran AL-528 comes with a custom case, I rather wish that Adorama offered the same. As it stands, the Flashpoint doesn’t come with anything apart from the power cable and the cardboard box it ships in. There are a number of bags and cases available from the store but none of them is really dedicated to the 500C so you might have to take out your tape-measure and shift a few dividers around to make it fit â€” unwanted faff. I found that an old laptop case fits the 500C exactly, and since it’s from Ikea it is the height of fashion and I can now be the envy of my peers.

My experience with it has been a bit of a mixed bag. I quite like the high level of control offered by the hardware, even if the actual light output doesn’t have quite the same precision to it. Using the 500C as a single light for portraits and product shots is a lot of fun and a really fluid process. If you bought a couple of these then they should at least match each other even if they don’t align with any of the default white balance settings on your camera. I can see this product being a good candidate in a home studio setup for someone getting into lighting. It could also be used professionally so long as the photographer is well aware of its limitations and how to work around them. While it’s not necessarily a replacement for the high-end studio flashes of a demanding commercial shooter, it could complement them nicely.

Should you buy one? Maybe, but there are other options out there to consider first. The AL-528C, the bi-colour version of the Aputure Amaran AL-528, could make for an interesting comparison â€” we’ll be aiming to get one in soon to review. There are also a number of monolight-shaped LED lights that offer more flexibility by letting you mount lots of different light-modifying accessories, so give those a look too.

The Flashpoint 500C is available now for $199.95 from Adorama, who are based in New York City and ship worldwide.