Why Sony didnâ€™t provide a real hot shoe on most of the NEX cameras may forever remain a mystery. Some attempts to create hot shoes and wireless flash triggers have been downright failures (one such unit completely fried my NEX 5n and the manufacturer of the device ended up replacing my camera). With that little piece of history, it was with more than a little hesitation that I decided to try out the Allacax Next II system. 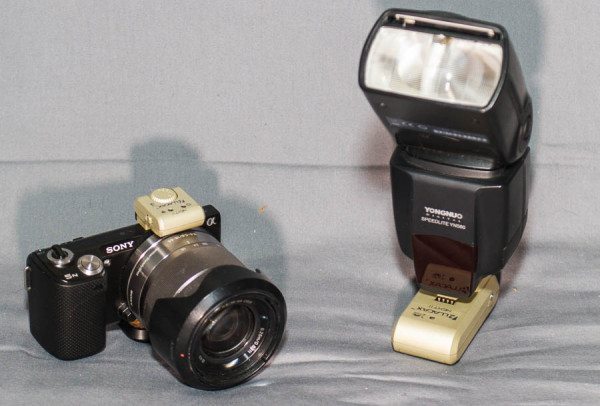 Starting off with the basics, the Allacax Next II is your basic wireless trigger system designed for manual control of the camera and flash unit. The system comes with the transmitter, which is powered by the camera, and a single receiver powered by two AAA batteries.

The specs certainly look good enough but the question is: â€œDoes it live up to its specs?â€ First impressions were pretty good, the system just worked as described. The flash unit used was a Yongnuo YN-560 and it fired every time. After letting the camera sit for a few minutes while arranging a scene, the system did not work again. Power cycling the NEX 5n fixed the problem and we were able to continue shooting.

The specs state a distance of 300â€™ but I ran out of space at 180â€™ and it was still working just fine. They also claim a max sync speed of 1/320 second but on the NEX 5n the camera would not let me dial in anything past 1/160 second. Iâ€™m not surprised as this is what I have got locked down to with other systems.

Along with the Next II, I also got a chance to use the Allacax Smor hotshoe adapter. Again using the NEX 5n and a Yongnuo YN-560, I initially got the max of 1/160 second. On the side of the adapter is a small â€œNO LIGHT UPâ€ switch. Flipping this switch removed any shutter speed restriction. However, I was only able to shoot at 1/250 second or slower. At faster shutter speeds banding appeared on the top of the image.

Allacax Next II system performed quite nicely and I have been using it for a few weeks just to make sure my first good impressions would hold up with additional use.

You arenâ€™t likely to find the Allacax products anywhere outside of Amazon or eBay, where I found the Next II system selling for $44.99 and the Smor hotshoe for $16.79.

Based in California, Kerry Garrison is a professional wedding photographer and creator of the Camera Dojo photography site. View more of his work at kerrygarrison.com