A whole niche of the market is dedicated to getting that ring-light look. Ring lights, which surround the camera lens and therefore offer the most neutral light position physically possible, are used in a range of applications. The most subtle use of a ring light is as a fill rather than main light, to fill in shadows without adding extra ones. But as a main light, ring flashes create interesting doughnut-shaped reflections (or catchlights) in the eyes of portrait subjects, and halo-like shadows when people are against a wall.

So for some photographers, a ring light is something that might be useful. But the most affordable ring flashes and LED ring lights are tiny and only really suitable for macro photography (for example of flowers and insects), whereas the sought-after “ring-light look” is commonly achieved by professional photographers with high-end ring flashes attached to studio generators. For amateurs, semi-professional photographers and mere mortals just wanting to experiment, the pricing of state-of-the-art ring lights puts them out of reach. Even some modern mid-range-ish options are not really accessible: the Elinchrom Quadra Eco Ringflash costs Â£375, not including the Â£1,100 ELB 400 pack you need to power it. The Godox Witstro AR400 is probably your best bet at Â£400, but this might still be a bit too much for only occasional ring-light users.

Ring flash adapters, such as the Rayflash, Orbis and Roundflash, promise to shape the ordinary shoe-mount flash into a ring. Some are better than others but the light is not always even and such adapters can be unwieldy. Plus, they won’t help you much if you want to shoot video.

The decreasing cost of LEDs and the increasing sensitivity of digital cameras has made continuous lighting a much more feasible option. In this review we look at one: the Andoer LA-650D, an LED ring light sent to us by Camfere.com, an online photography shop. 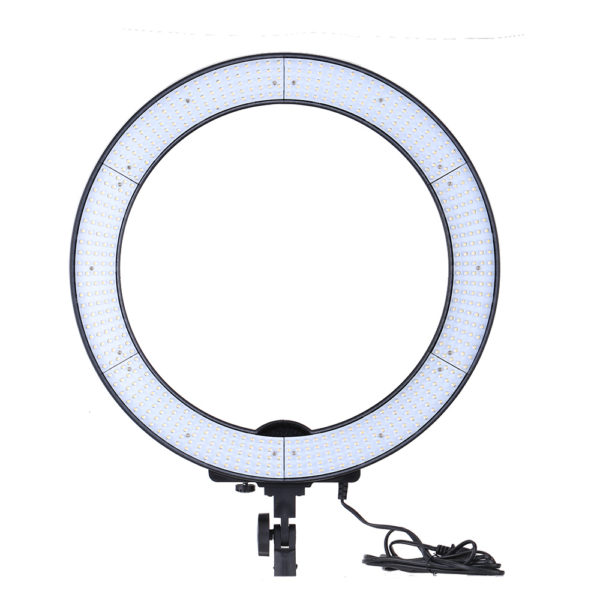 The Andoer LA-650D is a 40-watt, 600-LED continuous light that runs on mains power. It is ring-shaped, with an outer diameter of 48cm (19 inches) and puts out daylight-balanced light, which the manufacturer claims has a colour rendering index of over 90. If you were to buy one from Camfere, it would set you back $69.99 (Â£57), which is astoundingly cheap by ring light standards. But is it any good?

Our unit came in a dedicated semi-soft carrying bag, which contained all two of the LA-650D’s components: the ring light itself and a fabric diffuser sock to stretch over it. The power cable and light stand adapter are built into the base of the lamp, which although convenient and not too bulky, does raise questions about how to replace them if they wear out.

The carrying bag is good for keeping everything together and protecting the light from occasional knocks, but certainly isn’t bombproof. The LA-650D itself is extremely lightweight, being made mostly from plastic. It is quite bulky, but easy to carry. It doesn’t feel overly flimsy, but nor does it feel like a heavy-duty bit of professional kit to weather years of use, either. Who can complain at this price?

If I were looking for places where corners had been cut the most, it would probably be the tilt bracket. This is one of the cheapest you can find and would wear out very quickly, were it not for the fact that it isn’t actually supporting very much weight. A future version should have a removable bracket, so you can put in a heavier-duty bracket of your choice.

The diffusion panel is also pretty basic. It doesn’t fit very neatly over the light, though it does the job. It is quite thin, but helps spread out the otherwise harsh and dazzling light from the 600 bare diodes. A clip-on plastic one might look a bit more slick.

This is a very bright light. There is a dimming knob on the underside of the base, which lets you steplessly adjust the output from “off” to “bright” to “absolutey blinding”. If you were to use this for portraiture, the LA-650D cannot be criticised for lack of output. While doubtless not as bright than an equivalent ring flash, as a continuous light this is dazzling and makes subjects’ eyes water at the very brightest setting. Full output should be reserved for daytime use in very bright studios, otherwise you’ll surely blind someone.

If you were to use the usual rule of thumb for LEDs, then this 40-watt LED is roughly equivalent in light output to something like a 400-watt halogen lamp, and you wouldn’t want to stare at one of those for very long.

After mounting it on a stand, plugging it in (mine has a UK plug) and turning it on, there really isn’t much to it. Start taking pictures!

As far as I can tell there isn’t a way to mount your camera in the ring, as is an option for some other ring lights, though I probably wouldn’t want to put too much weight on the tilt bracket anyway. There is some sort of vestigal coldshoe mount on top of the base, but it’s not clear what this is for.

Instead, you can hand-hold your camera and just try to keep yourself aligned with the ring, or carefully set up a tripod to point the lens through the hole.

The very large diameter ring light effect has pros and cons. On the plus side, it seems to provide quite a big, soft light that works for portraiture without any accessories besides the included diffuser sock. (Though even with that sock, the shadows from individual LEDs are not completely indistinct, so you might want to double up the diffusion.) For portraits, subjects get those characteristic ring-shaped catchlights in their eyes, and shadows are omnidirectional. On the negative side—though hardly a criticism—you need a bit of space to use this light properly: if your subject is too close to the ring, the middle of their face will fall into shadow! 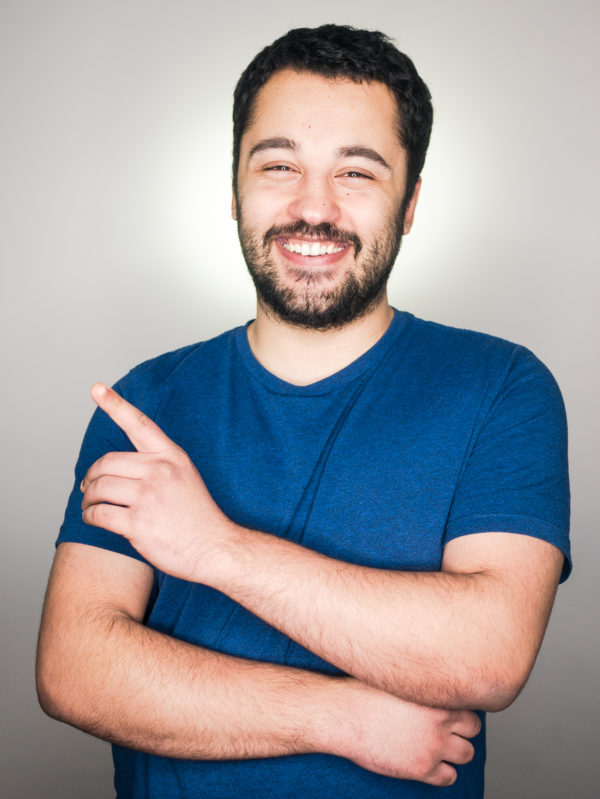 I have experimented with this light as a single, direct light in line with the camera and as an off-axis light acting like a softbox. I’ve also combined it with other lights, though I had to resort to my bicycle front light on a light stand, because I didn’t have any other photography LEDs to hand at the time of this review.

In all setups, the Andoer LA-650D did exactly what it is designed to do. There was no obvious tint that I could see and the output was constant, without flickering. (I haven’t tried using this for video, so can’t vouch for its performance at different frame rates.) Output adjustment is not very precise, but I wasn’t tweaking it much. Most of the examples here used fairly wide camera lens apertures: around f/1.8, 1/200 second at Iso-400; narrower apertures are possible but you’ll have to be careful about dazzling your subjects at the highest brightness settings. Freezing action might require a high Iso sensitivity.

To conclude, then, is this the ring light for you? If you want to experiment with ring lighting with minimal hassle and at very little expense, then absolutely pick one up. On the other hand, if you need something to survive the rigours of daily professional studio work, you might want to invest in something slightly more sturdy, more precise, with better accessory options and features like variable colour temperature. It’s also not very well suited to outdoor or location use, as there is no native battery option and you can’t replace the power cable for a longer or shorter one without cutting it. Otherwise, a nice tool for amateurs and semi-pros who have space for something a bit different in their studio.

The Andoer LA-650D LED ring light is available now for $69.99 (Â£57) from Camfere, who ship worldwide. Thanks to Camfere for providing us with this sample to review.

Update: Camfere has provided us with some discount codes, which are valid until 31 January 2017.

We don’t get anything in exchange for this, but they might save you some money if you are making a purchase.