Can you shoot with just LED bulbs?

But recently we have also seen some much cheaper LED options on the market. Andoer, a Chinese lighting brand, is offering Edison-screw 135W LED light bulbs for a tenth of the price of the aforementioned LED monolights. And according to Andoer, these bulbs still offer “high brightness”, “great colour rendering” and are “perfect for photo studio photography”. 135 watts is pretty powerful: if you follow the rule of thumb that LEDs are 7â€“10 times brighter than equivalent tungsten lamps, then these are effectively as bright as 1000W+ hot lights.

Addendum: The wattage of these bulbs is not a true 135W. Measured with a power meter, the wattage is 40W. See the comments below.

Does this mean you can build an LED lighting setup on the cheap? I decided to try and find out. Camfere, an online photography retailer, were kind enough to send me samples of two different Andoer-brand LED bulbs.

The first is rated 135W, has 132 diodes and is daylight-balanced with a 5500K colour temperature. It throws most of its light in one direction, though I would not quite call it a “spotlight” because it doesn’t have a reflector or fresnel to focus the beam. It has a circular light-emitting surface covered by a white plastic diffuser and with a large aluminium heatsink behind it. At the time of writing, it sells for $21.99 or about Â£18. 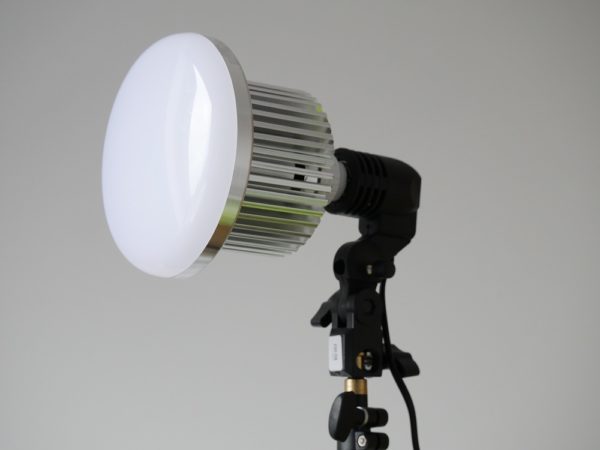 The second LED bulb is much more like a traditional bare light bulb, throwing light in every direction for a 360° spread. Also rated 135W, it has 216 diodes in a “corn lamp” configuration, so-called because the diode-covered cylinder looks like a cob of sweet corn. It is listed at $25.99 (Â£21).

In absence of clear model names, I will henceforth refer to these as the “mushroom” lamp and the “corn” lamp, after their respective form factors. 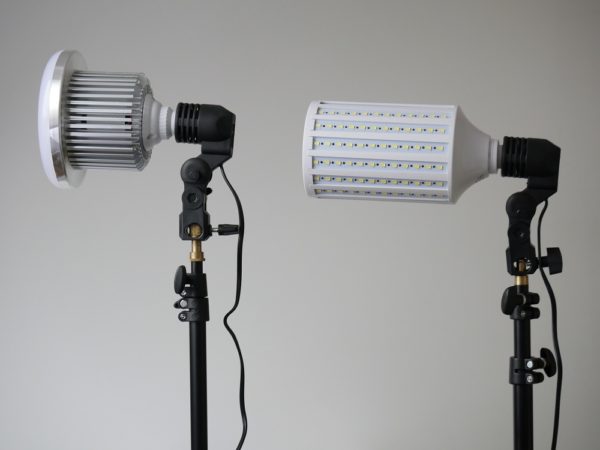 To get either of these things running, you need an E27 screw bulb holder. These are cheap and readily available: I bought a pair on eBay for Â£5 each. The brackets are plastic, have a light stand mount on the bottom, an integrated umbrella holder and a short cable to plug into the mains. More advanced ones have multiple sockets and even softbox mounts.

So then, that’s about Â£20 for each bulb and Â£5 for a holder and we have a tilting, swivelling LED lamp that can be mounted on a stand, puts out daylight-balanced light and is ostensibly as bright as ‘pro-level’ gear that costs ten times as much. What’s the catch?

Power output seems consistent, with no flickering that I could see. The colour temperature also seems to be exactly as advertised: set the white balance to daylight in your camera and no post-adjustment is necessary. As with most LEDs they have maybe a very slight green cast, but nothing that is not easily corrected. I do not have the capability to measure colour rendering index (CRI), but it looks like Andoer does not specify one anyway.

They are most certainly bright. It is hard to come up with an apples-to-apples comparison figure, as it depends what accessories you are using and the size of the room. I have been using these bulbs in workshops to demonstrate photographic lighting techniques. Through a pop-up white diffuser panel, the mushroom bulb gave exposures of f/1.8, Iso-1600 at 1/250 second at a range of about a metre. This might not sound like a lot, but with a diffuser panel much of the light is being spilled or reflected out of the frame; with a softbox or reflective umbrella it would be much more efficient.

The most readily apparent shortfall is the lack of power adjustment. The ubiquitous cheap bulb holders are primarily designed for use with fluorescent bulbs and can only be switched on and off. You might be able to put in a dimmer switch but I am not sure what kind I would need to reduce the output without flickering or other problems.

Setting that issue aside for the moment, the other disadvantage of these bulbs, which might not hit you until the day they arrive, is that they are huge! The bulbs are very lightweight, but being mostly heatsink to keep the LEDs cool, you are saving very little space over an all-in-one photography lamp. (The mushroom bulb in particular is almost too wide to be used with an umbrella, but it just about fits albeit slightly askew. With a different bulb holder this would not be an issue.) 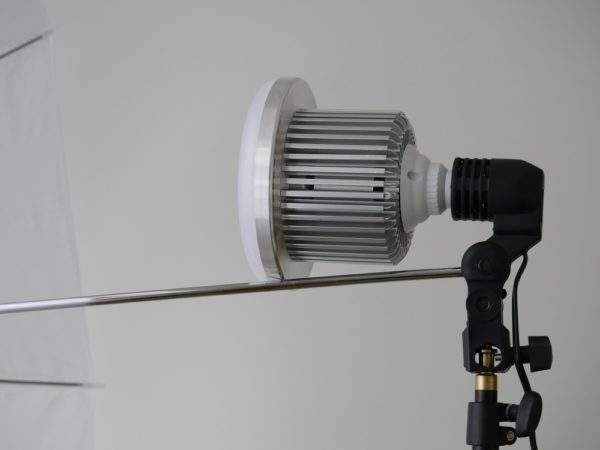 Fortunately, both these bulbs can take a beating. This was put to the test when Camfere inexplicably decided to start the testing early with a cruel and unusual punishment: shipping them all the way from China in thin cardboard boxes with no padding whatsoever. They were so ill-treated that the mushroom light was bent out of shape and I had to bend it back again to get the diffuser cap on. The corn lamp also has some battle scars. But it is testament to their build quality that both are in fully working order without a single dead LED. Camfere has said this will not happen in future shipments to customers. 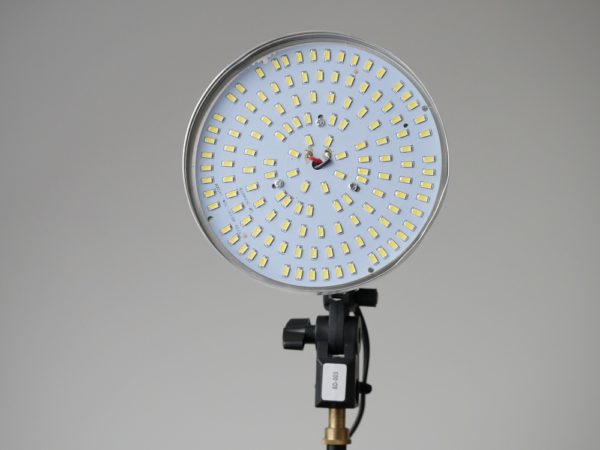 In use, the mushroom bulb gets much hotter than the corn lamp does, presumably because its diodes are more tightly packed into one place. The metal heatsink gets quite hot to the touch and I usually leave it to cool for five minutes before packing it away at the end of a shoot.

I also found less opportunity to use the corn lamp: in theory it should be more versatile as a “bare-bulb” style light, but without a softbox or brolly box to take advantage of this characteristic, it mostly meant lots of wasted photons. At some point in the future I may invest in a softbox to test it more extensively; this will probably mean buying a new bulb holder that accepts softbox rods. Monolight-style LEDs have the edge here, because their accessory mount is standardised (usually Bowens S-fit) so you don’t need to buy (and find space for) a new mount every time you want to change lighting modifier. There are also fewer choices of metal reflectors compared to a studio light. If I had to choose between the mushroom bulb and the corn bulb, I would go for the former, because it is easier to use with simple light modifiers like pop-up reflectors and umbrellas. 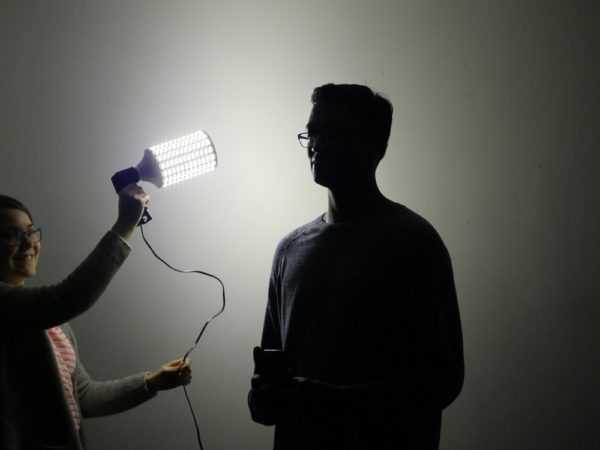 Here lies the main disadvantage of using cheap bulbs over a ‘proper’ LED monolight. You might have to commit to the cause to get the most out of it. This means getting several different bulb holders: perhaps one for umbrellas and another for softboxes, and then special softboxes to match them because speedring-style ones might not fit. If you do not have any existing flash or lighting gear going to waste, and you have the space, this might not matter. But if you also want to use flash, then it makes sense to go down the monolight route. If you shoot video, then get some extension cords because there is no native way to use these LEDs away from the mains.

Addendum: While writing this review I overlooked another mounting option: you can actually get E27 lamp holders with Bowens S-type accessory mounts, thus letting your LED bulbs use the same accessories as pro-level studio lights. The lamp holders I have seen are available for Â£30 on eBay. I might investigate this further in a future article.

For teaching lighting in a workshop environment, I quite like these LEDs, because it encourages the use of improvised modifiers, such as separate diffuser panels and reflectors. In a home studio, this is a good cheap alternative to more expensive monolight heads. But if you need more control and are shooting professionally then a monolight-style LED head might offer more versatility. Check whether the extra effort associated with building a bulb-style lighting kit is worth the cost saving. Of course, if you stop using these after a while you can always use them to light up your garage. And they are cheap.

Thanks to Camfere for providing the light bulbs in this review.

As a special offer for Lighting Rumours readers, Camfere is offering 27% off Andoer LED bulbs when using the coupon code ANDOERLED27. That brings the price down to around $16/19 for each of these bulbs (no kick-backs for us). A bit of a steal even if just to experiment!