Magnum is a new range of flashguns from Aputure, a Chinese company. The first two models, the MG-68 and MG-68TL, have only recently been announced but I already have a pair in my hands to try out. Thanks to Aputure for providing the samples in this review.

If you seek a high-end speedlight with all the latest widgets, you might want to look elsewhere. Aputure’s debut Magnum line-up are quite stripped down with basic manual (MG-68) and TTL (MG-68TL) features and a sub-$100 price tag to match.

Let’s get this out of the way first. The Aputure Magnum units look so much like the MeiKe MK-930 and MK-950 that I’d be surprised if they weren’t made in the same factory. But they aren’t exactly the same and I hope the improvements I can see from the outside are matched by some on the inside. Namely, that the Magnums don’t drain your batteries while switched off – an infuriating issue we found with the MK flashes.

Straight out of the rather stylish box and its lush velvety case, the Magnum speedlight has a nice solid feel. Not a “I couldn’t fit this in my camera bag so I’ll kick it along the street and it’ll be fine” level of reassurance (c.f. Nokia phones), but good enough to withstand the odd knock. Squeeze it tight and it doesn’t creak. Swivel the head and it clicks resolutely. The battery door is probably the weakest link, but even that seems OK (though the polarity could be labelled more clearly).

One thing worth mentioning though: the tilt head doesn’t lock. Good for run-and-gun events work because it’s quicker to adjust, but not so great if you’re using on-flash modifiers like a Gami LightÂ since you can’t point it upwards with weight on it.

Controls-wise, there is not much to set the two speedlights apart in Manual mode or either of the optical slave modes, S1 and S2. TTL and Multi modes on the 68-TL are pretty foolproof, too. The instruction manual – should you ever need to read it – is clear and certifiably free of Chinglish howlers. In sleep mode, you don’t get the silly “SLEP” message seen on MeiKe speedlights; instead, for better or for worse, the screen just turns off completely.

One might expect it to be easier, from a distance, to read the settings from the back of the MG-68 with its blinky LED display rather than the fancy LCD screen on the MG-68TL. Not so: the labels on the 68’s indicator lights have been squashed into a tight space and aren’t so legible. More annoyingly, each diode spills light into neighbouring slots so the settings are ambiguous in the dark. I haven’t heard any such complaints from people using theÂ Yongnuo YN560, a similarly-specced flashgun that’s a few dollars cheaper. Still, no use crying over spilt light.

Aputure claim that the Magnum speedlights have a metric guide number (GN) of 48 at the 105mm setting, Iso 100. This seems to be exaggerated a bit: I measured only 38, around two thirds of a stop less. Zoom out to 35mm and that drops to 30. Recycle time did match the company spec of four seconds though.

So it’s no “monster of speedlites” in the brightness department.Â Size is another matter. Why are flashguns so massive these days? My first speedlight was a Nikon SB-600 and it would be tiny compared to this. The latest flash from Olympus is pretty titchy too. But all the Chinese companies seem to think that bigger is better, going for the beefiness of a Canon 600EX or a Nikon SB-910. It might not make much difference with only one in your bag, but if you’re a hardened flasher (not that kind) then the bulk of four or five of these devices takes up more room than a small monolight.

Here’s another tip: get rid of the Prontor/Compur (PC) sync port and include a 3.5mm jack instead. None of Aputure’s radio triggers has PC sockets so why should their speedlights use a different standard? 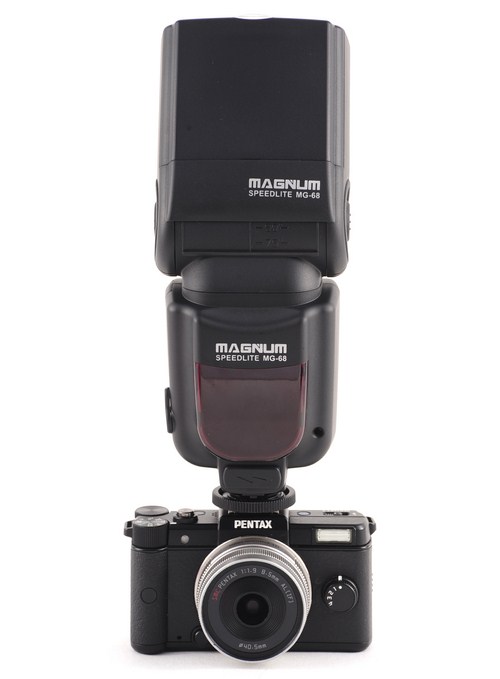 So what have we learned? The Magnums tick all the boxes for a basic flashgun without putting their heads above the parapet for too long. The MG-68 isn’t perfect and the MG-68TL isn’t a “monster of speedlites”. But the soft case is nice. There is no high speed sync and to date no Chinese speedlight offers this feature. A built-in radio receiver compatible with the Trigmaster 2.4G system would be ace, but might not be possible if Aputure aren’t manufacturing these in-house.

The Magnum 68 manual flash goes directly up against the Yongnuo YN-560Â with not much to differentiate the two in price or feature set. You might say that the YN-560 has established a reputation for itself, but the historically high failure rates mean it’s not really a good one. Maybe time to take a chance on Aputure? The MG-68 sells for around $80 on eBay, or Â£65 distributed within the UK.

Now the Magnum MG-68TL. At the time of writing, it hasn’t gone on sale yet and our verdict really depends on the price. A budget of $160 can net you a Yongnuo YN-565EXÂ orÂ Oloong SP-690 II, which have more advanced wireless features. A direct competitor to the MG-68TL would be the Triopo TR-980 or Pixco PG-708, so a price point of $130 or less seems fair.

Update: We now know the manufacturer’s suggested retail price for the MG-68TL is $129. Spot on! There’ll also be a smaller (hooray!) TTL flash called the Magnum MG-58TL, not dissimilar to the MeiKe MK430Â andÂ costing $109. It’ll work just like the 68TL but lacks a PC port or external battery input.

Update 2: The Aputure Magnum MG-68TL is now available on eBay.