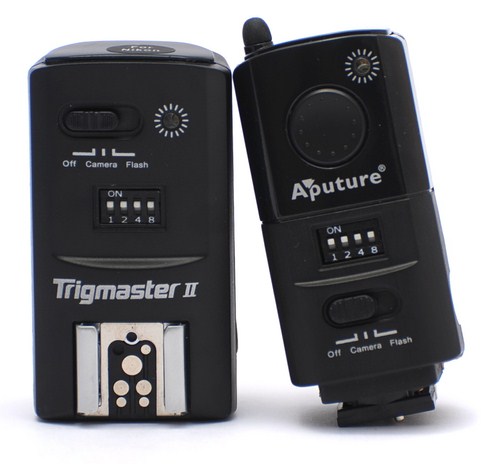 Aputure, a Chinese photo accessory manufacturer, are an interesting brand to watch. Their products are regularly and iteratively updated, balancing improved features with backwards-compatibility to keep new and existing customers happy. With a product range including bothÂ LEDsÂ andÂ flashguns, you might not have to look elsewhere for much of your lighting gear.

The latest release is the Trigmaster II, part of their expanding Trigmaster series of wireless remotes. It’s designed as a 2.4GHz flash trigger, superseding the previous Trigmaster 2.4G and complementing the Trigmaster Plus 2.4G transceiver. It includes various improvements; read on to find out more.

For those not familiar with the Aputure Trigmaster line-up, I recommend referring to the manufacturer’s web site or reading our past reviews:

There are two models in the series at any one time. The plain Trigmasters comprise separate basic transmitter and receiver units – put one on your camera and the other on your flash and they will talk to each other. The Trigmaster Plus is more advanced, working as a two-way transceiver so that any device can perform either task. In “Interlink” mode, the Plus works as both at the same time, setting off a remote camera and synchronising flashes with it in sequence.

The Trigmaster II’s wireless signal works at ranges up to 120 metres, according to the manufacturer. There are 16 different channels so you don’t interfere with other photographers using the same brand triggers. However, only five of these channels are compatible with the Trigmaster Plus. Being quite low-priced devices, the Trigmasters don’t transmit TTL information. Consult our flash triggering guide for a list of competing products that do. 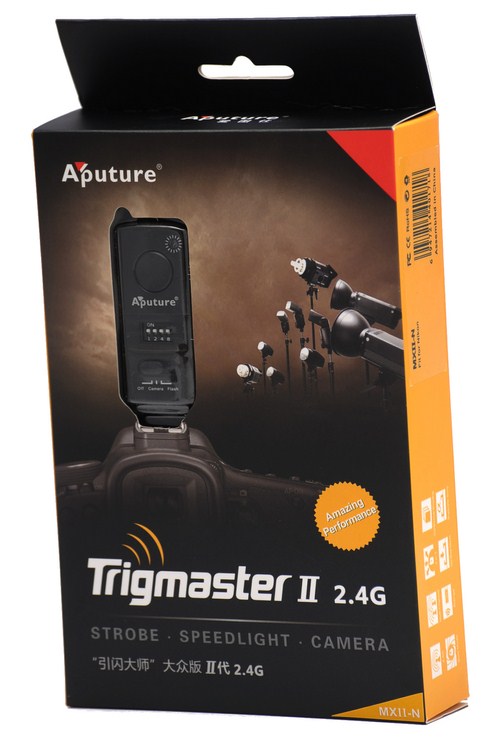 The Trigmaster II Â is sold in kits for Nikon, Canon or Sony. This is the first model from Aputure with a separate version to fit Sony’s non-standard hotshoe. It can also now trigger Pentax devices.

If you buy a kit, you’ll receive a stylish box proclaiming “Amazing Performance” – if the company do say so themselves. Aputure are quite keen on telling everybody how “amazing” and “perfect” their products are, but we’ll have to see that for ourselves! 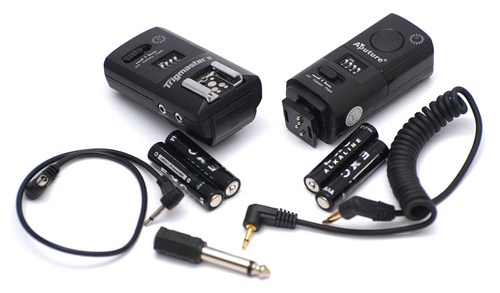 The box contains one transmitter and one receiver – extra receivers should be available separately. You also get some batteries and a sync cord thrown in. There’s no shutter release cable included, though, so you’ll have to get that separately. Look for one with a 2.5mm stereo plug on on end and the camera connector on the other -Â widely available on eBay.

One of my main criticisms of the 2010 Trigmaster and 2011 Trigmaster 2.4G was the odd, non-standard battery in the transmitter. Straight out of the box you’ll see that Aputure have listened to feedback and now use AAAs in the 2011 transmitter. Interestingly they’ve managed to fit it in without changing the external dimensions, so it raises the question why didn’t they do this in the first place?

The receiver takes AAAs, as before. The battery doors aren’t the strongest pieces of plastic so you’ll have to be reasonably careful with them. The transmitter foot is still plastic, which is a bit of a shame – many other triggers have stronger metal feet these days. There’s also no pin or locking wheel to secure it in your camera hotshoe and stop it falling out. While it fits snugly on my Nikon D700 and Pentax Q, with other cameras the experience may vary.

The transmitter and receiver have both received minor – but very welcome – improvements. The “Delay” self-timer mode has been removed. If you only use these for flash triggering you won’t miss this feature. On the transmitter, the “Off” position is now on the main mode switch, rather than on the side. Hopefully this should make it less likely to switch on accidentally in your bag. Another subtle change is that the “Off” position is on the end of the switch, rather than the middle, making it much easier to turn the devices off without having to look directly at the controls. 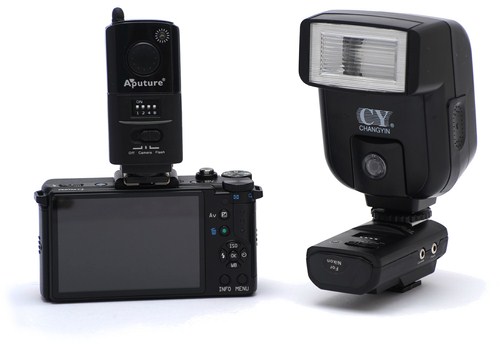 The biggest improvement to the receiver is that it’s now safe to use with old high voltage flashes. If you tried to use really old flash heads with the Trigmaster before, it will have fried your receivers. As far as I’m aware, the Trigmaster Plus isn’t rated for use with such units, so it’s a good idea to pick up some Trigmaster IIs if you want the Plus to trigger them.

In testing, the Trigmaster II had zero misfires in 200 shots, even in the presence of multiple 2.4GHz devices such as wireless studio lights and WiFi routers. With a Nikon D700, the maximum sync speed was 1/200 second – not the maximum 1/250 possible, but not terrible. Check our flash triggering guide to see how this compares to other triggers on the market.

The receiver has a plastic foot and a 1/4″ threaded socket. It screws on to tripods and light stands perfectly, or can stand on its own. If you’re using a coldshoe adapter than make sure it’s got a good clamp, since the Trigmaster receiver has no locking wheel. 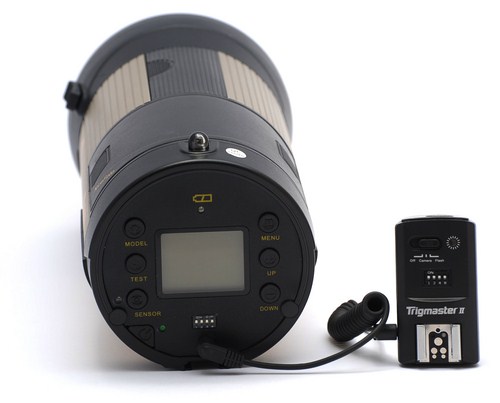 If you tend to use studio lights more than hotshoe flashes, the Trigmaster II caters to those too. Using the included sync cable you can connect your monolights and packs to the receiver’s “Flash” 2.5mm port. There is no way to connect the Trigmaster II to external power, so you’ll just have to make sure your batteries are charged if you’re using it regularly in a studio. 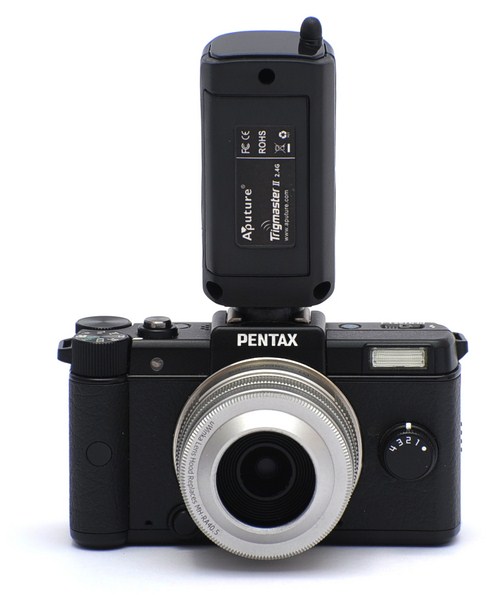 The Trigmaster II are so devilishly simple to use that I haven’t actually bothered to open the instruction manual. Everything is clearly labelled and just works. If you’ve used Aputure products in the past, as I’ve done, you’ll take to these especially well.

I’m still not convinced about having such a sticky-uppy transmitter sitting on the camera. It certainly looks cute, but on a heavy DSLR makes me worry about breaking it if I rest the camera upside-down on a table. It also looks quite prominent on the minuscule Pentax Q, shown above.

Moreover, without a flat transmitter you can’t have a hotshoe on the transmitter, therefore no TTL pass-through. The Trigmaster system also still lacks any form of wireless flash grouping. On the other hand, the Trigmaster II is many times cheaper than rival triggers fromÂ Ojecoco,Â PixelÂ andÂ Phottix, that have a transmitter hotshoe and grouping. So you might be missing some notable features, but you’re saving a good deal of money at the same time.

Overall, the Aputure Trigmaster II is still a great wireless flash trigger. It’s reliable, easy to use, works with all kinds of flashes new & old and now takes ubiquitous AAA batteries. You’ve always got the option to add the Trigmaster Plus 2.4G for more advanced functions and the potential for other Trigmaster 2.4G products in the future. While the Trigmaster series doesn’t have the features of higher-end systems, it doesn’t have the price point either, so you’re getting equal or greater value for money. Whether you can live without those extra features is down to your own needs.

The Trigmaster II will be available soon on eBay. Kits should be similarly priced to the Trigmaster 2.4G it replaces -Â around US$30Â each.