This week saw the release of Aputure’s B7c, an AC/DC Edison-screw LED bulb designed for practical cinema lighting. With wireless remote control, customisable colour and a built-in battery, the B7c promises to be a nifty little gadget for film-makers shooting on location.

However, it is just 7 watts, and generally speaking, RGB lights aren’t very bright. So while Aputure’s bulb might make some cool background effects, it is not necessarily designed for use as a main light, and at $70 it isn’t all that cheap, either. A brighter 15-watt model (possibly called the Aputure B15c) is planned for the future.

What other LED photography bulbs can you get?

In previous reviews, we looked at corn- and mushroom-shaped LEDs with claimed wattage of 135 watts (though actually only 45 watts). These lamps, which fit cheap E27 bulb holders, were big, bright, cheap, silent and daylight-balanced. I also tried out the Life of Photo fan-cooled LED bulbs, which offer similar power in a smaller form factor if you don’t mind added background noise.

That was a few years ago. What about today?

It looks like Bowens-mount E27 lamps are no longer on sale, but you can easily bodge your own with an S-fit bracket and an standard lamp holder, as shown in this video.

Meanwhile: there have, in fact, been some developments in the oft-overlooked market of cheap-as-chips, silly-bright E27 LED bulbs. None are quite as all-singing-all-dancing as the B7c, or as beefy as modern LED monolights, but the aim here is to build a studio lighting kit on a minimal budget, or to replace old fluorescent bulbs. Then if they don’t quite fit your needs, put them on the ceiling for the brightest garage/shed/cellar around.

The first innovation is a bit of output control. You are no longer stuck with a single brightness or colour temperature, thanks to the introduction of bi-colour and variable-output E27 LEDs. As with other LEDs the basic principle is the same: you have a mix of two different colours of diodes and adjust their relative brightness to get the desired colour temperature mix or overall intensity.

Since you usually have these bulbs screwed into an ordinary lamp holder with just an on/off switch on it, some bulbs offer very primitive bi-colour control, switching between colour modes when you power the light off and on again. These are much cheaper but not very flexible. One example is this one for $15. For most of the new generation of bulbs, however, the way you make adjustments is with a short-range radio controller that looks a bit like a TV remote.

Andoer, or Selensâ€”depending where you lookâ€”are now selling bi-colour versions of the passively-cooled ‘mushroom’ type LED bulbs. Claimed power varies between 50 and 100 watts, but these numbers tend to be complete fictionâ€”most look similar in size to the 45-watt bulbs we tested, so are probably 50 watts or less. In the one pictured below, there are 140 individual diodes. With a wireless remote (claimed range 7â€”8 metres; about 20â€“25 feet) you can adjust the brightness from 1â€”100% and colour from a warm 2800K to a neutral 5700K, and there are quick-access buttons to quickly get to the coolest, warmest and middle settings. It’s typically sold as part of a cheap and cheerful $50 studio lighting kit including a cheap stand and softbox, or on its own for around $20â€“25, available on Amazon, eBay and AliExpress.

There are lots of generic-looking similar bulbs, but the specs aren’t all the same. For instance, some unbranded mushroom bulbs have a white remote, rather than black, and apparently can only be adjusted down to 20% of full brightness (though still steplessly), with 3000â€“6000K colour temperature control; available for $25 on AliExpress.

For the most partâ€”as we discovered in past reviewsâ€”sellers like Andoer just put their brand on it and don’t appear to know what they are selling. I think many of these bulbs are manufactured by a company with one of the best brand names ever: YooCheese, which is a trading name of Nomila Technology.

Here’s another, with a black heatsink, a green remote and a specified wattage of a whopping 150 watts; yours for $38 on AliExpress. This is definitely a more powerful unit than those above, as you can tell by how wide the body is relative to the thread, and that it has 240 diodes in it, weighing in about 700 grams. Colour temperature adjustment goes from 3200 to 5500K, there is ‘stepless dimming’, and a colour rendering index (CRI) of over 90, according to the spec sheet. 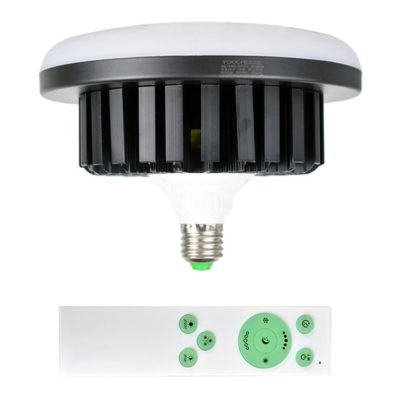 This one is branded YooCheese, though the seller flipped the image (I’ve flipped it back again). It’s so wide that you’ve got no hope of pointing this into an umbrella, as the shaft won’t clear the head. But if silent operation is essential, then this is basically the only way to keep the LEDs cool.

Need something a bit more compact? US-based company Savage sells a 50-watt, E26 bi-colour bulb that looks rather like those in our fan-cooled bulb review. It is dimmable and colour adjustable from 3200K to 5600K using a small remote with a 50-foot operating range. It has a claimed intensity of up to 3000 lumens at 1 metre. The specs don’t say if it is fan cooled, but it looks a bit too small for passive cooling. Price is $62.99 for a single bulb, available from the Savage web site. 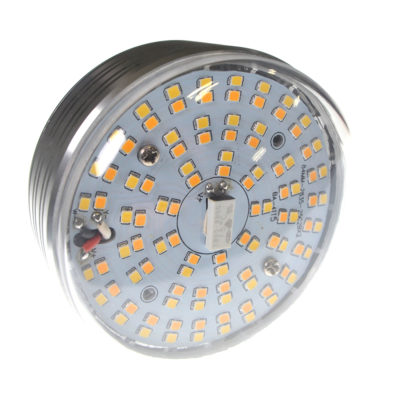 Meanwhile, Westcott sells a very similar bulb that is dimmable, but not bi-colour. It comes with an orange diffuser cap so you can still balance it with warm lights. It will set you back about $45.

Colour control isn’t everything, as it means you sacrifice brightness by having a mix of LEDs and not all of them switched on at the same time. What if you want the brightest light that (not very much) money can buy? Well, now the bulb manufacturers have upped their claimed power to a whopping 200 watts. The necessity to keep the circuitry cool has not gone away, or the technology to do so improved all that much, so these bulbs are absolutely gigantic. It’s at this point that you should really start to consider getting a COB monolight instead. However, there is something fun about ludicrously oversized light bulbs, even if they don’t make for the most practical home studio.

Give up your dreams of pointing one of these into a lighting umbrella, as the shaft won’t clear the bulb. But you might be able to get one in a big softbox, or even just use it bare, as it’s so large it might be a large light source in its own right.

The main Chinese manufacturer of these types of bulbs is Nomila, aka YooCheese, though it’s not always easy to find them available for retail. The bulb I want to mention here is this 200W mammoth, the YC-200, which is available in bulk for about $25 per unit (min order 20 units), though really I only want one of them. According to the specs, there are 136 LEDs in the bulb and you have bi-colour control from 3200 to 5500K. It weighs 900 grams and has a built-in cooling fan in addition to the huge alloy heatsink. Depending on how noisy it is, it might be a bulb just for stills photography, or video production without live audio. 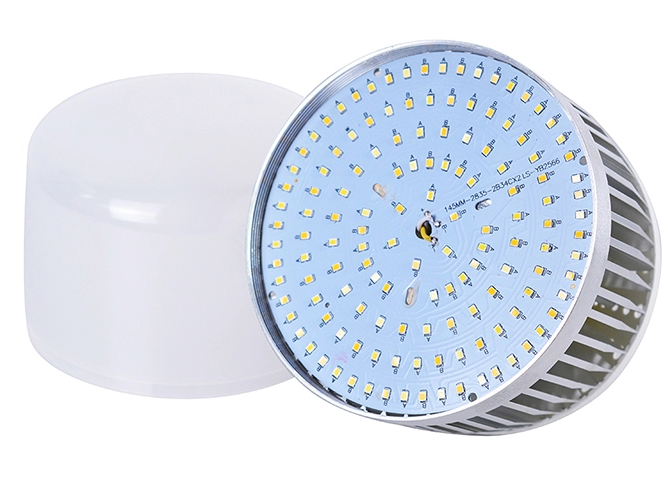 However, the bulb you really want is the 300W version. It’ll set you back about $56 on AliExpress and is specified as 5500K only, so you’re just getting daylight-balanced light. I am not sure what the best name for this shape is: it’s not a corn light or a mushroom, but more like a jug from an office water cooler.

Also from YooCheese is an 150W LED that might best be described as the shame of an ice cream (or an Olympic torch), available on eBay for $50. 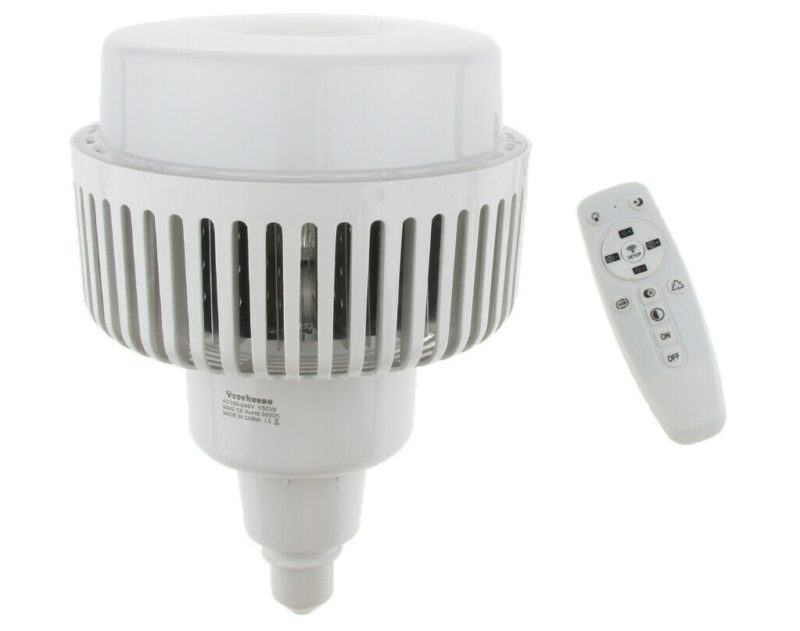 I have not had the chance to try any of these bulbs yet. It’s not helped by how elusive retailers are to give brand names, model numbers and accurate technical specifications; there’s no point reviewing one of these lamps if it’s impossible to find the exact one for sale. Plus, if you spend a bit more money, you can get yourself a dedicated COB monolight with a Bowens accessory mount.

Nonetheless, as far as Edison-screw photographic LED bulbs go, is the Aputure B7c really the most fun you can have for $70? Share your thoughts/experiences in the comments below.