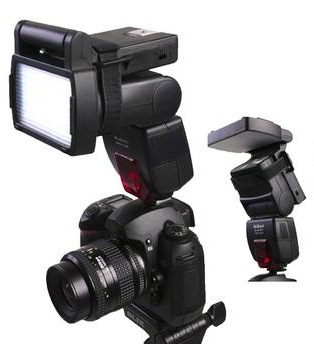 Dot Line Corp, an American company, have started selling an accessory enigmatically named the DL-SL60 Bounce Hybrid Light Panel. So what actually is it? Well, something that’s quite wacky but at the same time rather clever.

One way up, the accessory acts as a conventional 60-LED panel to mount on your DSLR for stills and video lighting. 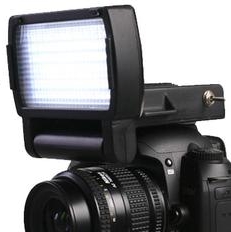 So far, so good. Now, flip the device over and you have something unique. A strap-on speedlight accessory that’s an LED video/modelling lamp on one side and an impromptu bounce card on the other.

Why would you want something like this? Dot Line CorpÂ say,

One of the major problems for users of DSLR hybrids that do both still and HD video is having a sufficient light source for both mediums [sic]. The DLC LED Light for Speedlites solves this problem.

The panel takes four AA batteries and can be switched between full and half power. It mounts to SLRs with standard hotshoes and a Sony iIso adapter is included in the box.

The Dot Line LED Light Panel for Speedlites has a recommended retail price of US$119.95. You can find it on eBay for $100.