Especially in Germany there’s a big hype about light modifiers. If you enter a German photo studio, you usually find many different light modifiers in all sizes and types. But for me, it’s far more important to understand light than owning a bunch of modifiers, not knowing how their light will look like. That’s why I always recommend to start with only one or even with no modifier at all! Get to know your equipment until you can easily predict, how your picture will look like before taking the shot. But this should be enough for the introduction…

Today I want to explain, how you can achieve photos like the following without any light modifier: 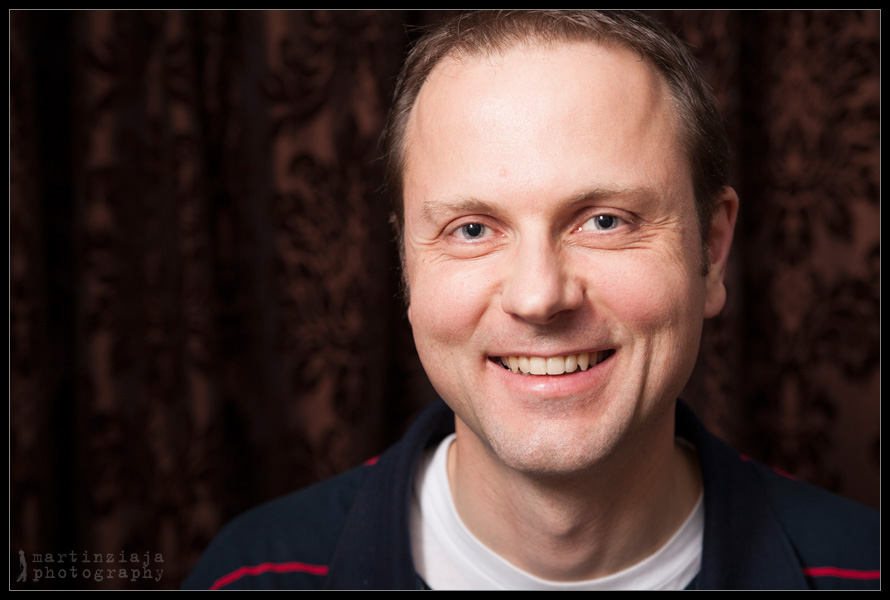 Yes, it looks like being lit by a softbox, I know, but it isn’t! And do you know what’s even better? It’s lit by a single on camera speedlight without any modifier! The magic formula is “bounce technique”…

I positioned this workshop participant close to a white wall in my studio, swiveled the flash head all the way to the left to make sure, that absolutely no – and that is important – NO direct light from the flash head reaches the subject. Why this is so important, I will explain later.Â  By firing the speedlight against the wall, the illuminated part of the wall becomes our lightsource. That means by zooming your flashead in or out, you can get softer or harder light, because of the area on the wall hit by the flash! That’s it. And the coolest thing is, that you can use this technique even in full auto mode (if you like)!

A common mistake is, that you turn the flash too less away from the subject. Then, direct and thus hard light from the flash hits the subject, resulting in a double shadow which is not really flattering. Below you see a detail shot for comparison:

On the left you see the result when your flash head is not turned far enough to the side. You can clearly see, that the direct flash produces these harsh shadow edges around the nose and below the chin. Also the light fall off has changed. While letting direct light hit the subject, we have a shorter light to subject distance and this results in a higher fall off!

To prevent the flash from hitting the subject directly, you can also use little gobos/flags on your flash that shade your subject. Position your subject close to a neutral painted wall, turn your flash against the wall, make sure no direct light hits your model and you will get an evenly lit portrait with beautiful soft light. This is probably the easiest way to achieve portraits from an on camera flash with the look of a softbox lit image.

So try, play around and experiment with your bare flashes. Once you master different bounce techniques, you can get rid of many lightformers…

In one of my next tutorials, I will show you how you can use this technique for 3/4- or even full-length shots. So keep on checking the site!