As promised in my previous post, in todays tutorial I want to show a way to use bounced light for 3/4 or even full body shots. For the following example, all you need is a speedlight off-camera, a neutral coloured wall and something to prevent the flash from hitting your subject. The result should look like this:

The light is very even and soft though still directional, which gives shape and dimension to the body. In the background on the left you can see some light passing through a window, casting a shadow pattern on the wall. My basic exposure was set on that light on the background. The problem was, that my model was standing further in the middle of the room, so the windowlight drops quite a bit until it reaches her. So my main aim was to set a mainlight that suits the available light – I didn’t want an overly lit look.

On one hand, I could use a fairly big modifier like a 60″ umbrella camera left, which would result on a similar light on the model’s body. But the fall of would be considerably higher, because the distance from the lightsource to the model would be much shorter (there are only about 2m space to the left)! So I chose a different approach to get a more natural look.

I set a simple radio triggered speedlight on a stand just outside the frame on the right hand side. To get this directional light simulating the windowlight on the background, I pointed the flash head about 90Â° away from the model’s face, hitting the wall camera left and made sure, that no direct light from the flash hits my model. In my case, I used a not too tight gridspot, but you can use flags or sometimes even zooming your flashhead to tele setting is enough.

(Editor’s note: After requests in the comments , I added the following lighting diagram – I hope that helps and clarifies things… If not, let me know!) 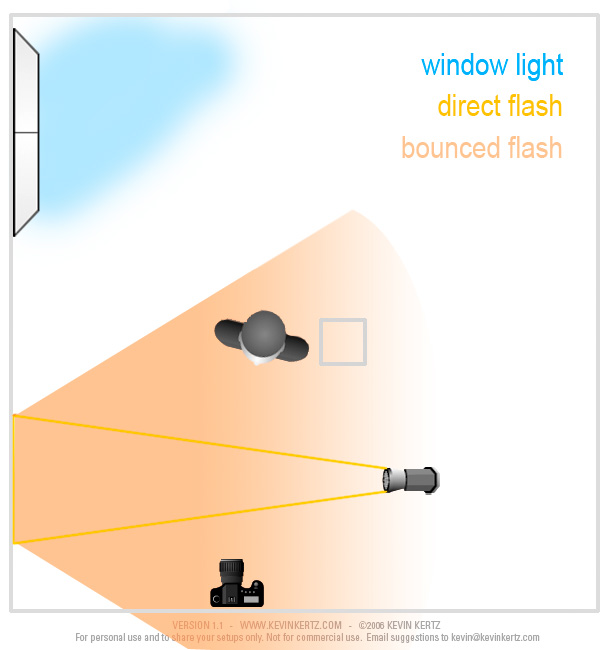 Be sure to point the flash quite high on the wall to imitate the natural direction of light. And because you get a quite directional light, often it’s good to ask your model to turn her head towards the reflecting wall. That’s it!