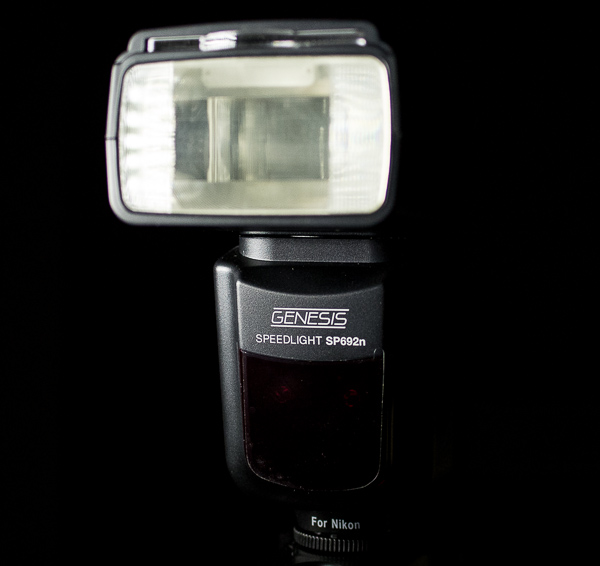 Calumet UK were kind enough to lend a Genesis Speedlight SP692 for review, giving us the opportunity to see whether the company’s debut shoe-mount flashgun is as good in real life as it appears to be on paper.

Just announced last month, the Genesis Speedlight SP692 comes in two flavours: the SP692c for Canon E-TTL and the SP692n for Nikon i-TTL. We have been testing the latter, which offers advanced wireless master and slave functions in the Nikon Creative Lighting System (CLS) as well as manual mode and on-camera TTL exposure control.

The inclusion of master mode (“Commander mode” in Nikon-speak) along with an external power socket, a sync port and the device’s large size pits the Genesis SP692n against Nikon’s professional-level flashgun, the Speedlight SB-910

, which costs twice as much. Buying the Genesis, are you thereby getting twice the value?

In the hand, the SP692’s build quality seems to stack up well against the competition. It feels just as sturdy as the Canon 600EXÂ and the latest flashguns from YongnuoÂ though perhaps not quite as over-engineered as the heftyÂ Godox Witstro. The connections on the side (pictured below) have a protective cap to keep the dust and the elements out and the Prontor-Compur jack is a threaded type to keep sync cords plugged in securely.Â The mounting foot is made of metal and has a locking ring so it remains firmly in the hotshoe of your camera. 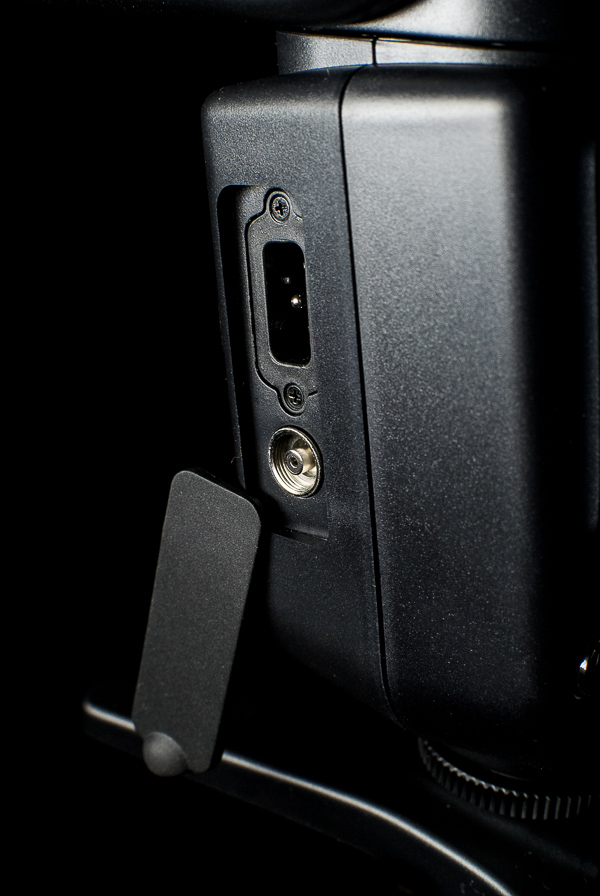 So far, so good. However, the mechanics of this speedlight are not faultless â€”Â the SP692’s flash head cannot tilt below 0Â° (horizontal), making it not very suitable for very close-up shooting when mounted on the camera. If you try photographing a subject closer than one metre, the flash beam aims too far above the subject, leading to uneven and over-exposure in TTL and matrix metering mode. Perhaps a trivial complaint.

More importantly, the flash tilt/swivel mechanism cannot lock into any position, so the SP692 is not a good choice with head-mounted speedlight modifiers, such as GamiLightsÂ or even some of Calumet’s own accessoriesÂ unless one does not mind gravity dictating which way the flash points. Oops. Still, probably not a deal-breaker for most people. 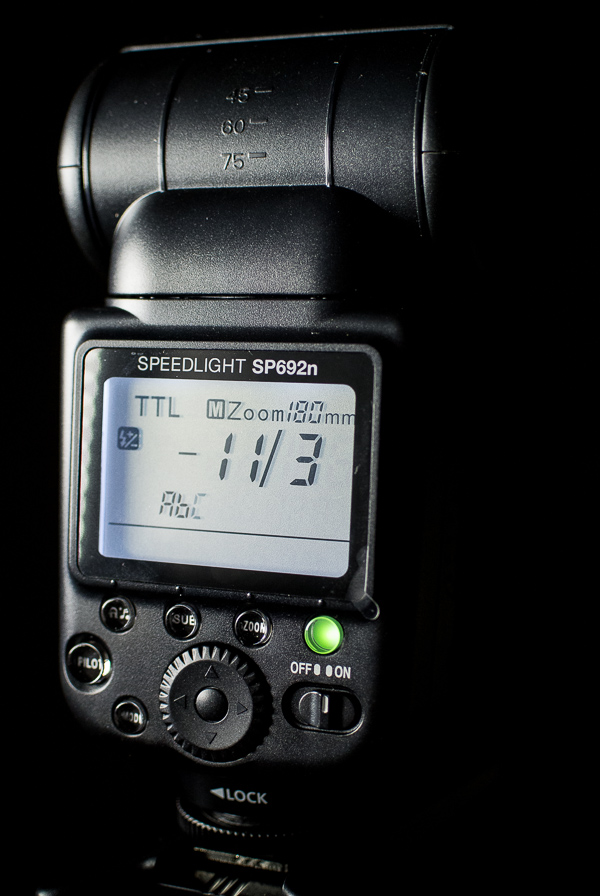 On to the user interface. The Genesis has a large, backlit LCD screen like found on more expensive Canon and Nikon flashes, with a fairly conventional-looking set of buttons beneath it. This apparent similarity to its rivals ends, however, the moment you pick up the SP692 and try it out for yourself.

The Genesis user interface is nothing short of appalling. On electronic devices like this it is to be expected that some processes (such as adjusting the power level) will be more involved than others (setting up a wireless flash system). But in truth the SP692 falls short in almost every area.

What looks like a rotating control wheel is actually a four-way directional pad in disguise. Which wouldn’t be such a bad thing if it weren’t so rubbish. You press [Left]/[Right] to adjust the exposure settings in whole stops and [Up]/[Down] to fine-tune it in thirds of a stop. Or that would be the idea, except you can’t have negative fractions and your fine-tuning is promptly forgotten as soon as you change power in larger increments.

For example: if you are in TTL mode with +1.0EV of flash exposure compensation, to get to +0.7EV you first need to press [Left] to get back to +0.0EV and then press [Up] twice. But imagine you then wanted to get from +0.7EV to +1.7EV. Press [Right] and you get from +0.7EV to +1.0EV (it has forgotten about the .7) and then you need to hit [Up] twice more to get your fine-tuning back. This becomes all the more confusing when you are dealing with negative exposure compensation, especially as the numbers on the screen are all the same size, giving readings such as “-11/3” (above). 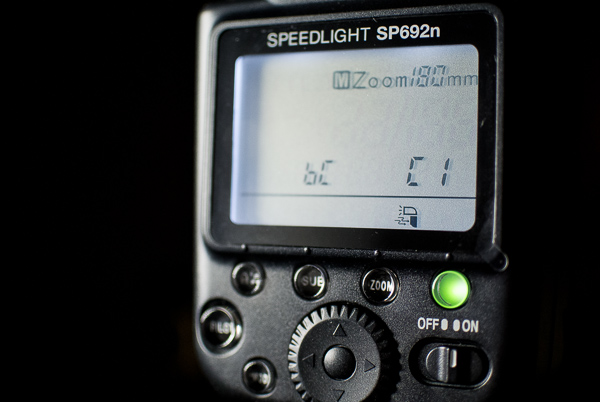 While the basic functions such as manual and TTL mode may not need instructions, you will inevitably need to delve into the user’s manual when it comes to configuring Advanced Wireless Lighting (AWL) for your multiple Nikon Speedlight setup.Â The 33-page booklet certainly covers all the different modes but is littered with typographical errors, including one on the very first line.

Setting up AWL/CLS is also irritating in practice, since there is no way to review all your different wireless groups at once. From the main screen (above) it is only possible to see which remote groups (A, B and C) are switched on â€” not whether they are in TTL or manual mode or their respective power levels. To check individual settings it is necessarily to cycle through each group as if adjusting them. With such a large screen, why waste this opportunity and all that space?Â Controlling the built-in flash on my Nikon D700 through the camera menus is a far more pleasant experience, which kind of defeats the purpose of buying a Commander-enabled flash unit in the first place.

I am sure people would be happy to live with a clunky menu system if the raw light output made up for it. But it doesn’t. At full power, the same zoom length and identical camera settings, the Genesis SP-692n measures 0.9 stops less bright than the Yongnuo YN560-III. That is, the Yongnuo flashgun is nearlyÂ twice as powerfulÂ under the same conditions. The output of the SP-692 is also a tiny bit warmer than that from the YN560-III. And the YN has much nicer controls to boot.

Still, does all that matter in practice? In actual use, the Genesis SP-692n gives very satisfactory results in TTL exposure mode on camera, even in the challenging conditions I set for it: a rare sunny day in Scotland with the subject backlit against the evening sun (below).

Taking the flashgun off the camera hotshoe, the story is similar. TTL exposure is as consistent as you can reasonably hope for, and the wireless slave sensor is sensitive enough to work with the Nikon D700’s pop-up Commander flash from a couple of metres away in sunshine. But the inherent limitations of optical wireless transmission are there: point the master unit too far in the wrong direction, or step too far away and the signal just doesn’t make it. Radio triggers are better outdoors.

Despite the relatively low power output, the Genesis flashgun is still strong enough to contend with the sun at close distances, as shown in these shots (taken at Salisbury Crags, Edinburgh). But the lack of HSS meant I was always limited to maximum shutter speed of 1/200 second, forcing me to pick extreme lens apertures like f/22. The SP692 won’t stop you from taking pictures, but in certain situations you will find you need to push both the flashgun and your camera to their limits.

On the opposite extreme, this flashgun is actually very good in the dark. Even at a focal length of 300mm in a pitch black room, the built-in red AF assist lamp helps provide an accurate autofocus lock every time.

Most disappointing in our outdoor testing was the overheat protection on this flash unit. Shooting on a cold day, the device had a hissy fit and started bleeping in protest after just a couple of dozen shots, most of them at less than half power and none in quick succession. Taking the batteries out, they were barely lukewarm, whereas in the past I have shot hundreds of shots at events with a Nikon SB-600 set to 1/2â€“full power and it has only given in when flashgun was ready to burn my fingers. (Admittedly, this might be why I don’t have a working SB-600 any more…)

Perhaps Calumet wants to take the “better safe than sorry” approach but this won’t appeal much to anybody hoping to use this for high intensity events.

I was looking forward to the Genesis SP-692. A cheap flashgun from a reputable dealer with features comparable to the big brands â€” what’s not to like? Unfortunately, it has been a disappointment. Calumet’s first speedlight is let down by its terrible user interface and is only really unique in the features it lacks relative to the competition.

For more raw power and a far better user experience you’d be better off with something like the Yongnuo YN560-III for less than half the price. If wireless TTL is really important to you, the master/commander mode on the SP692 is too clunky to be worth the cost saving over a Nikon or Canon product, a Metz or Nissin offering or a set of high-end third-party radio triggers.

The Genesis SP692n for Nikon and SP692c for Canon are available now from Calumet UK for Â£149 each. Calumet also has operations in the USA, Netherlands and Germany. Thanks to Calumet UK for providing the sample in this review.