This March, Canon announced their RT wireless system, the first flashgun series from a camera manufacturer to incorporate built-in radio control. The Speedlite 600EX-RT and Speedlite Transmitter ST-E3-RT received comprehensive coverage on the various photography news web sites but Lighting Rumours was one of the first and only outlets to report on the Canon 600EX, ostensibly the non-radio replacement to the top-of-the-line 580EX II. The latter has now been discontinued.

Thanks to Canon UK, we were sent a sample 600EX to review. Earlier we tested it with the Pixel King wireless E-TTL triggerÂ for the benefit of anybody considering mixing it with the 580EX II, 430EX II and third party E-TTL flashguns without having to resort to optical transmission. Here is our more generalised write-up on the 600EX. 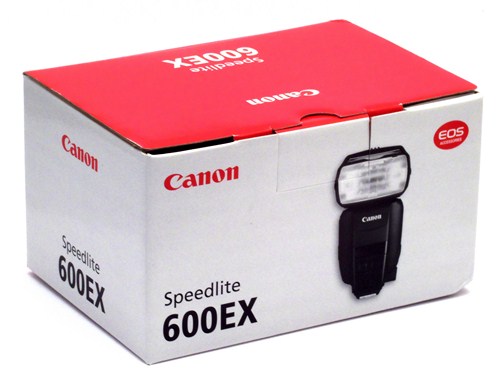 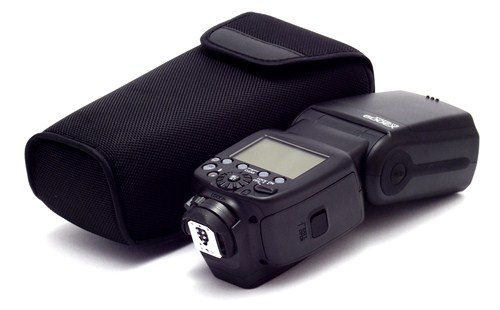 Unboxing the 600EX, you get the flashgun itself in a protective case, plus various bits of literature. Extra knick-knacks include another, lighter duty soft case, a table-top flash stand, a proprietary gel holder and an orange (CTO) filter for it. Like with the SB-900 series from Nikon, the flash will automatically detect when the colour correction gels are fitted.

The manual is a fairly hefty one, split into two volumes to accommodate seven different European languages. Fortunately the instruction manual for any single language is not much more than 100 pages. Some past Canon photography products have been difficult to use without consulting the book of words to find out what all the Custom Function codes mean. I am pleased to say that this is no longer the case for the Speedlite 600EX. 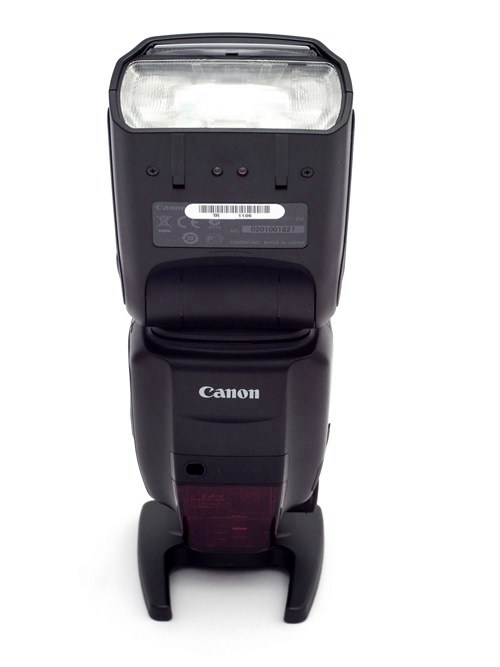 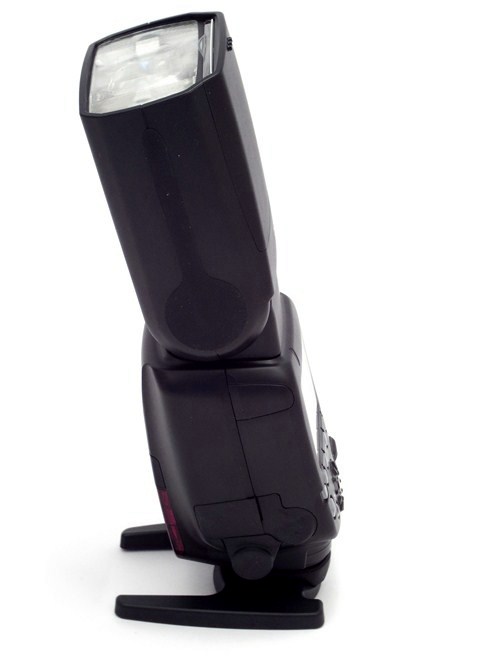 This flashgun is a pretty big one, in similar style to the 580EX II. The tilty, swivelly head can turn 180Â° left and right or nod vertically from -7Â° to 90Â°. It’s locked in place until you squeeze the catch in the pivot – good for someone who wants it to stay put (for example holding a small softbox) but a minor irritation for others who like to change the flash head position frequently. The body is all made of sturdy strong plastic, which should certainly survive the knocks and shocks expected from professional use.

The hot shoe foot has a rubber flange to keep the elements out and uses a sliding locking pin instead of a thumb wheel for secure mounting. 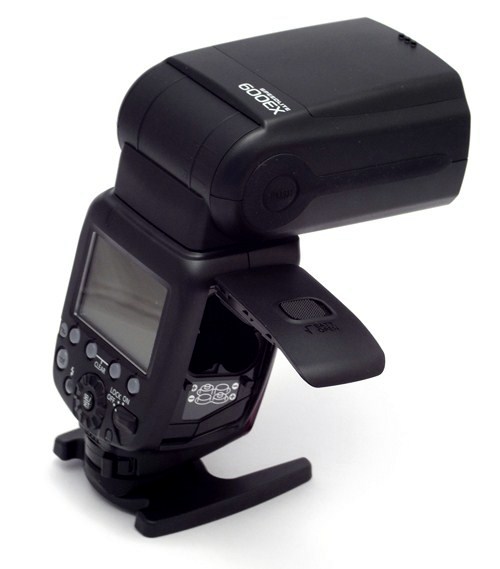 Like the 580EX II, the battery compartment has an extra lock so that it doesn’t open by accident. The terminals are clearly marked inside. 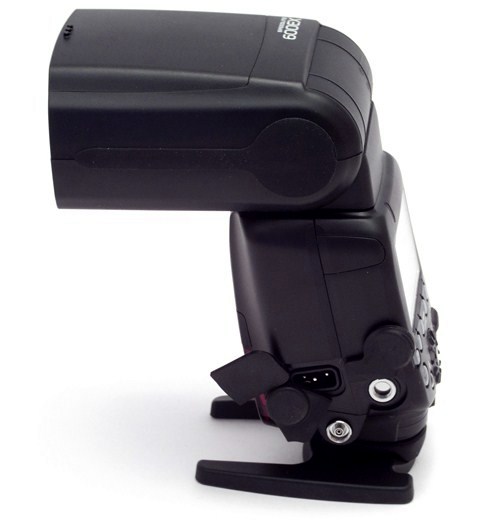 On the left hand side you’ll find a high voltage battery input, an outdated PC sync port and a 1/4″ tripod socket, all covered by rotating rubber caps. In this case, Canon haven’t been bold enough to update to a more reliable 3.5mm sync port like that found on the LumoPro LP160.

What does the 600EX offer over the 580EX II it replaces? The increased metric guide number of 60 is so close to 58 that it’s hardly worth remarking on. The 600EX doesn’t have the radio transceiver inside like the 600EX-RT, so we still have the same optical transmission found in the 580EX II.

Where you’ll notice a real difference is in the ease-of-use. The 580EX’s old-fashioned LCD looks more like a pocket calculator whereas the new 600EX’s larger screen is closer to a mobile phone, using a dot matrix layout that’s much clearer and more versatile. The labels and symbols are much easier to understand, as are the buttons used to control them. Should you want your perfect set-up not to be disturbed, simply set the power switch to “Lock” between the On and Off positions. 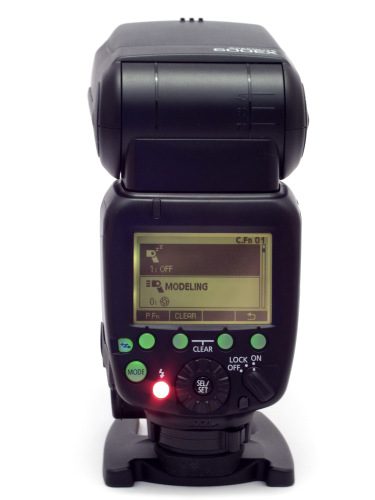 Each of the buttons (except the Select/Set one) are now backlit so you can see what you’re doing in the dark. There is also now a dedicated wireless button that will instantly switch your 600EX between master, slave and normal modes. As someone who rarely uses Canon, I’ve dipped into the instructions briefly once or twice and now feel comfortable enough that I won’t need to refer back to them again. The buttons give a reassuring feedback – easy to press but unlikely to break quickly.

Rather than labelling the settings with the impenetrable “C.Fn #” alone, there are clear symbols and descriptions of what’s going on – further elaborated in the manual in case you’re unsure. The only thing I found slightly annoying is there is no obvious way to jump instantaneously back to the main screen – you need to hit the Back button a few times and it’s not always in the same place.

After 90 seconds the power saving function will switch the flash off – disconcerting since the screen goes completely off and you think the batteries have gone dead. Speaking of which, there’s no battery indicator and that would have been a nice addition. Fortunately you can turn off power saving. 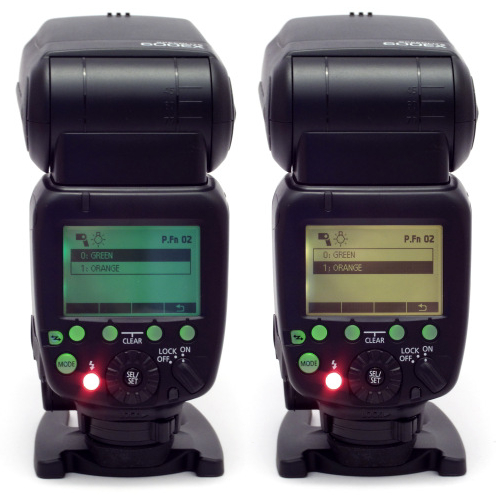 Other essential customisations include switching the distance scale from imperial to metric, adjusting the behaviour of the modelling flash and various optical transmission settings. One non-obvious feature of the 600EX is the ability to switch the LCD backlight from green (default) to orange. It’s hardly something you’d pay several hundred pounds extra for, but it does actually have some semblance of usefulness. You can set up the flash so that it is one colour in master mode and another in slave mode, which is much more immediately noticeable than the ambiguous symbols on the screen.

Canon reckons the full power recycling time is 3.3 seconds. This is with fully-charged new batteries. Use knackered AAs like I have and you’d be lucky to get a recharge in 5 seconds or more. Of course you can plug in an external power pack to speed up the process. 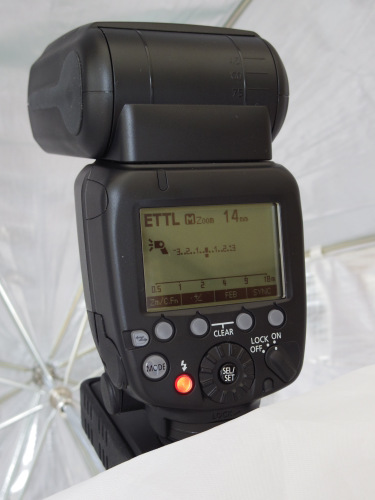 In usage, the E-TTL exposures were spot on, even off-camera with wireless triggers. Check our tests with the HÃ¤hnel Tuff TTL and Pixel KingÂ for more details.

Overall, the 600EX is a much nicer flash to use than the 580EX II. It’s not really any more powerful, nor does it add significant new features, but the control interface is vastly improved. Not everybody will be excited by an LCD that can turn orange, but events photographers, among others, will surely appreciate such additions as backlit buttons and clearer menus.

It’s a shame then, that some customers – such as those resident in the USA, for example – won’t be able to get their hands on it. Canon USA haven’t even listed the 600EX on their web site, demonstrating a high level of confidence by the distributors there that they can wean people off the 580EX II (which has been discontinued) and into the 600EX-RT system without introducing the 600EX. Will their gamble pay off?

Upon announcement the UK RRP for the 600EX was Â£639.99, with the lowest price currently Â£500. At the moment the radio-enabled 600EX-RT is listed for just under Â£600. What people will actually pay for a flagship system flash (without radio) is actually somewhere between Â£300 and Â£400, if the following price watch graphs are anything to go by.

Disregarding the RT system for a moment, Nikon’s Creative Lighting System (CLS) arguably more than matches Canon E-TTL II, so it seems silly for the 600EX to cost so much more than the Nikon SB-910 – especially in a double-dip recession.Â Indeed, it’s not too great a leap in price to the bare-bulb workhorseÂ Quantum QflashÂ system, which also has advantages.

But maybe I’m wrong: this is certainly a decent flashgun, worth buying, so maybe customers will stump up the extra money for it. Would you? Once shelves are cleared of the last 580EX II stock, you might not have any choice, except for third-party options such as the Nissin Di866 Mark II and Mecablitz 58 AF-2.

The Canon Speedlite 600EX is currently on sale at Bristol Cameras and 1st Cameras. There remains a question mark over whether it will go on general sale in Britain. Our contact at Canon UK said they would “chase it up” but haven’t been able to give a definitive answer yet.