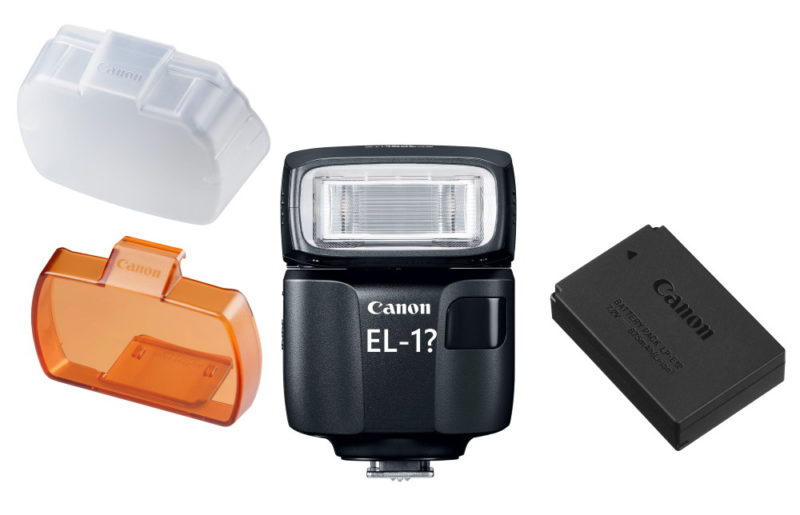 Canon may be about to announce a new flashgun for its mirrorless EOS M-series cameras. According to the Japanese Twitter account Nokishita, the Speedlite EL-1 will be unveiled alongside an EOS M50 II mirrorless camera.

Accessories to go with the flash have model names including ‘SCF-EL’, ‘SBA-EL’ and ‘LP-EL’.

Canon Speedlites usually use the nomenclature ‘EX’, such as the 600EX II-RT and the 470EX-AI, however a couple of years ago the brand introduced the Speedlite EL-100, a low-end bounce flash to accompany the then-new EOS R-series cameras. We can expect the EL-1 to be a higher-end product, based on the existence of accessories, and the assumption that it will complement rather than replace the EL-100.

We infer SCF stands for Speedlite Colour Filter (or equivalent) as Canon already sells an SCF-E3 clip-on filter set for the 600EX II-RT. Thus the SCF-EL will be a similar set moulded to fit the EL-1.

LP from Canon usually refers to lithium ion batteries for cameras, so we can expect the Speedlite EL-1 will have proprietary LP-EL lithium batteries, as is already common among competing products from Godox, Yongnuo and HÃ¤hnel. It’s probably safe to say it’s not just the battery for a co-announced camera, due to the ‘EL’ suffix. If so, it would be the first lithium Canon flash. Lithium-ion batteries in flashes tend to result in faster recycle times than ordinary alkaline or NiMH AA batteries.

Update: this product has now been officially announced.