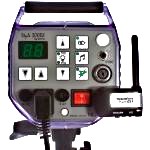 Canon Rumors reports on a rumoured “680EX” Speedlite to fit in alongside the 580EX II in Canon’s range of hotshoe flashes. The new model will apparently be released in the second half of this year, featuring full wireless E-TTL support, a better user interface and a guide number of 68 at 105mm zoom.

DSLR-Forum users have spotted a listing on the Metz web site of an unreleased 58 AF-2 flashgun (for all major camera brands). It comes to a dead page so no specifications yet. Read some speculation at Speedlights.net.

Rob Galbraith has been testing out the PocketWizard ControlTL for Studio.  New features include auto-adjusting of your studio light’s power as you change your Iso/aperture/flash compensation:

… the flash’s power level can track in step with changes to aperture, ISO or both. You choose the desired tracking combo in PocketWizard Utility.

Camera body flash exposure compensation (FEC) can also be applied to boost or cut brightness to all Auto zones simultaneously.

and using your PocketWizard MultiMax as a remote power controller:

A MultiMAX configured to be a transmitter will be able to individually adjust the manual power level of up to three zones of remote flashes, in 1/3-stop increments, whether the flash is a Speedlite on a FlexTT5 or a studio flash connected to one of the new power control modules. It will be possible to turn a flash zone on or off too, and the power range settable by the MultiMAX will be full to -9.0 (if the flash supports it).

All related bits and bobs – the PowerST4 Elinchrom receiver, AC9 Alien Bees adapter and AC3 ZoneController – will be released in the next couple of months.