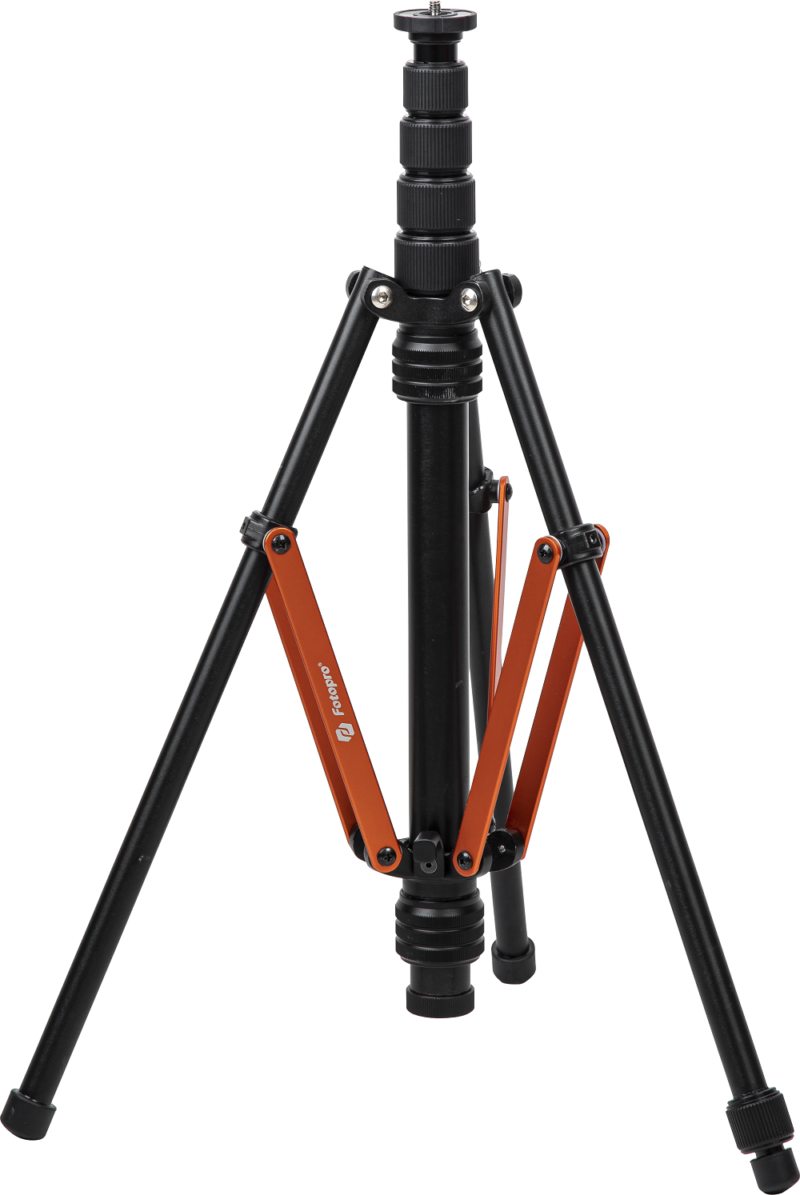 Carbon fibre is common in camera tripods, bicycle frames and other applications but it is only in the last couple of years manufacturers have started using it in photographic light stands.

But who needs an ultralight light stand? Won’t it just fall over?

Some photographers do need heavy duty supports, either to bear the load of a high-powered studio head or to hold up a large softbox without it blowing over in the wind. Counterweights help, too. But for those using speedlights, small LEDs or modern off-camera flashes (and modestly-sized accessories), a light duty stand may be enough.

So what are your options?

Nissin’s LS-50C was the first light stand we know of to feature carbon-fibre centre column. It had a claimed weight of 545 grams, folded down to 48.5 cm long and had a maximum height of 200 cm. It featured a levelling leg with adjustable angle for use on uneven ground, and a hook for hanging a sandbag for stability. The legs were aluminium, but drilled to save weight. At the time of writing the LS-50C appears to be discontinued.

A couple of years ago Phottix released their own cheaper alternative, the Padat Carbon 200, with a carbon riser column, the same specified operating height and a levelling leg. The Padat added the ability to remove the centre column for use as a boom arm. Solid aluminium legs mean it isn’t as light as the Nissin, though: the Phottix Padat Carbon 200 tips the scale at 940 grams. It is still on sale for $180. 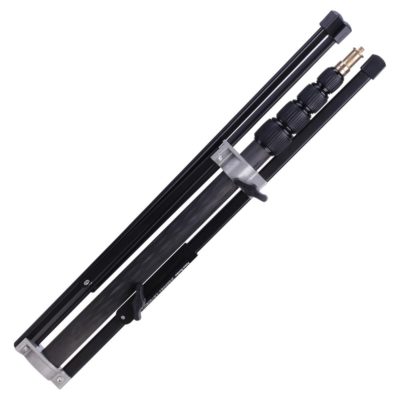 Since then the gripping race for ultralight grip has intensified. A few months later, Nissin introduced the world’s first stand with carbon fibre legs as well as risers, the LS-65C. Though heavier than the LS-50C stand, at 815 grams, a little bit less compact when folded (the legs are cylindrical rather than flat) and lacking a levelling leg, this all-carbon stand extends much taller, to a 270 cm maximum height and supports heavier loads. 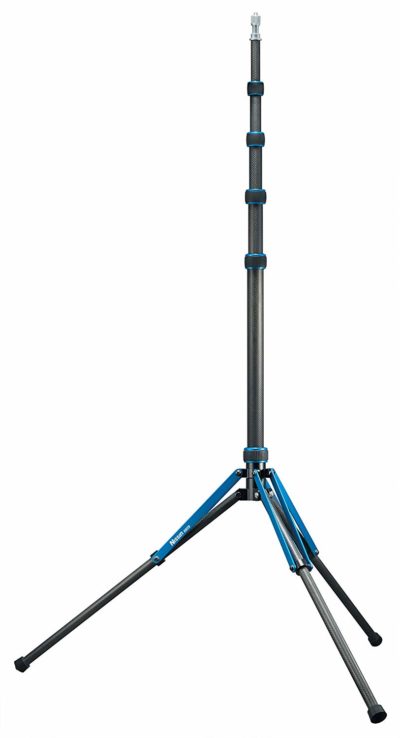 In 2019, Manfrotto announced the Carbon Nanopole MS0490C stand, which is, loosely speaking, just like the Phottix Padat Carbon but anodised red, about an inch shorter and a few grams lighter. Its maximum height is 197Â cm and it weighs 780Â grams. It’s also a little bit cheaper. 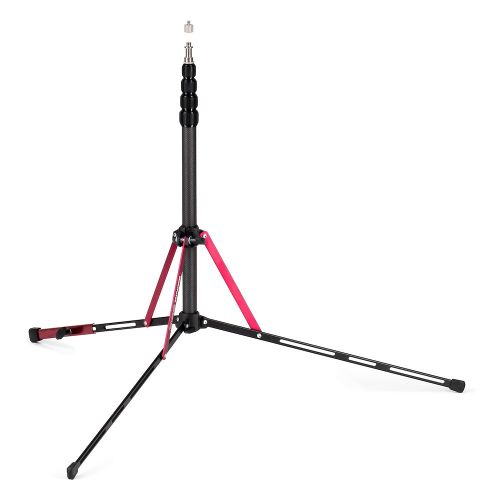 Not to be outdone in the ultralight stakes, Phottix followed up with the Padat Carbon 198, a weight weenie version of their earlier stand, dropping the removable centre column and levelling leg features, and with the aluminium legs drilled out to save grams. It is also two centimetres shorter, for some reason. These changes brought the weight down to 600 grams, which according to Phottix makes it “the worldâ€™s lightest light stand”: a title it wins by default, as the LS-50C, though lighter, has been discontinued. The 198 version is available now for Â£130 or about $140, cheaper than the 200 cm model. It may have lost its crown though: read on for more. 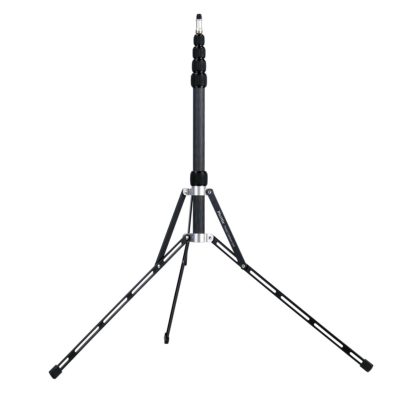 At some point later (we took our eye off the ball at this point) Nissin released another stand, the LS-55C, which it bills as a compromise between its two earlier products. Ultra light, and extending to 200 cm, but still featuring a levelling leg, it weighs in at 630 grams. Priced Â£139 ($170), the UK distributor modestly dubs it “one of the worldâ€™s lightest carbon fibre light stands”. 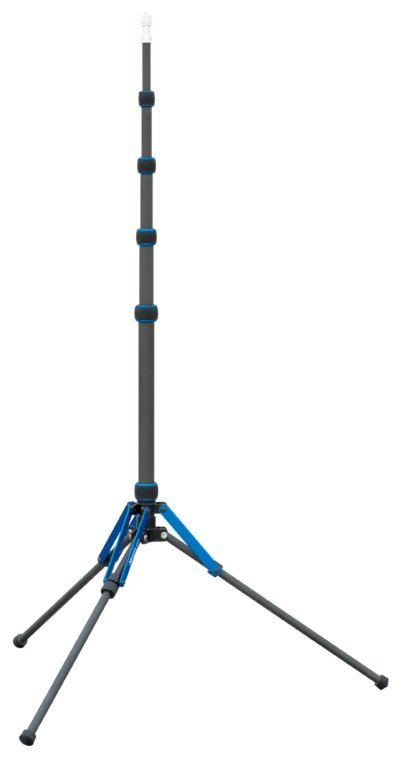 I thought that this was a pretty mild claim, given the size of the field in which it was competing. But a new challenger appears!

A new stand ostensibly from a company called Besnfoto has an interesting specification sheet: 188 cm tall (or 220 cm, depending who you ask) with a carbon fibre 5-section centre column that folds down to 50 cm long, drilled aluminium legs and a claimed weight of just 535 grams. The model name I have seen is C-5188, it came out in 2019 and it’s on sale for just under Â£50 ($60) on AliExpress or around $100 on Amazon. And there is even a hands-on review you can watch!

Other unbranded Chinese stands are out there with names like Selens and Fosoto, but most of them are 800â€“900 grams and look similar to the Padat Carbon 200. There are a few other ultralight ones but none with reviews that I have seen yet. Interestingly there is an all-aluminium version of the Besnfoto stand that’s lighter than many carbon ones. Are they made of cheese? Probably. 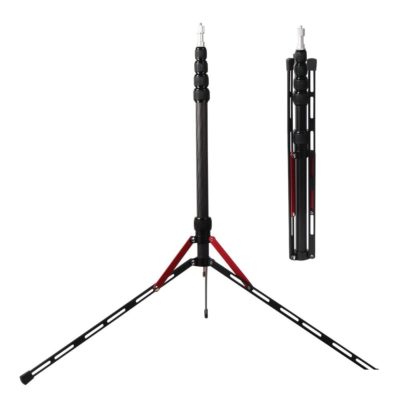 The last light stand I will mention here is the Fotopro Trident TR-01C, which is new this year. Fotopro are a fairly prolific and reputable Chinese tripod manufacturer. Available on AliExpress for around $60, the TR-01C weighs just under 900 grams (there is also a TR-01A made of aluminium that’s 100 grams more) and extends to 197cm tall. Like the later Nissin stands, Fotopro’s TR-01C has carbon legs as well as a removable carbon centre column and it features a levelling leg.

The Trident is really just a tripod with a massive centre column, and unlike most of the other options listed here, is held together with bolts rather than cheap rivets, so you can tighten it up or replace the fasteners yourself if things come loose over time. If long-term reparability is important to you, this could be the one you want. The following video will be the most dramatic promotion for a light stand you have ever seen.

Why are some of the all-carbon stands heavier than those with aluminium legs? Isn’t carbon lighter? A carbon fibre tube is lighter than an equivalent aluminium tube, but lightweight aluminium stands don’t have tubular legs; they are made of flat strips of metal, with cutouts to save weight, and can be affixed to the stand with simple rivets.

Why do I see different maximum height specifications for the same stand? Unlike folded length or weight, the maximum height of a stand depends on how wide you want the footprint to be. You could have the footprint really flat and stable, but lose height, or angle the legs near-vertically and have a taller but more precarious stand.

Why not just use a tripod? Camera tripods are not as tall as light stands, and have much wider footprints. They are designed for stability and vibration reduction for a steady shot. If your camera wobbles during an exposure, your photograph could be ruined. If your light wobbles, it probably doesn’t matter.

To conclude, here are your options to weigh up.

Are there any others? Let us know in the comments.