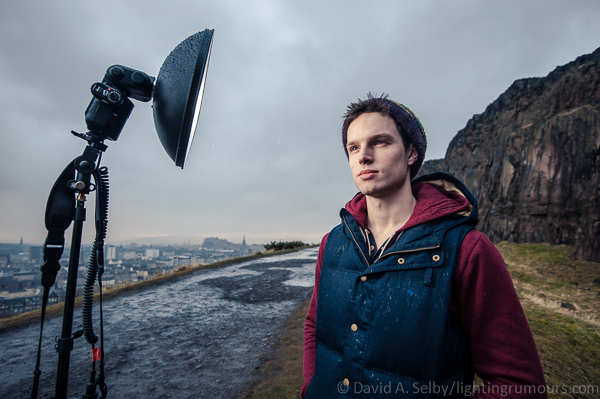 For a long time, there has been no clear readily-available alternative to the legacy Sunpak 120J bare-bulb flash, beside the Quantum Qflash series, which is priced out of reach for many photographers. The CheetahStandÂ Cheetah Light CL-180 aims to fill this gap in the market and update the format to the twenty-first century.

What’s the point? The Cheetah Light and its ilk are what speedlights would be like if they were actually designed for off-camera use. Conventional flashguns from Nikon and Canon aren’t very bright, are expensive/awkward to control remotely, don’t fill up softboxes very well and can’t attach accessories. The Cheetah Light takes reflectors natively, including large beauty dishes and umbrellas, and, combined with a Cheetah Speed Pro Bracket will fill every corner of a softbox thanks to its bare flash tube. 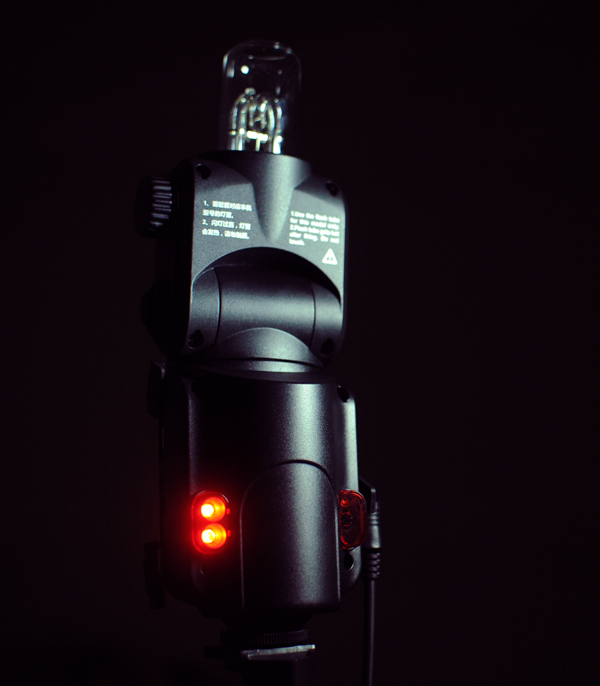 Our sample Cheetah Light set was generously provided by CheetahStand, straight from the Godox factory, so the branding and contents of my packaging will not be the same as yours. For a full guide of what is in the box, how it all fits together and how to use it, you can watch the following demonstration video by Edward Tang, founder of CheetahStand.

The Cheetah Light is solid. When I try out other flashguns they seem durable enough to withstand a few knocks, but the Cheetah Light is in a league of its own. It feels like, having survived an atomic blast, it could be used as a weapon to hunt small animals in the ensuing nuclear winter. Yes, it is made of plastic, but everything about the casing, the buttons and the mechanisms just inspires confidence in its longevity. 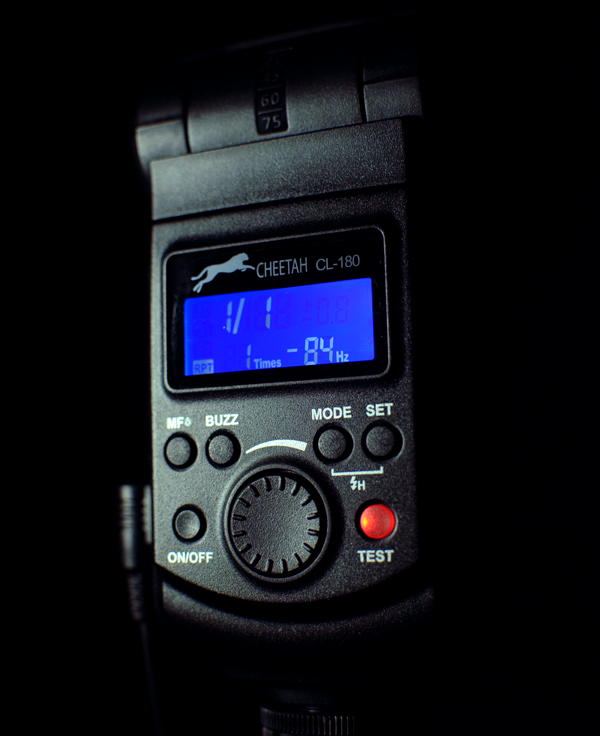 Controls-wise, there is not a lot to it. You have manual mode, two optical slave settings (enabling it to be triggered when it “sees” another flash going off) and a stroboscopic “RPT” mode. In the latter, which most owners will likely never use, you can customise the number and frequency of flashes for creative effect, for example shooting a dance sequence or water drops. There is also a red autofocus assist lamp that you can turn on and off, but no modelling lamp. Every setting is shown on a beautiful backlit liquid crystal display, which looks very slick.

The flash bulb does not lock into place â€” you just push it in and hope it stays there (it will). The light-shaping tools then fit around the bulb and are tightened into place using a locking wheel. At present, there is no protective cap for the Cheetah Light (though the flash bulb itself is protected by a glass cylinder) so when I take it out on location, I tend to remove the bulb and put it somewhere safe in my camera bag for transport, then re-attach it once I arrive. CheetahStand tell me they are working on this and may have a protective cap in future . 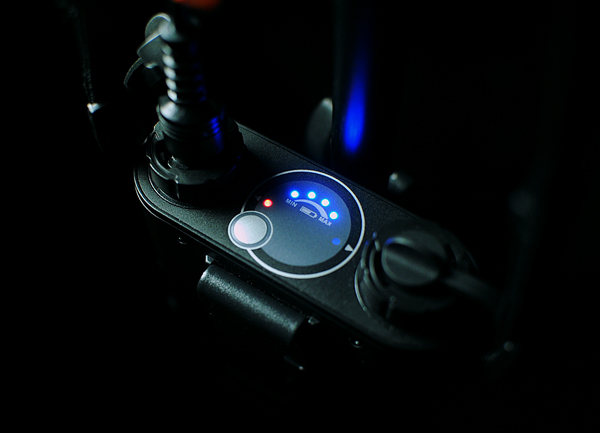 Because it is more powerful than a speedlight, you can’t just run the CL-180 on AA batteries. Instead, it runs from an external lithium-ion 4500mAh power pack called the CL4500 (or Godox Propac PB960 under OEM branding). Other battery packs will work with it too (e.g. Propac PB820), but the CL4500 is the one that you get in the kit. It has two output sockets, which have a mechanism for securing the power cables so they don’t disconnect accidentally during use. You can clip the pack to your belt or attach a quick-release shoulder strap (included).

The battery pack lastsÂ forever. Two months in a shipping container did nothing to the charge level and a number of intensive photoshoots have only brought the capacity down to three (out of four) LEDs. In the unlikely event that you do run out of juice during a shoot, the cartridge can be replaced without unplugging your lights. It slides into place with a very satisfying *click*.

As an off-camera flash

There are a lot of different accessories available for the Cheetah Light, including the standard reflector , an umbrella adapter, a 19-inch folding softbox-cum-beauty dish, two different kinds of snoots, honeycomb grids, filters and a 12-inch aluminium beauty dish. The only one you actually get in the basic kit is the standard reflector (which can be used both on and off camera), but the rest are very affordable. Click the images below to view larger versions. 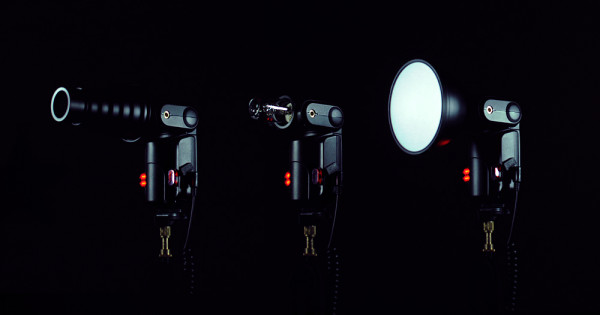 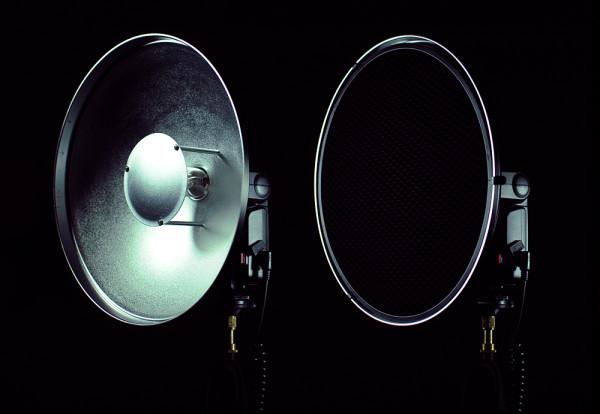 With five different ways to synchronise the CL-180 with your camera, the LumoPro Quad Sync seriesÂ might be getting a run for its money! As well as the hotshoe foot, the Cheetah Light has an optical slave cell, a 3.5mm sync port, a Prontor-Compur (PC) jack and a full-sized USB port. The last one is made to work with the CL-Tx Cheetah Light Remote set (Godox FT-16), which not only triggers the flashgun but also gives wireless manual control of the power level. The receiver draws its power from the Cheetah Light itself, so receiver batteries are one fewer thing to worry about. 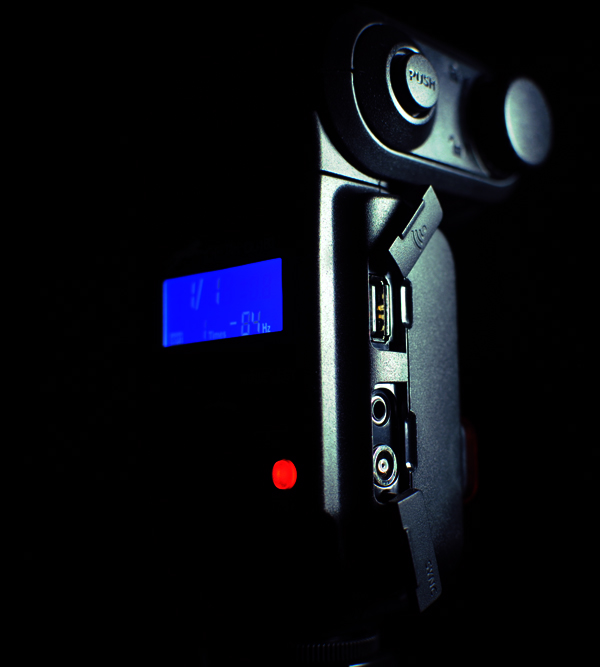 The CL-Tx runs on two AA batteries and sits upright in the camera hotshoe. I would have preferred a lower-profile trigger, but this works perfectly well. What’s more, you can use the CL-Tx handheld to adjust settings and have a different transmitter on your camera, so you can still use your preferred brand of radio triggers. 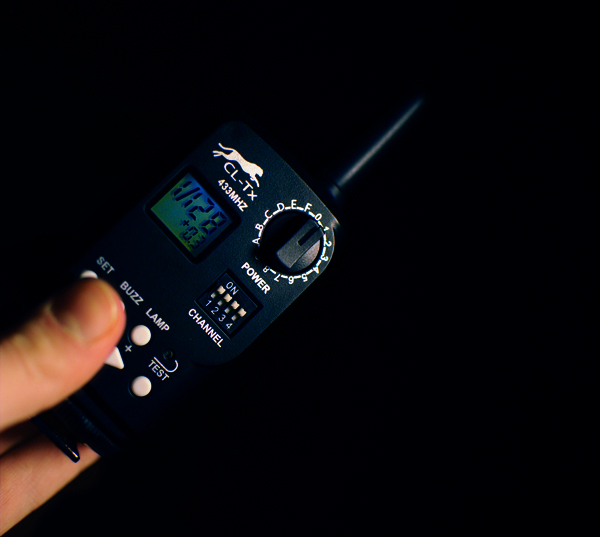 My friend Andrew wanted some portraits so I used the opportunity put the Cheetah Light CL-180 through its paces. The full set is so lightweight that we had no trouble scrambling up Edinburgh’s Salisbury Crags with the apparatus already set up on the light stands.

For the photographs, we decided to use the 12-inch beauty dish, which is a very nice bit of kit and not too heavy. At very close distances, the quality of light is beautifully soft and flattering for portraiture, while further away the dish throws lots of light forward and works well as a reflector for grittier photographs with harder shadows. Because the Cheetah Light head has a locking mechanism, it only tilts when you want it to, allowing the head to be positioned at any angle securely even with the relatively large beauty dish attached.

The CL-Tx never missed a beat and was very useful, allowing me to adjust the output in 1/3 stops as ambient conditions changed (we were shooting at sunset). For most shots in the sequence the CL-180’s power level was between 1/64 and 1/16, so we had plenty of light to play with, even through the beauty dish. However, we don’t have any sunshine to contend with here in Scotland, so while it is more than powerful enough for outdoor photography on this side of the pond, American photographers might want to crank it up a little higher to beat the ambient lighting.

My only criticism would be the battery pack, in that â€” depending on your light stand â€” there is no secure way to hang it from the stand, other than draping the strap over the knobs. The cord is not quite long enough to reach the ground when the CL-180 is positioned high up, so having the battery pack halfway up creates a high centre of gravity, which is cause for concern when you live somewhere as windy as Edinburgh.

As an on-camera flash

There are whole web sites and workshops dedicated to teaching people “off-camera good, on-camera bad” but if you are a photojournalist or events photographer then using the flashgun in the hotshoe can be unavoidable. Fortunately, the Cheetah Light is very well-suited to this kind of usage, maybe even more so than Nikon or Canon speedlights, which are not quite as bright.

No, you do not get through-the-lens (TTL) exposure control but it is quick and easy to adjust settings manually. On a professional-level camera such as the Nikon D700, the set-up does not feel especially top-heavy, but your experience may vary with smaller DSLRs and especially with compact system cameras. Carrying the Propac battery pack is a non-issue â€” just clip it to your belt and forget it’s there.

The primary accessory you’ll be using with the Cheetah Light on-camera is the standard reflector. For direct lighting (think paparazzi shots) the milky diffusion filter will help to soften up the light a bit, especially at close distances. When you need more raw power, particularly when bouncing the flash off the ceiling and walls, leave it off for the maximum output.

I went along to to cover an event taking place in a 500-seat lecture theatre. The University of Edinburgh’s students’ union was holding an emergency general meeting to vote on motions of no-confidence against its elected officers after they became embroiled in a media censorship scandal. The debate was quite heated but in the end the motions failed.

Despite the room’s vast size, the Cheetah Light was bright enough to bounce off the high ceiling at 1/2 power and still have enough photons left to illuminate the speakers and audience. It was even possible to use bounce flash to photograph, at 300mm, a spectator sitting the other side of the lecture theatre who had smuggled in popcorn.

After using it for several weeks now, it is clear that the CheetahStand Cheetah Light CL-180 is an excellent bit of kit. It is that much more versatile and powerful than a speedlight, but not nearly as big and bulky as a full-blown studio light. The controls are foolproof and the wireless remote control is a nice feature to have. With five different ways to trigger it, you should have no trouble incorporating it into an existing setup, but it would also be a great first light too.

The Cheetah Light is not for you if you absolutely must have TTL, nor if you need a modelling lamp. It is not as powerful as most mains-powered studio flashes and needs an extra adapter to be used with large softboxes. Conversely, if you only plan to use it on-camera then be aware that unlike a normal speedlight you need the battery pack with you at all times.Â Little niggles like hanging the CL4500 or protecting the flash tube are easy to work around, and the CL-180 is not fully weather-proof but then how many flashguns are? While the accessories are only suitable for bare-tube flashes like this one, they are relatively affordable.

The basic kit, at $670, is not an insubstantial sum of money to spend, however I would highly recommend it to any photographer needing a portable, versatile light source.

The Cheetah Light is manufactured in China by Godox, where it is called the Wistro AD180. There are no physical differences between the Witstro and the Cheetah Light besides the branding. If your Cheetah Light goes wrong then you can get customer service from CheetahStand, but if you have a Witstro-branded version then you will need to contact the Godox distributor where you bought it.

You can find the Godox Witstro on eBay and from certain other sellers including LinkDelight (HK) and Dynaphos (Bulgaria). If you know a seller not mentioned here, post details in the comments below.Â In the United Kingdom, Lencarta sells the FT-16 radio remotes and other Godox lights but it is not known whether they will carry the Witstro system.

Did I miss anything? Let me know any questions you have in the comments below.