In terms of knowledge and experience, I would consider myself an upper-intermediate-level photographer. I think I know a good share.

But I still go to beginner-based events and seminars on occasion. Not only do I like having the basics drilled into me. But once in a while, the instructor gives this little nugget of information, technique or process that just rocks. Something simple that makes lots of sense. Something I havenâ€™t read anywhere before. And I learned it in a beginner course.

I like the bag the Speedlite ZR45 comes in. I donâ€™t know if itâ€™s really better. Itâ€™s about 15% longer and doesnâ€™t have a slot to hold the hotshoe foot. Which I think is very odd considering the size of the bag. But I think the typical flash case is really stodgy-looking. So Iâ€™d give this new one a shot. I rarely need to carry the little stand with me any way. 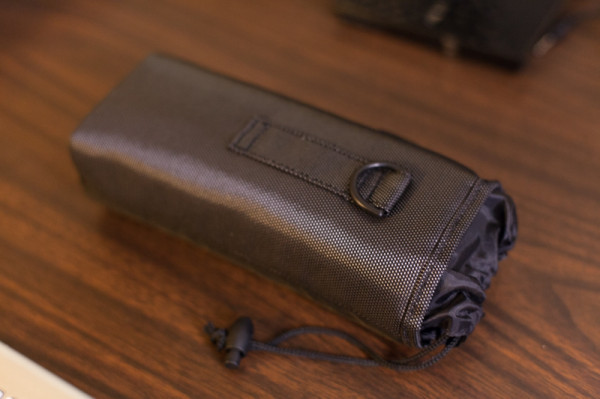 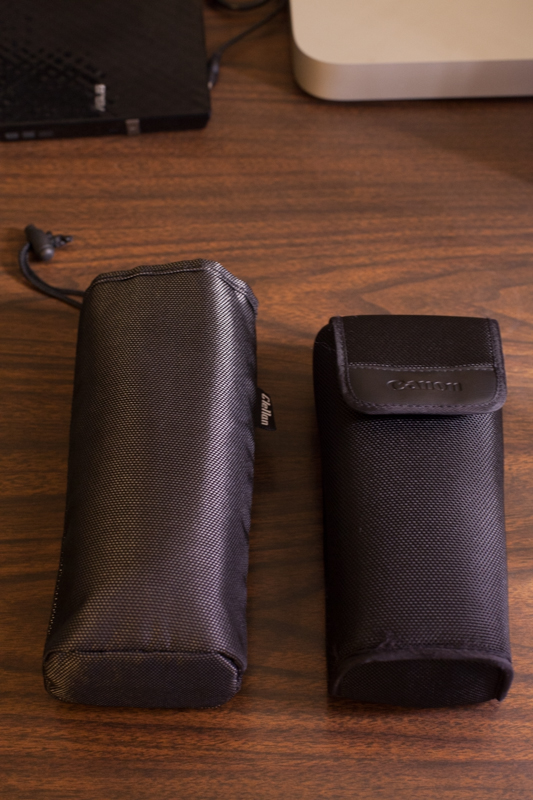 First impression: the unit feels good in the hands. It doesnâ€™t feel as sturdy as a Canon flash, but it certainly doesnâ€™t feel cheap. Iâ€™m comparing this flash to my Canon 580EX II. My Canon has taken a beating and keeps coming up. Itâ€™s the standard I hold other flashes to.

As you can tell from the image, itâ€™s strikingly similar to the Canon 580EX II. In fact, I canâ€™t tell a difference in dimensions. The modifiers I have all fit the flash head. Itâ€™s not a perfect fit but very close. The ZR45 flash head has straighter sides than the 580EX II. Also, the flash head doesnâ€™t lock. Itâ€™s loose enough that if you have a heavy enough attachment, like a Gary Fong Lightsphere, and are shifting the camera from landscape to portrait, the head is going to move. My 580EX II can barely handle the weight of the LightSphere. But with smaller modifiers, the ZR45 should be fine. 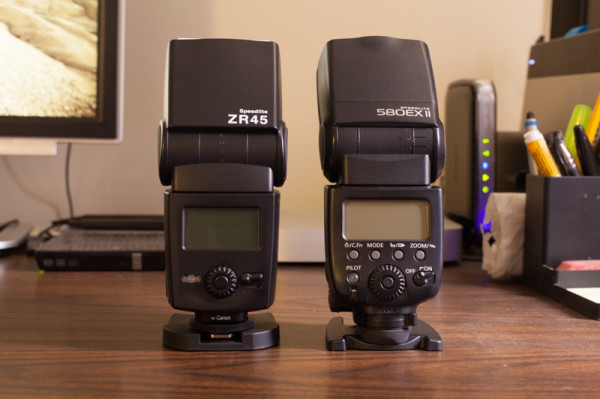 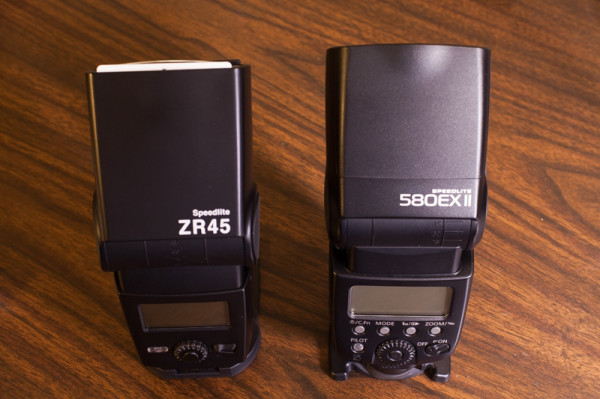 The head rotates horizontally 180 degrees and comes with the standard bounce card and plastic diffuser. The flash GN is rated at 45. Which, after some simple testing, shows. In terms of power itâ€™s more along the lines of the Canon 430EX II. Which is also a mighty fine flash. 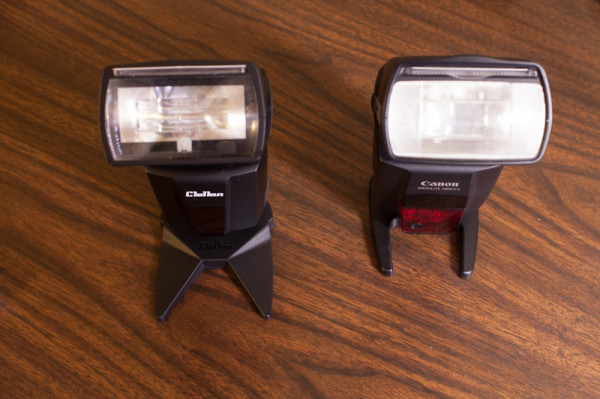 The flash hotshoe lock is a wheel, which you turn until it stops tightly. Feels reasonably solid. Itâ€™s typical of lesser flashes. But honestly, the premium Canon sliding hotshoe locks arenâ€™t as great as people say they are. Itâ€™s more sophisticated but I donâ€™t consider it vastly better. The plastic stand that comes with the unit is absolutely huge! Much larger than Canon units. 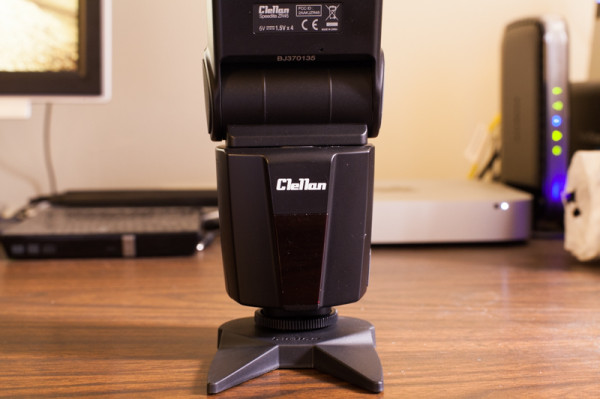 The battery compartment I thought was interesting. The slots to contain the standard AA batteries arenâ€™t deep enough to hold batteries in place well when being loaded up. A little nudge and the batteries will slip into different slots.

The manual is decent. But itâ€™s definitely written by someone for whom who English is not their primary language. I had to re-read certain passages for them to make sense. But anyone with a halfway decent grasp of the English language should do fine with the manual. But considering I believe this to be a beginner-level flash, it should have more pictures and descriptions on everything. There are no pictures or explanation of the two ports on the opposite side of the flash. Anywhere. Not even where the specifications are located in the manual. Nothing. One port is a PC Terminal and the other a 3.5mm jack.

Now, this is the part that reminded me of learning cool things in beginner photography coursesâ€¦

The user interface. What I really donâ€™t like about Canon flash interfaces is the unnecessary complexity of them. You gotta whip out the manual to set functions unless you got them memorized. And thatâ€™s totally 1980s. Been there and done that. No more.

The user interface on the Clellan is incredibly simple. Function codes are replaced by icons. Want to know what the icon does? Click on it and see what icons you see. You pretty much get walked through the process of setting a function. Thatâ€™s called good interface design. Thatâ€™s the kind of things you can do with a digital display. Like what the Canons have. There is absolutely no reason flash interfaces canâ€™t be this simple. However, there is a fly in the ointment.

The Function Dial. My gosh. After moving it forward and back a few times, I thought I was going to form blisters on my fingers. Mind you, Iâ€™m totally okay with manual labor. Digging ditches and stuff like that. No problem. So itâ€™s saying something when I tell you how tough-moving the Function Dial is.

The big surprise for me was the built in 2.4GHz radios built-in. And itâ€™s super-easy to setup. Just press the Function Dial button for a couple of seconds, select the radio icon and configure. Very simple. You have four channels you can control. But one issue is that you can only adjust flash remotely via radio by 1-stop increments. Those are big jumps. And almost makes wireless power control useless. Because if you need a 1/3 or Â½ power change, youâ€™ll have to physically move the light back and forth. And no, there are no USB ports to upgrade the firmware of the flash. You are really stuck with 1-stop increments. There is optical communication as well. But seriously, I didnâ€™t bother. I shoot in bright sunlight frequently and optical communication is useless to me. As well as ancient technology that shouldâ€™ve been phased out years ago.

The flash has E-TTL and HSS. Big pluses. Especially HSS in my opinion. The flash also has an AF light to help for focusing. For the location shooting I do, HSS is very handy. So perfect time to test the flashes in real world use. I did a small photoshoot to put the flash through some scenarios.

With a GN of 45, the flashes wonâ€™t be much use on a sunny, clear day. You can get some decent fill lighting. If your subject has their back to the sun, you can get some decent light on their face. But youâ€™re shooting close to full power with this flash. The ZR45 becomes much more useful when youâ€™re in the shade or indoors.

The image below with Justine was used with the sun behind her about 45 degrees up. It was a bright and sunny day. The position of the sun gave her a nice hair highlight. The flash is positioned 45 degrees above her, camera left. The dome was very close to her due to the bright sun. The flash shot at full power. With lots of help from the Photoflex Octodome-Small, the light is very gentle on her. The size of the octodome forms a natural and nice and subtle vignette from her chest to the top of her head.

The next image with Brooke was taken in an alley. This day was also a bright and sunny day in San Francisco. But the buildings protected us from direct sunlight and we were in the shade. This too was used with a Photoflex Octodome-small and positioned 45 degrees above her, camera left. I photographed this around 1/8 power. The light covered her whole body evenly.

I use a Phottix Odin system that I absolutely love. I use them with my Canon flashes to control power, focal length and groups/channels. I simply set my flashes to TTL + HSS and they work without a hitch. So that was my first test with the Clellans. When attached to the Odin receivers and set to TTL, they will fire and in HSS mode. But I canâ€™t control power output on the flash. So there must be a kink in the TTL programming in the ZR45. And why do I use Odins when the ZR45s have transceivers built-in? Well, because I want to fine-tune power. And maybe I donâ€™t want a flash on top of the camera to control the other flashes. And again, there is no USB to fix any TTL programming.

I think the little colored-plastic pieces that you can slide onto the flash head is clever. Integrated and professional looking. I hate wrapping pieces of plastic on the flash head. Again, another old-school practice that shouldâ€™ve been faded out years ago.

While I havenâ€™t seen any official pricing for these, Iâ€™ve read a price between $150 and $225. Iâ€™m not a student or beginner. Which I think is the market for these flashes. I think the flashes are fine for small, well-lit, indoor locations. The lack of 1/3 and Â½ power adjustments in wireless-radio mode donâ€™t make them ideal for more sophisticated applications. They are sturdy, have wireless features and are extremely simple to use. I hope other manufacturers learn from Clellan on how to develop great user-interfaces for their flashes. Some really nice features on the ZR45.