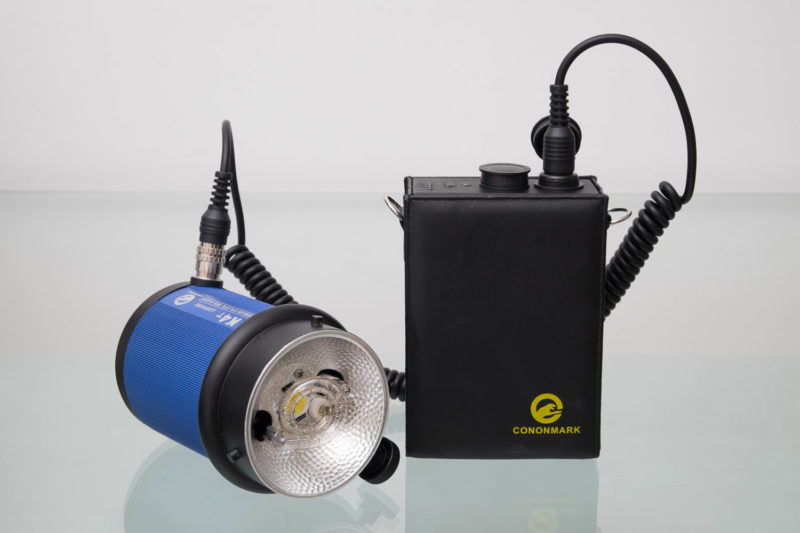 With the release of the Cononmark Leopard K4S, a monobloc with a functioning TTL mode was promised. As can be read in my review of the K4S this was not the case, but Cononmark quickly released a successor to the K4S. This new model, named the K4T, is supposed to fix all the flaws that were initially found in the K4S.

Besides the changed TTL function, the K4T is almost identical to the K4S. It is paired with a transmitter for Canon and Nikon which should give an operating range of 100M. No receiver has to be plugged in the strobe, since the receiver is integrated inside the strobe. Furthermore, it also features a LED modeling light and lithium-ion battery pack. This battery pack contains enough energy for 650 full power flashes. 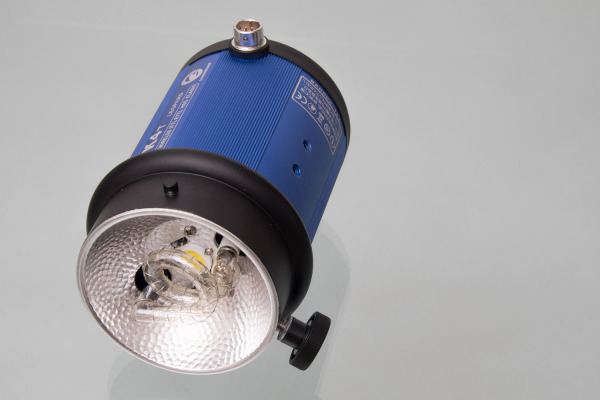 Therefore this review is focused on the TTL functions of the K4T. The build quality, manual power mode and Â other features were already documented and tested in my first review of the K4S. Besides the different letter (T instead of S) it is difficult to distinguish the two versions of the flash. During this review I will consider test the automatic exposure of the K4T extensively.

What is unique about the K4T compared to other flashes is that it features both a TTL and HSS mode simultaneously, which could be compared to shooting a regular speedlite with a TTL HSS trigger. The comparison ends here though, since the K4T has much more power, roughly 8 times the power of a regular speedlite. With the power of 400 Ws it means that even during daytime it is possible to overpower the sun using the HSS mode.

The kit arrived in a small suitcase in which the all the different components were packed. The suitcase itself is made out of metal, while it does seem sturdy I do not think you should check it in as luggage during flights. That said, I do like the little suitcase since it makes storing the equipment much nicer. Parts that were included in the kit were as follows: 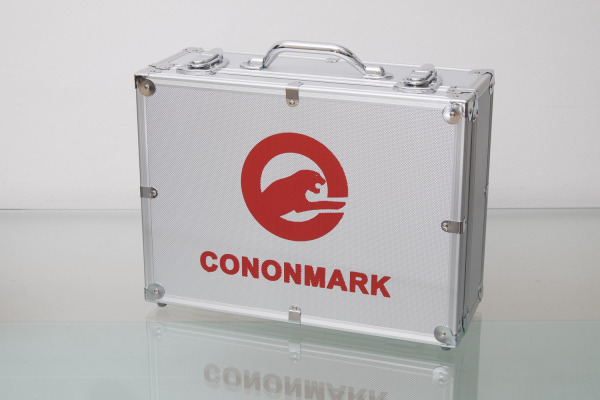 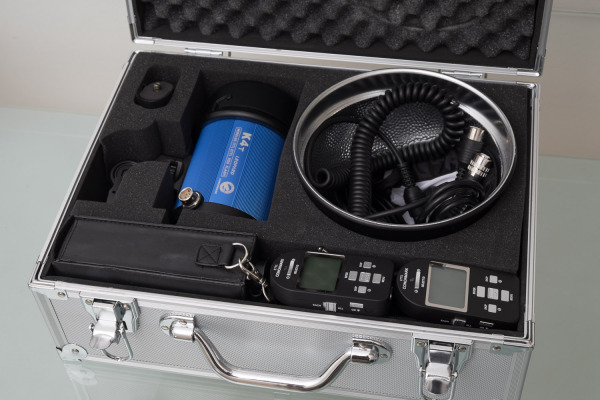 It is important to realize that this flash can be compared to combining eight TTL speedlites; only then will such flashesÂ be able to match the power of the K4T. As you can imagine, using eight speedlites at once would be rather impractical, not to mention all the triggers and batteries you would need. The Cononmark is a far more practical alternative.

As mentioned before the K4T is nearly identical to the K4S, so the build quality is the same. In the initial review of the K4S I already described how the monobloc itself is very well-built. The radio trigger bundled with the K4T seemsÂ to be slightly better built that the one that was included with the K4S, with better plastics and a nicer touch. During the various shoots I did with the K4T, I had no issues with the build quality of the kit; everything worked as it neededÂ to. 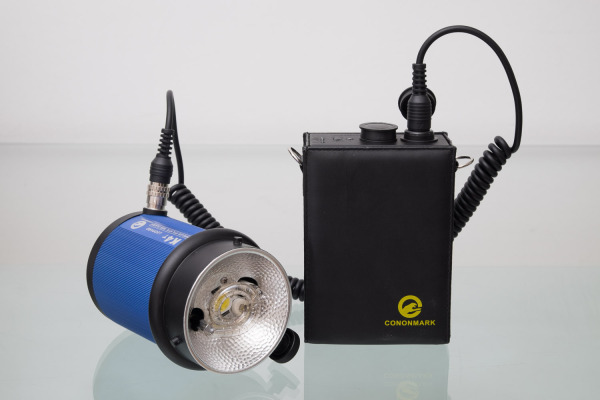 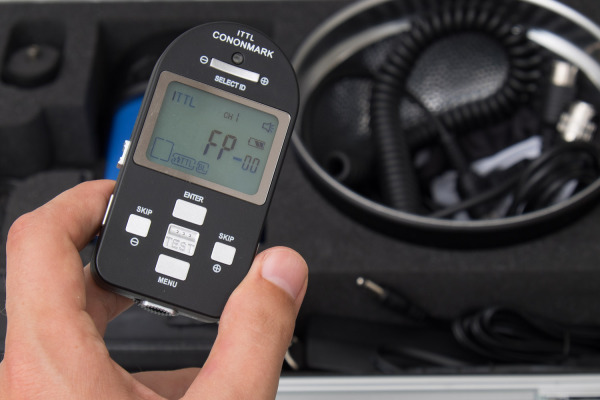 Since I will be testing the TTL function of the device I will be shooting exclusively in the automatic exposure mode. During the majority of the shoots I will be shooting in either aperture priority mode or in full manual mode. My goal is to expose the photo 1/3 to 2/3 stops under the ambient light and let the flash expose the subject by itself. I expect the exposure to be comparable to what I would get if I would use Nikonâ€™s CLS system. Exposure should be good irrespective of whether I am shooting a close-up portrait where the subject fills 80% of the frame or a setting where the subject only covers 10% of the frame.

The test parameters were:

Before we continue evaluating TTL performance and reliability, we focus on the operation of the device. After setting up the K4T and sliding the trigger into the hot shoe you can select the ITTL mode. HSS mode is automatically activated when the camera tells the trigger to do so.Â On the screen â€œFP -00â€ is indicated. If one would want to adjust the exposure compensation this would change to either â€œFP -10â€ or â€œFP +10â€. I do not understand the logic of the engineers at Cononmark. Honestly, I dislike the interface on the trigger. It feels stupid and I have no clue what the -10 setting exactly indicates. There is a reason why the industry has a standard and I would prefer to also adjust my flash settings with 1/3 stops. If the K4T manages to expose photos accurately then luckily I wonâ€™t be touching the trigger. 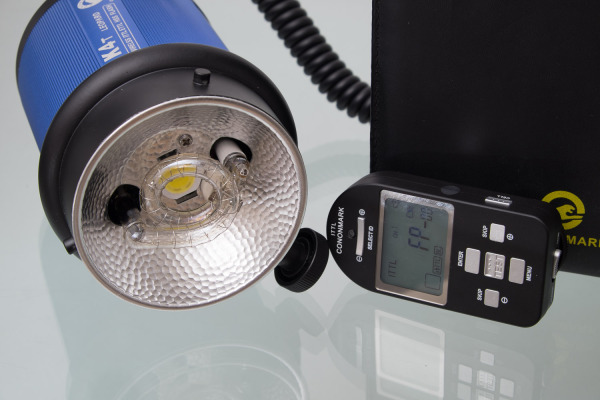 To be completely honest, I was rather skeptical when I started using the K4T. First gen TTL flashes always have problems. The comforting thought I had was that I could always resort to manual power mode, since it worked well with the K4S. But this was not my goal of testing, I wanted to know how it performs as TTL flash. I was really surprised when I took the first few shots with it.

While the K4S did disappoint severely, the K4T manages to live up to the expectations. I have used it in various light conditions and situations and it seems that the exposure is every time that as you would expect it to be from an TTL exposure. Consistency and accuracy seems to be great, I never encountered any problems with the flash severely under or over exposing. I can bore you with stories about how I used the flash but as they say, a picture says a thousand words. The following pictures are made with the Cononmark K4T flash in ITTL mode, using a Nikon D800 camera to shoot the pictures with.

You can see in the pictures that the TTL exposure is exactly whatÂ you would expect it to be. I am really happy with the performance the flash offers and with its convenience. It made me lazy and a lot of people will tell me that setting manual power exposure is still far better. While it is true what they say in terms of consistency, it is not in terms of flexibility. In a location where the light and subject changes all the timeÂ the practicality of the K4T cannot be beat.

Unfortunately I did notice one flaw in the TTL exposure of the K4T. When shooting with an aperture of f/2 or bigger (for example f/1.4), the exposure seems to be slightly too high compared to what I would have desired. In other words, with really big apertures the flash has a tendency to overexpose.

I am pleasantly surprised atÂ what Cononmark has managed to realize in the K4T. Not only they managed to create a flash which works fantastic as a manual power flash, but does so as well with TTL. Irrespective of you are shooting TTL, manual power, HSS or in bursts, the K4T manages to do a darn goodÂ job. In Europe the name Cononmark is relatively unknown, but it should not be. They managed to create a TTL lithium-ion monobloc that works rather well!

What disappoints me is the poor ergonomics of the trigger. They need to improve the build quality of the trigger and resolve the problem of slightly overexposing with fast apertures. When they do that the flash is nearly perfect. Anyway, for me these two aspects are certainly not deal breakers, but could have been improved. I would also like to have seen an additional receiver that works with my Nikon flashes in TTL so I can use the same trigger for my Nikon flashes.

There is one big disadvantage regarding the K4T. While it does offer serious performance, you are expected to pay serious money for it as well. On eBay the K4T was previously listed for $900 (though we can’t find that listing now) and for the same money you could buy a lot of other flashes. The combination of HSS, TTL and high power comes at a price. It is possible that this may come down when the product finds some distributors.

Although the price seems high, it does not take anyway away from the fact that Cononmark has managed to create a great TTL lithium-ion monobloc. It works well and they certainly managed to impress me. They have done something which is unique and I applaud them for their innovative spirit. Looking forward to what kind of productÂ Cononmark thinks ofÂ next!

For more information, read our review of the CononMk K4S or visit the manufacturer’s web site.