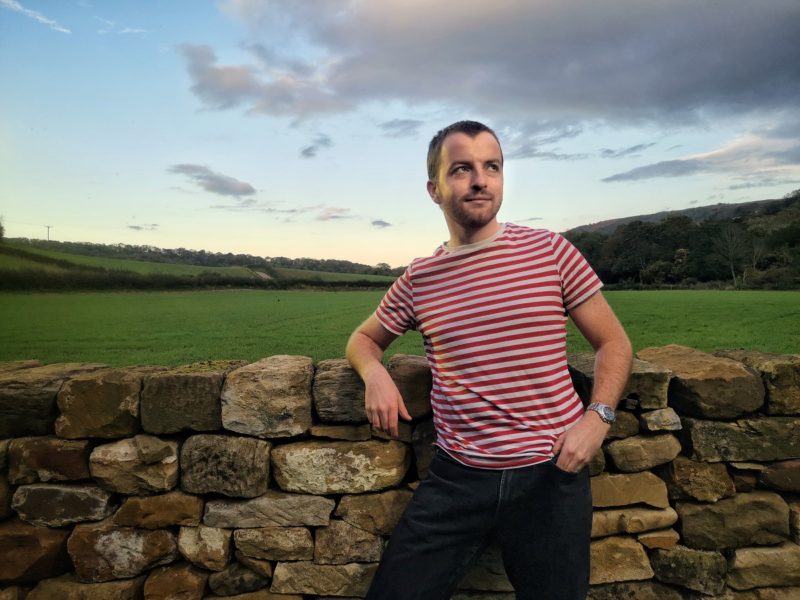 Our last smartphone photography session showed how off-camera flash allows you to shoot traditional two- and three-light studio portraits with a cameraphone, just as you might with a more conventional DSLR or mirrorless system camera.

Today we take the LED flashes on location, breaking free from the confines of a studio and using the Innovatronix CPFlash for a fake sunlight effect.

Can’t beat the sun? Move it!

As a battery-powered lamp, there is nothing tying you to shooting indoors with the CPFlash. Though you are never going to ‘beat the sun’ directly with such a small LED, in Yorkshire in autumn it’s a battle one can win by default. Here a wide angle lens is perhaps more of an asset than in the studio, and you can shoot environmental portraits or more abstract scenes.

Since the setups in the studio were rather controlled, here is what happens when you balance CPFlash with ambient lighting conditions, rather than simply overpowering them. I will show the same scene twice: first without flash, to give you an idea of the available light; then with the CPFlashes adding to the scene. Both shots were processed with identical parameters in Snapseed, for ease of comparison.

It is a pleasant evening in the valley. The sun has dipped behind a hill—behind the camera—resulting in a fairly cool, flat shot lit by soft light from the partly cloudy sky above.

If this shot were taken in the early morning, then (weather permitting) the sun would be appearing on the horizon behind me. But I couldn’t be bothered waking up that early, so I am going to use off-camera flash to fake it, instead.

At the same time, I’ll add a key light to the subject (me) to stand out a bit more from the background. The ‘face spotlight’ feature in your phone’s editing app might help brighten up your portraits, but it doesn’t change the shape of those deep eye shadows caused by the overhead light source.

Here is the final shot, with the same exposure settings and processing parameters, but with two CPFlashes illuminating the scene.

Look! I moved the sun! Now it looks like it’s over my shoulder, simulating a sunset from the opposite direction to the actual position of the sun. My face has a bit of extra light on it as well, though the effect is more subtle.

The back light is a CPFlash with a yellow filter, on a stand the other side of the wall, to the left. The key light (or fill light, depending on what you want to call it) is in front of the wall, just out of the frame to the right. It is a bare flash with no filter.

Both flashes were at full power. Below is a wider shot of the setup.

To trigger the flash and camera, I used the test button CPFlash’s hotshoe trigger (hidden in my pocket). To trigger the camera without the flash, I enabled the audio shutter control feature on my phone, so that it took a picture whenever I shouted ‘Cheese!’ loudly enough. Fortunately there was nobody else around to see this embarrassing display.

The way the CPFlash wireless remote works is that it sends an RF signal to the master flash, which then relays a Bluetooth signal to your phone (and an RF signal to any other flashes) to trip the shot. For a more detailed overview of how these flashes work, be sure to have a read of our previous article.

Originally, the rear yellow flash was set as master, as I was not sure if I was going to include the front light or not. This meant I had to hold the remote behind my back, so it had line of sight to the master flash, which would then pass the signal onto the camera and other flash. By changing the master flash to the front CPFlash instead, I could hide my hand in my pocket and not worry about the thick stone wall or my body blocking the signal.

To get the baseline camera settings, I first set my phone to expose for the sky, to avoid blowing out the highlights in the background. That gave me an exposure of 1/400 second and Iso-50 in the default camera app of the Honor View 20, which has a fixed aperture of f/1.8. Here is a screenshot, showing the CPFlash app overlay (as you can see from the live preview, at 1/320 sec the highlights were nearly clipping, so I increased the shutter speed).

Once that was set, it was then a matter of setting up the lights and moving them around to get the right lighting angle. Here the lights were farther away than they really needed to be. This is quite a wide composition, and could have fitted an extra couple of people in it.

Or, if my phone had a telephoto lens, I could have gone for a tighter shot and moved the lights closer, allowing me to reduce the exposure settings to darken the sky even more, for a more dramatic look.

Could I have taken a similar shot with some speedlights? Certainly, but not with my phone, I couldn’t.

Thanks to Innovatronix for providing demo units and for sponsoring this article. For more information on the CPFlash and other Innovatronix products, visit their web site.