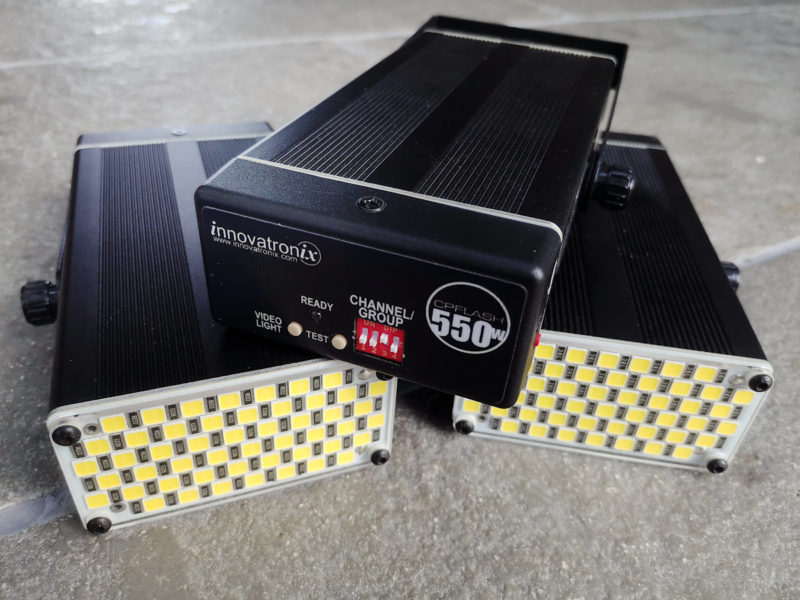 The Innovatronix CPFlash is designed to offer the best of continuous and flash lighting. It is bright like a speedlight for stills, but also works as a constant light for filmmaking. Uniquely, it works for smartphones as both a flash and a video lamp. And unlike big studio monolights or LED panels, it’s small and portable.

Innovatronix have sent me three CPFlashes to show how they work. The manufacturer is keen to emphasise that this is a light designed for smartphones. The ‘550-watt’ continuous power rating should not be confused with watt-second (joule) energy ratings on studio flashes; the output of the CPFlash in flash mode is comparable to a speedlight (around 60J) while offering the benefit of continuous modes for video lighting or use as a modelling lamp.

It works as a light for all cameras: phone, mirrorless or DSLR, thanks to a combination of Bluetooth connectivity, a handheld wireless remote and a shoe-mount flash trigger bundled with every unit.

Even if you don’t plan to take pictures with a cameraphone, you may still use your phone at every shoot. That’s because all adjustments of the CPFlash’s settings are done remotely, via the mobile app; the few physical buttons on the unit itself (and the small remote) are for changing wireless channel or quickly switching video modes.

This is not a bi-colour or RGB lamp; the output is daylight balanced, but included are a set of neat magnetic colour filters that snap onto the front.

Your phone connects with a ‘master’ CPFlash via Bluetooth, then settings are relayed from there to any other remote units via local RF signals. (The master/commander is any unit with a channel that starts with a ‘1’, such as 1000, 1001 and so on.)

The CPFlash app provides an intuitive overview of your current setup. From the main screen, you can change the flash or continuous power output, turn constant lamps on and off, switch between video lighting special effects modes (simulating scenes like a flickering lamp, TV screen or bonfire) or adjust the flash duration. You can stop individual lights from contributing to your exposure by setting their channel to ‘inactive’.

Most of this is similar to many other app-controlled video lights on the market. The unique selling point of the CPFlash, however, is the flash synchronisation with smartphone cameras. In flash mode, the LEDs are overdriven for a user-customisable duration (from 80 to 500ms, i.e. 1/13 to 1/2 second). The idea here is not to freeze action, but to provide an efficient burst of light that is open for as long as your camera shutter.

You can use whichever camera app you like, because the way CPFlash works is by drawing a floating shutter button on the screen, over other apps. You set up the camera settings the way you like (ideally in the ‘pro’ or manual mode, to minimise shutter lag and get a good flash exposure) and then hit the CPFlash camera button to simultaneously fire the flash and take a photograph.

(If you prefer, the bundled flash trigger will do the same taskâ€”firing flashes and tripping your phone’s camera shutterâ€”on hitting the test button.)

Like a conventional speedlight, best results are obtained in manual exposure mode. Firstly this to avoid over-exposure: your phone’s meter doesn’t know about the bright flash that will light your scene, even with the modelling lamp enabled (and there is no wireless TTL control here). The second reason is because shutter lag varies from phone to phone. If your app pauses to refocus, or take a meter reading, the camera and the flash may go off at different times. User-adjustable flash duration helps here: the longer the flash, the better chance it will cover the exposure (at the cost of drawing more power).

Smartphones have various limitations, not least of them lens choice, so you may prefer to use a system camera.

To link your camera to the CPFlash, use the included hotshoe radio trigger. It is a simple single-pin trigger, so any adjustments to brightness or flash duration are still done via the mobile app.

Compared to an ordinary speedlight, the CPFlash has a much brighter modelling lamp, so you can get a preview of your lighting without having to take lots of test shots. And if you make both films and stills, you can do it all with the same set of lights.

With a set of CPFlashes kindly provided by Innovatronix, I (David) decided to try to experiment with using the CPFlash for portrait photography. Let’s start with a traditional three-light setup: main, fill and rim.

How can we position the light? The integrated tilt mechanism acts as a tabletop stand or as a means of attaching the CPFlash directly to a light stand. For use with an umbrella, you can screw a swivel adapter into the tripod socket on the base.

As it’s around the same size as a speedlight or AD200-style pocket flash, the CPFlash also fits perfectly into a Godox S-type speedlight bracket. This means you can easily attach softboxes and other lighting accessories. Here I use a Pixapro collapsible beauty dish with a honeycomb grid. Both the diffuser panel and the grid will suck up light, so this sort of modifier can push a small light to its limits of power. 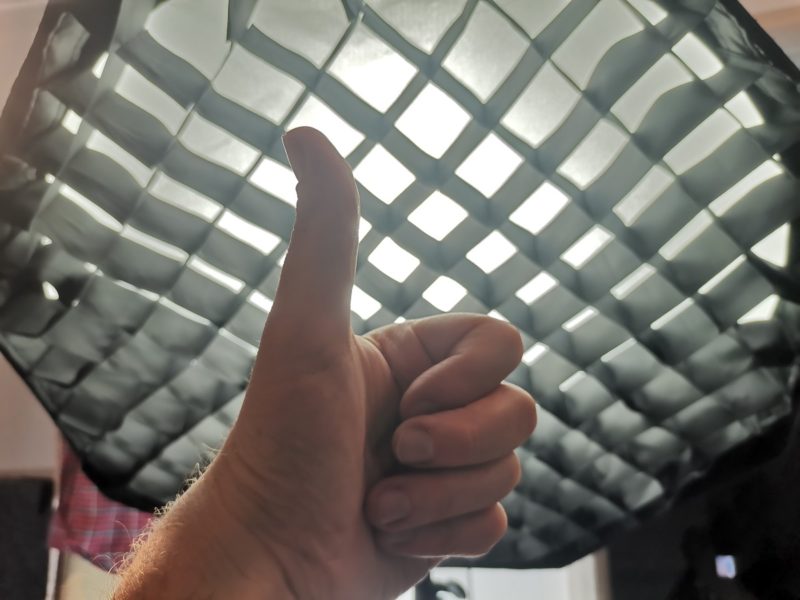 Though it doesn’t have a fresnel or barndoors, it is easy enough to control the spread of light from the LEDs, in the same way you might with a speedlight. In my case I used a DIY gridspot to stop my rim light flaring into the camera lens or spilling onto the backdrop. (As a general rule of thumb, if an accessory fits a large-ish speedlight head then it’ll fit the CPFlash as well.) My fill light is a CPFlash, bare, just bouncing off a white wall. Typically I would use a reflector or an umbrella for this, but space was limited as I was literally shooting in a wardrobe. 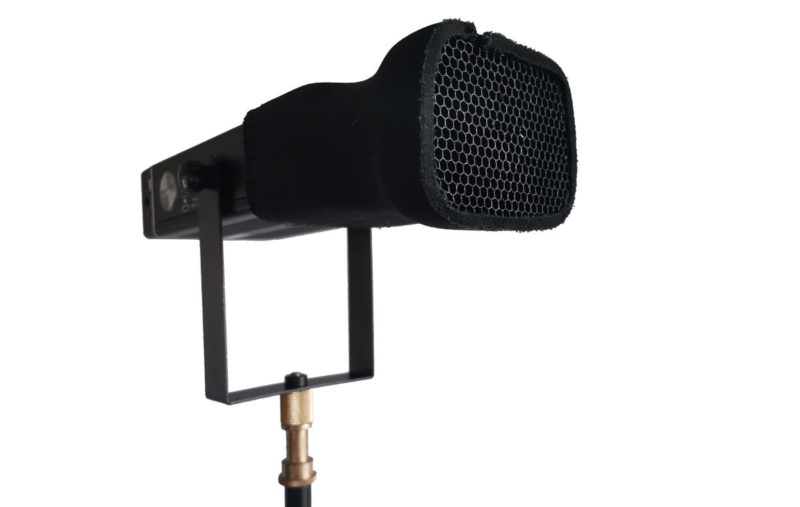 With the main light set to full power and the fill and rim lights each set to half a power, here is a traditional self-portrait, with a twist: it’s shot on my Honor View 20 smartphone, lit with LED flashes. For these photos the light appears to have a bit of a green colour cast occasionally seen from LEDs (here my phone is set to daylight white balance) though this may be specific to my camera or the light modifier used. This can be controlled for with a manual colour temperature setting, or fixed in post-processing (especially if you have a phone that can capture raw image files).

Above is the ‘straight out of camera’ Honor View 20 shot at aperture f/1.8, shutter speed, Iso-50, with the CPFlash flash duration set to its default of 250 milliseconds (1/4 second). Below is the same image after some post-processing. I used the desktop photo editor Gimp for this, but I often also use the mobile app Snapseed, which offers a similar range of advanced adjustments.

And here’s the same frame without the CPFlashes firing, to show how much ambient light was contributing to the exposure.

Unlike some cameraphones, mine only has one lens and it is a wide angle, so the field of view is quite large. With my pop-up backdrop, I can choose to shoot in the highest resolution and do a zealous crop, or keep the whole frame for a bit of an context and perhaps more of an editorial look. Phones equipped with a ‘portrait’ lens can go for a more classic perspective. Here is another composition, captured with a smartphone, then edited in Snapseed. This is the sort of perspective you get when the phone is at arm’s length, rather than out of reach on a tripod.

For comparison, here is the exact same setup, shot with my Panasonic Lumix GX8 and a telephoto lens (at an 80mm focal length). The simple shoe-mount flash trigger Innovatronix bundled with the CPFlash makes it easy to shoot exactly the same setup with a smartphone as with an interchangeable-lens camera like this, or a DSLR. As you can clearly see, the long lens let me position the camera much further away and zoom in, which gives a much narrower field of view.

This longer focal length (or, technically speaking, the more distant viewpoint) is probably a bit more flattering as it doesn’t make my nose look quite as big. On the other hand, it can be a bit of an ordeal sending the file from my camera to my phone if I want to share it quickly, and a plain backdrop isn’t always the look you want. Other phones have longer lenses, so you can get a similar composition to the Lumix shot here.

In any case, both devicesâ€”phone and mirrorless cameraâ€”were able to use exactly the same lighting setup, thanks to the Innovatronix CPFlash’s flash synchronisation capabilities. For a traditional portrait like this, many people will prefer the system camera option, and the CPFlash does not limit you to one or the other.

Innovatronix includes a set of magnetic colour filters with each CPFlash, for creative effects. Let’s put them to use. A subtle approach might be to gel just a rear light for a bit of a highlight or accent. Or we can make something that really pops.

Not a traditional portrait setup, but a dramatic effect. Both lights have colour filters on them for a strong contrast between red and green. We aren’t bothered about colour casts this time! Here is a look behind the scenes.

Though it wasn’t shot in a pitch black room, the exposure settings ensured the contribution from ambient light was minimal. Here is the same shot without triggering the flashes.

This is fast and easy to do, and unlike a continuous light there is not really any risk of motion blur. The range of filters in the box means you can mix and match to your heart’s content. If those aren’t enough, you can add your own.

Here we showed just a couple of things that are made possible with an LED smartphone flash. Could you have got the same images with a ‘proper camera’? Certainly! But until recently it would have been very challenging or impossible to get the same results with a phone. For those who want to take advantage of setting up lights, shooting, editing and sharing all on one device, then this could be the future. Keep an eye out for more LED flash demos.

Thanks to Innovatronix for sending us free demo units, and for sponsoring this article. For more information on the CPFlash and other Innovatronix products, visit their web site.