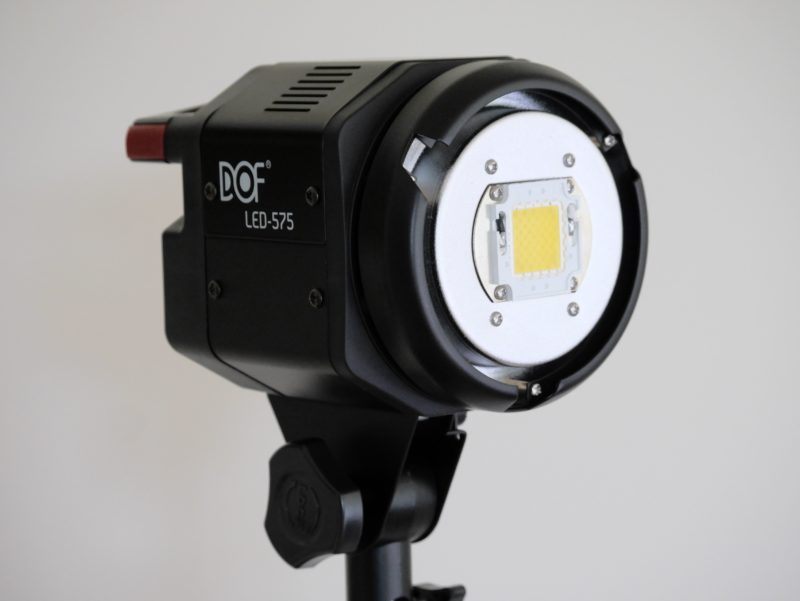 I was recently approached by Gearbest.com, an online electronics retailer, to see if I would be interested in reviewing some of their products. The store isn’t one I’d heard of before, but seems to be modelled in the style of DealExtreme â€” cheap international mail-order â€”Â with a particular emphasis on gadgets.

Their photography accessories section isn’t exactly loaded with studio gear but Gearbest does offer a few off-brand flash units, small video lights and other bits and bobs. Nothing too exciting, but one item that stood out is the DOF LED575, a Bowens-mount LED studio light. Lots of companies do this kind of photography-friendly continuous lamps now, but at $127 (Â£83) it is half the price of the Jinbei EF-100 or Godox’s equivalent, the SL-100W.

Out of the box, the first thing that I noticed about the DOF LED575 was how small it is compared to other monolight-style LED lamps. This unit measures just 16.5cm from front to rear sans reflector, which is pretty compact compared to the longer Jinbei and Godox S-fit LEDs: both 34cm in length. 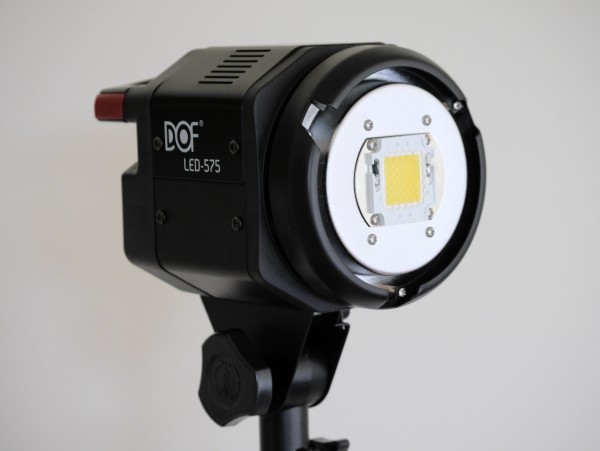 The second thing I noticed was that the plastic cover on the power adjustment dial had fallen off. I had to fix it with super glue.

In addition to that, the reflector was bent in transit so now its rim traces a shape slightly more amoebic than circular. Not a huge problem but hardly ideal. My sample was shipped via DHL all the way from China to England; maybe I was unlucky or maybe more packing materials would have helped.

Encased in sturdy aluminium alloy, the DOF LED575 by no means a flimsy piece of kit but hardly a masterpiece of fine craftsmanship either. The design is mostly utilitarian and the seams between panels are not perfectly neat, though there are no sharp edges to worry about and it seems like it could take its fair share of abuse. The back panel seems to comprise mostly off-the-shelf components, though the red grab handle adds a touch of style and is surprisingly ergonomic. The tilt bracket is also unusually strong and nice to use for a product at this price point. 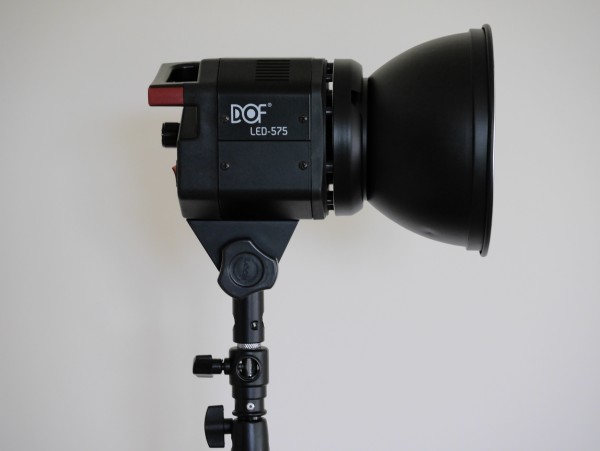 The aforementioned analogue power dial seems oversized, making it hard to read the scaleÂ at any angle other than straight-on, but the dial does not properly align with the maximum and minimum markers anyway (even with careful gluing), so treat this as a very rough power readout: I would rely on a light meter for more precise adjustments.

The business end of the lamp hosts the 50-watt LED and the accessory mount. Unlike other lamps of this type, the diodes are not surrounded by a visible heatsink and the light source is instead screwed directly onto the front panel (though there is a hidden heatsink behind it). One possible consequence of this is that the LED575 must rely a bit more on the built-in fan to stay cool.

At this price point, the manufacturer had neither the budget for neither a silent cooling fan nor an intelligent temperature-detection system. As a result, the fan is noisy and runs at all times, at a constant speed, whether you have just switched the lamp on at the minimum power setting or have been running it for a while at maximum output. I don’t have a decibel meter to hand but it seems loud enough to disrupt video productions relying on live audio recording.

Another annoyance is the accessory mount, which rattles, both with the included reflector and my own Bowens S-type accessories. The mounting lock seems secure enough to stop your light modifiers falling out but there is too much clearance on the other two lugs, thereby allowing the stock reflector to rock backwards and forwards. This can be irritating when setting up, but does not appear to cause any problems once everything is in position. More on this later.

Despite the aforementioned niggles, the DOF LED575 cannot be criticised for complexity. It is very easy to use. As with most other single-colour LED lamps, there is not a lot to learn in order to use this light. Switch it on, twirl the knob the get the desired output, and away you go. There aren’t any numbers on the adjustment dial, but somebody with a light meter and a lot of patience might be inclined to add in their own labels for “1/2”, “1/4”, “1/8” and so on. As it is a continuous lamp, you can verify brightness using the meter built into your camera, or even opt for Aperture-Priory or Program mode to let the camera decide exposure settings for you. 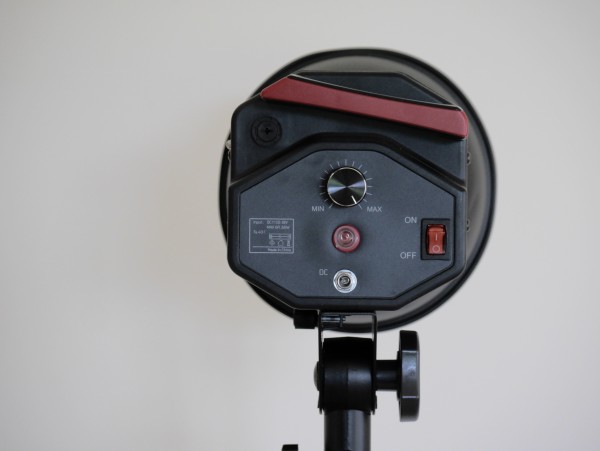 With an LED rated at 50 watts, the DOF draws half the power of most other monolight-shaped LED lamps, allowing it to be cheaper, more compact and lightweight whileÂ producing less heat. It also means, of course, that we can expect to get half the light output â€” maybe less or more depending on the efficiency of the components. 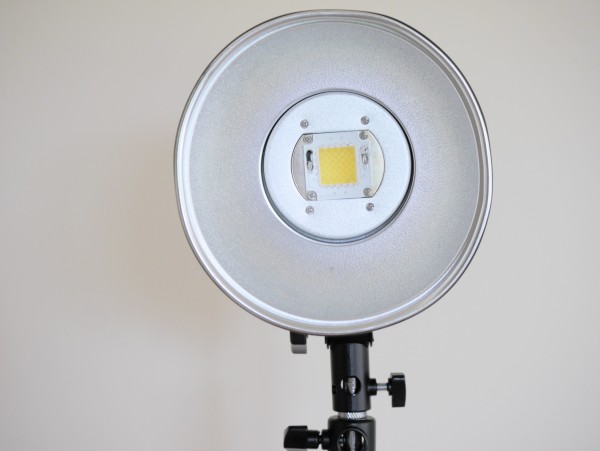 The manufacturer specifies a colour rendering index of “80+”, which is pretty modest and probably won’t make it to the top of the list of any discerning commercial photographers shooting archival images. But those people wouldÂ be spend more than Â£85Â onÂ a studio light.Â The output is very acceptable for my own usage this weekÂ (a bit of eBay product photography in a light tent) and â€” crucially â€” appears to be well colour-balanced with daylight, allowing me to mix it with window light freely without worrying about colour casts.

TheÂ LED575’s case barely exceeds room temperature, even after 30 minutes running at full power. It was only slightly warm to the touch around the accessory mount, suggesting the cooling system is doing its job.

Full power, as mentioned, provides enough light for a decent exposure with a standard reflector, but once you add a light modifier, such as a light tent, umbrella or softbox, and get a bit more working distance (2 metres or more) I find there is aÂ less light to work with than I would ideally like.

While I was shooting products, the LED575 wasÂ pointed through a light tentÂ andÂ helped by someÂ ambient window light.Â To achieve a usableÂ shutter speed (1/80 second; ignoring modernÂ image stabilisation for a moment) I had to shoot at Iso-800 and f/5.6, which offers ratherÂ less depth ofÂ field and more noise than IÂ would ideally like. Of course, this is a continuous lamp so I couldÂ lock down my camera for f/11, Iso-200,Â 1/5 second, butÂ that means more time and gear (a tripod)Â to set up.

A big appeal of a light with a Bowens S-fit accessory mount like this one is the ability to fit a vast array of different light-shaping tools to the front. I mounted one of my biggest and heaviestÂ modifiers â€”Â a 120cm octagonal softbox â€” and the DOF LED575, despite being only a cheap light, handles it with ease. The tilt bracket requires the bare minimum of tightening (hardly more than you would need for the naked lamp head) and the LED575 just happily holds it like it weighs nothing. The bayonet mount doesn’t rattleÂ with heavy modifiers and I had no trouble fitting and removing my softboxes. 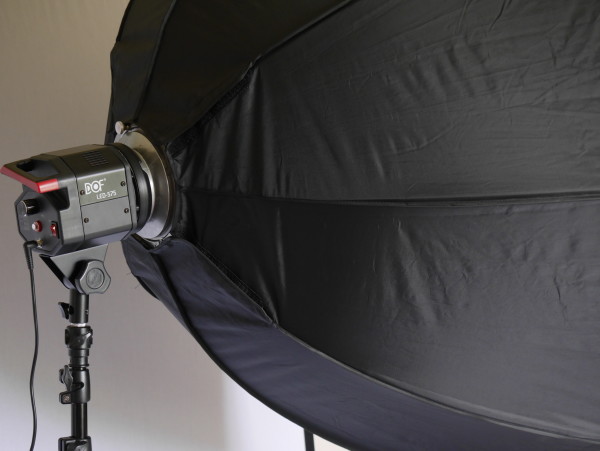 Bam. Large light source. Much simpler than my bedsheet-hanging kludge with the recently-reviewed Micansu 60W LED panel, which had no accessory mount to speak of. 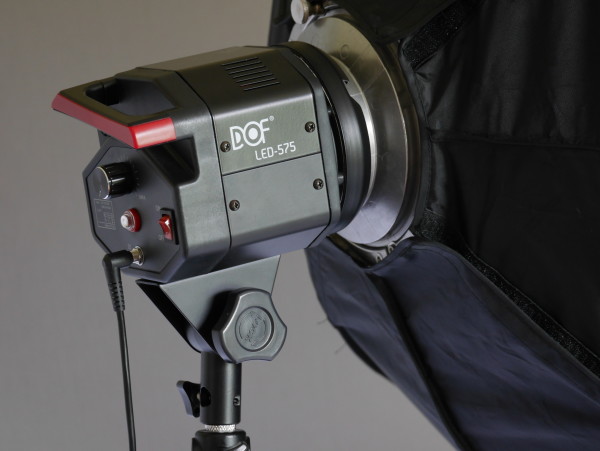 The 60Â° beam angle of the LED array is a good deal narrower than a true “bare bulb” (which would theoretically have >180Â° coverage) but this effect seems to disappear in a double-diffused softbox. I can’t see a significant central hot spot on the front panel, even on this cheap eBayÂ softbox. Your mileage might vary, however, if you are using the LED575 bare or with only singly-diffused softboxes. 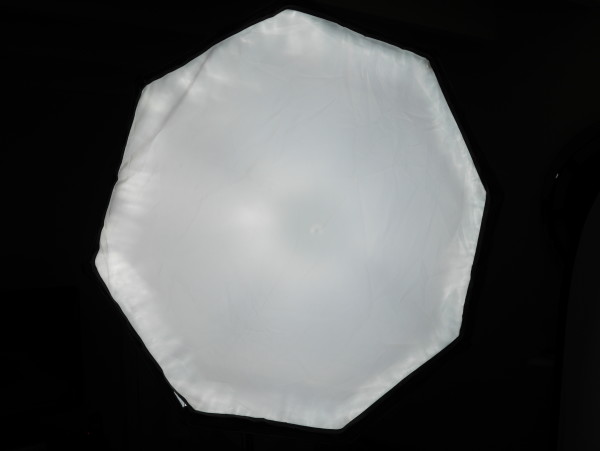 InÂ my large softbox, the LED575 produces a pleasant, soft light.Â The following image is straight out of camera, with the LED575 set to full power.

Once again notice that the light levelÂ does not leave much room for manoeuvre in your exposure settings: while f/2.8 is a perfectly reasonable aperture for this portrait, if I wanted a deeper field of focus then I would have to compromise shutter speed (risking camera shake or motion blur) or Iso sensitivityÂ (increasing noise and possibly reducing dynamic range).

The DOF LED575 is a very affordable LED light with a good deal of charm.Â Unlike most other LEDs, this oneÂ has beenÂ marketed primarily for stills photography. Its noisy cooling fan may ward off videographers, but the Bowens S-type accessory mount provides access to hundreds of different light shaping tools. The compact size means you could take it on location without difficulty and it has just enough output to provide nice results.

Mechanically, theÂ design is sturdy and efficient but theÂ outputÂ controls are imprecise, the packaging was notÂ protective enough,Â smallÂ accessories rattle in the mountÂ and there are no bonus features like remote control. After my experience with this light, IÂ would say that 50 watts is the absolute minimum I would look for in an LED. While one can get serviceable images out of this lamp at full power, compromises must be made ifÂ more diffusion, working distance or depth of field are required.

At Â£83, the LED575 might be a good starter lamp for a student photographer, an amateurÂ on a budget, or as an extra lamp for shooters already armed withÂ some LED heads. The small size â€” about half that of most 100W heads â€” could also come into its own in some location kits. If you have a bit more money to spend or are looking for a main light source for professional work, however,Â I would skip this one and go for a more powerfulÂ 100W head.

The DOF LED575 is available now from Gearbest.com.