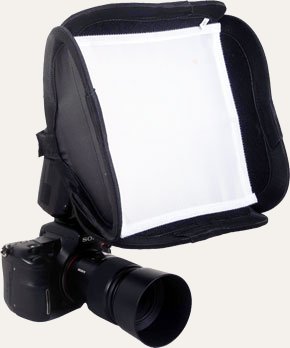 IShoot/Photoloving, a group of Chinese eBay sellers,Â have released aÂ double-fold reflective lighting umbrella. Made of polyester, it opens up to 33″ (84cm) and folds down to 40cm long. It costs around US$35 shipped from Shenzhen, China.

Another ultra-portable diffuser is theÂ miniature 23cm (9″) folding softbox, attaching directly to the head of your hotshoe flash with Velcro. No brackets are required, allowing you to mount it to a speedlight even while it’s on your camera. There are two diffusion panels, both of which are removable. A single softbox is priced at US$29.99 on eBay.

The iShoot High Density 60″ (153cm) Umbrella is a paradox. While the shallow parabolic umbrellas sold in the West are made in China, those sold in China are apparently made in Europe! The 16 rib umbrellas come in white (shoot-through) and silver (reflective) models.