Ledixis, a French company, has launched a new modular bi-colour LED lighting system called Exalux Briks. The “ultra mobile” lights are meantÂ to be fairly high-end, claimingÂ consistent output and designed for film-makers, broadcasters and photographers.Â LedixisÂ were kind enough to lend us one of their Exalux Briks “LiteinBox” kits to review. The system will be distributed in Britain by UKphotodistro. 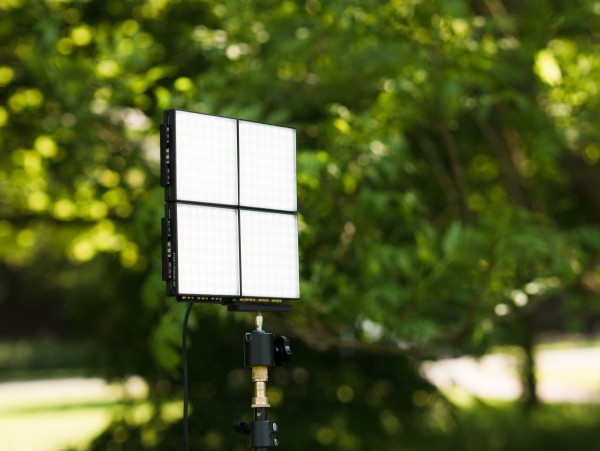 The light is made up of interconnecting panels, or Briks Modules (128 LEDs each), which share a single power source and match each other’s output. You can add Briks to any of the four sides and they are held togetherÂ by screw-on brackets. It is usually enough to tighten the bolts with your fingers but you can use a Phillips-head screwdriver for extra security. The entire system feels very sturdy â€” it is almost entirely made of metal â€” though there are rather a lot of little screws so you have to be careful that you align everything correctly and don’t cross-thread any connections. The last time I fastenedÂ so many screws I was building a desk from Ikea! This will not be a truly run-and-gun light unless you go on assignment with it already fully assembled.

There is no cooling fan; instead the metal structure of the Briks effectively acts as a heat sink. When running the light at full power for several minutes the unit can get quite warm, but not too hot to touch. A two-Brik unit weighs about 700 grams, which is easily light enough to mount on a DSLR, while a four-panel array should still be fine on a large video camera. In theory you can connect up to 250 Briks per controller, with a maximum power of 120 watts.

The Controller, which mounts on the back of one of your Briks, is where you add a power source and set the output. The battery holder takes a Canon LP-E6 or a DC input from a mains adapter. There are 8 LEDs each for power and colour, with 7 power levels (plus ‘off’) and 8 colour temperatures from 3200K (tungsten) to 5600K (daylight). You make adjustments using the little membrane-style buttons and you can save one preset (which is handy because the controller doesn’t remember your last-used settings when you power it up).

Controls are easy to master but the buttons can be a bit finicky over registering presses; sometimes a single tap is too quick, but a longer press can change by several levels at once. It is also not entirely clear from the LED read-out what each intermediate level represents: how many Kelvin in one stop? How much power? The colour change seems to be linear and the brightness logarithmic (i.e. f-stops) but it is hard to gauge. (Edit:Â Ledixis saysÂ the power and colour steps are 3% and 100 Kelvin, respectively.)

The Bluetooth controller is a repurposed gaming controller for tablets and mobile phones. It is very quick and easy to pair with the Brik. The choice of controls is a bit of an odd one as it involves using analogue joysticks to adjust discrete digital power levels of the Brik.Â You can useÂ the X/Y buttons toÂ skip quickly from minimum to maximum power, or A/B to jumpÂ fromÂ coolest to warmest colour temperature. The D-padÂ can be used to select singleÂ Briks in yourÂ array to adjust individuallyÂ (but I didn’t discover this feature before returning the product,Â so haven’t tested it).Â The shoulder buttonsÂ can be used to save and recallÂ presets. The buttons areÂ quick, easy and convenient to use but the joysticks are not.

Each of the joysticks isÂ intended to adjust the power orÂ colour one step at a time, but it is impossible to tell how far or how quickly to move eachÂ stick to get one step of adjustment â€” there is no feedback and the difference can be hard to perceive by eye, so if you want precise adjustments you actually have to standÂ behind the Brik and look at the control panel. If this were bound to the D-pad instead then it would be much more sensible. There will be an Android app for controlling the light from your phone, but it is not yet available on the Play Store.

We did not have a Canon LP-E6 battery to hand so were only able to test the Brik using the mains adapter. We did however still manage to do some testingÂ outdoors, thanks to aÂ Tronix Explorer inverter, but there wasÂ no opportunity to do run-and-gun style shooting with it.

The Exalux Brik is a seriously bright LED. Turn one on in the studio and you may think it is at its most dazzling, only to realise there are another three power levels to go. A “Superflux” mode increases the maximum output per module even further, from 500 lumens 800 lumens.

As a small continuous light source, there is no hope of overpowering the sun with this thing, but take it into the shade and it does a fine job of filling in shadows, even on a very bright sunny day (for Edinburgh anyway). The photos below show the difference between no light and peak brightness. The daylight mode has no colour cast and no hint of flickering at any power level. You can easily use it to mix withÂ daylight and produce a very natural-looking result.

The low 3200K colour temperature mode is designed for matching with warmer light sources like tungsten lamps, but you can also use it for aÂ warmer lookÂ in a cooler scene. The examples below have the Brik set to full 3200K but you can pick one of six intermediate levels for a subtler effect.

The modular design of the Briks mean you can rearrange the panels into any shape you like. Our kit contrained four Briks, so we had the option of a T-shape, a square array or a long strip light. This freedom makes the Exalux system especially well-suited to product photography and still life, as rather than adding light modifiers (and losing precious photons) you can simply change the shape of your light source. If using the lights as an on-camera fill light for video, you might alsoÂ opt only to use one or two for a more mobile set-up.

Unlike other LED panels that can be connected together, however, it is important to remember that one Briks lighting kit is really just one light with a changeable shape. Extra modulesÂ make the light bigger but you cannot use the Briks Modules independently without an extra controller and power source. For a full studio set-up made from fairly high-end lights like this, the cost could quickly add up. Ledixis saidÂ they are working on a solution to using Briks independently without an extra controller.

Exalux’s colour accuracy and consistency is noticeable even with the naked eye. One of the things it showed was just how significantÂ the green colour cast of the Flashpoint 500C is, making mixing the two for the following images a challenge for post-processing.

Used as a lone light source, the Brik output isÂ so close to 5600KÂ that white balancing can beÂ as simple as setting your camera to the “Daylight” preset and needing no further editing.

Overall, the Exalux Briks are a good photographic lighting system. It is probably aimed primarily at video shooters but works well for stills. The ability to change the shape makes it easy to do still life photography without any external light modifiers. The output is very bright, making it suitable even for outdoor use and balancing with our light sources. The colour accuracy and consistency are first-rate. Build quality is good. Assembly is easy but a little fiddly and probably needs to be done in advance for any run-and-gun-style assignments. The controls, especially wireless controls, do not match up to the rest of the design.

Ideally, I would love to have several lights like these for a full studio setup, but then there is the price. UKphotodistro is doing a Lite2Go Starter kit â€” a smaller version of the kit reviewed here, including a CP-E6 battery but just one Brik instead of four â€” for Â£790 including VAT. The LiteInBox kit reviewed here is over â‚¬2,500 from one continental dealer. A 15-panel setup would reportedly be over Â£3,500. A full setup thus has a big outlay that will put off most enthusiasts. This kind of high-quality light source is aimed squarely at professional photographers and videographers. Not for me, then, but an excellent light for those who need it.