Recently a UK company announced the Faith SpeedLight Stand, a product that “raises the standards of the humble light stand” by including an integrated umbrella holder and unique friction-locking mechanism.

So, is it any good? InspiredPhotoGear kindly sent us a sample unit (FFL-F1) to try for ourselves.

This is a very light stand indeed, to be honest, it feels like it weighs less than my speedlights. That could be handy for running around on public transport or hiking over hills.

Taking it out the bag, the unit itself is incredibly simple. You just pop the tripod part on the floor and pull the stand upwards to expand it, then push it down towards the floor to shorten it. The unit relies on friction to hold its height, working on the assumption that it will be holding a Speedlight and small brolly.

There is a simple and elegant design for holding an umbrella in place as well as a (removable) standard hotshoe for the Speedlight. So, no need for adaptors.

To save weight, a lightweight metal is used for the construction, with narrow tubing and lightweight rivets for holding the legs to the base.

I first tried the unit during a home shoot of my own children. It was easy to move around and has a small compact footprint.

However, even in this easily-controlled environment, its weaknesses soon become apparent. It wobbles and is very easy to knock over when used on a solid floor. After putting the unit down, with a Speedlight and a mini beauty dish (from Viewfinder Photography), it needed a noticeable period of time to stop wobbling before you could start taking photos.

Although the stand itself is very light indeed, and as such potentially unstable by the time you add an umbrella, the manufacturers do include a rubber water belt that can be easily filled from a tap to add extra weight. The water belt is not that big, it is like a smallish rubber ring. It does fill very easily from a tap and holds in place quite nicely.

The water belt certainly helps with lowing the centre of gravity, but it doesnâ€™t stop the wobble. Having said that, if you are not moving your kit around a lot, then that may not matter.

My next shoot was outside, given the recent extreme windy weather, I waited for a reasonably calm day. One really well thought out feature of the stand is a spike which lives recessed into the stand, by a reversible screw. It can be taken out and screwed back in reverse, leaving a ground spike to help the stand be planted firmly into the ground. 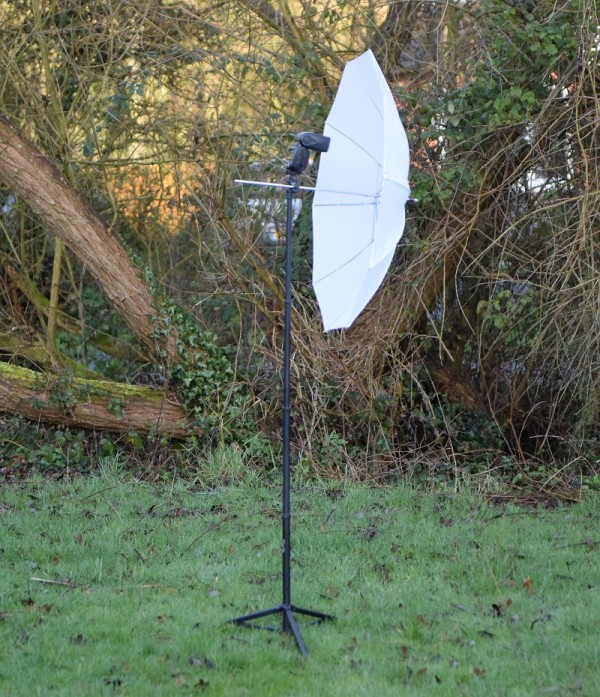 I was not worried about it falling over of its own accord, but you would need to be cautious about gusty days as that brolly is pretty much a perfect sail. You might want to be careful about having to chase down a four-hundred-pound Speedlight during a wedding shoot.

My next shoot was during a Green Screen training session I was running, with a dozen professional photographers. I used it to demonstrate adding an extra hair light for bigger groups. It got knocked over a couple of times, but being experienced with photography equipment, my colleagues caught it and there was no harm done.

Although the stand itself is very light indeed, and as such potentially unstable by the time you add an umbrella, the manufacturers do include a rubber water belt that can be easily filled from a tap to add extra weight.The water belt is not that big, it is like a smallish rubber ring and it does fill very easily and holds in place quite nicely.

Having tried the stand both with and without the water belt, I can say that it does make a big difference. After all, although it does not weigh a great deal when full, neither does the stand.

I would not want to put a really big brolly on the stand, but a smallish one or a shoot-through one is a lot more stable with the weight than without it.

This is a pretty good concept and I really wanted it to work for me. Unfortunately, the stand’s main strengths are also its main weaknesses. It is really lightweight and to save on production costs cheap parts have been used where more robust ones are needed.

During all my use of the stand, I felt that I was going to break the hotshoe, but I have a few eBay ones (always good to have spares, eh?) so I would use these myself. The friction-only locking for the stand just did not feel robust and I was constantly pressing the unit down by accident and having to pull it back up again. The potentially biggest problem is the leg rivet design. They just do not look strong enough for regular use.

Now, to be fair, if you are only ever using a small brolly and an inexpensive Speedlight and weight is your primary concern, then these may not be issues for you. The addition of a water belt ballast is a pretty good idea and this certainly helps.

The use of thicker tubes, better rivets, a more robust hotshoe and any sort of locking mechanism would instantly transform this product.

For me, unfortunately I was disappointed, but my standards are very high indeed as I expect all of my equipment to survive years of daily use. But for small flash users, these may not get the daily hammering that some equipment does. It is nice to see companies looking to innovate.

The Faith SpeedLight Stand is available for Â£49.99 from InspiredPhotoGear.