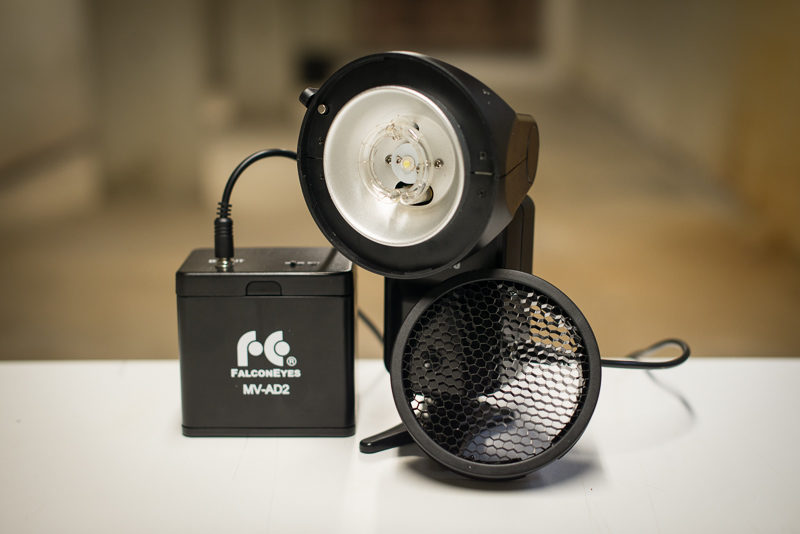 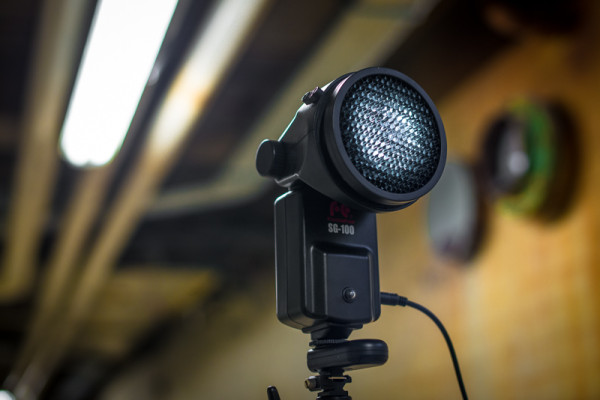 Speedlight on steroids or a pint-sized studio flash? Call it what you want, but one thing is certain: the Falcon Eyes SG-100BK is big. Not as big as a monobloc, but big for a speedlight, bigger than a Nikon SB900. The 100Ws flash includes a battery pack which has enough power for 1000 full power flashes.

Reasonably priced at 189,90â‚¬ at the time of review, this seems like a good flash for the strobist who wants to play with a bit more power. My Westcott Apollo softbox soaks up quite a bit of power, so the SG-100 seemed like a good replacement of my SB-800.

Paris-based camera store LovinpixÂ provided a sample for us to test and see if it meets our expectations. 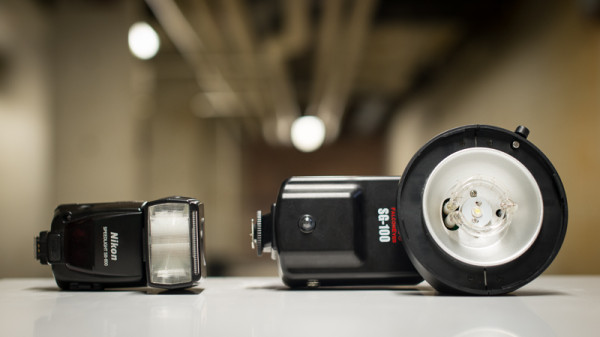 When I unboxed the SG-100, the first thing I noticed was how much was included in the set. The box is really big, but so is the flash. The kit includes: 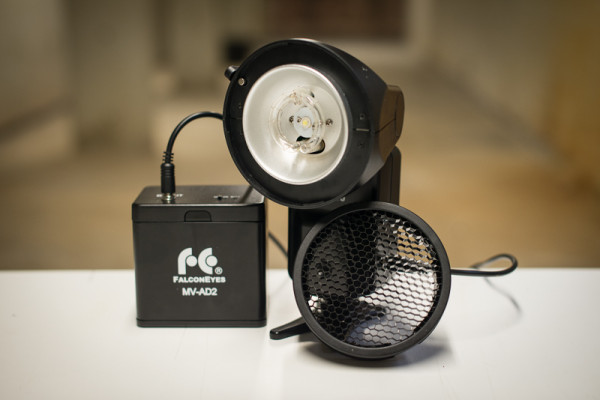 Everything that is needed to start shooting is included. The flash only works when the battery pack is used, so it is a bit more cumbersome than a SB-800, but that is the price for having that extra power. The battery fits two Sony NP-F960F 6000mAh batteries in order to make it last 1000 full power shots. On the top there is a LED that either is green or red; no information is given on how much batteries are remaining. 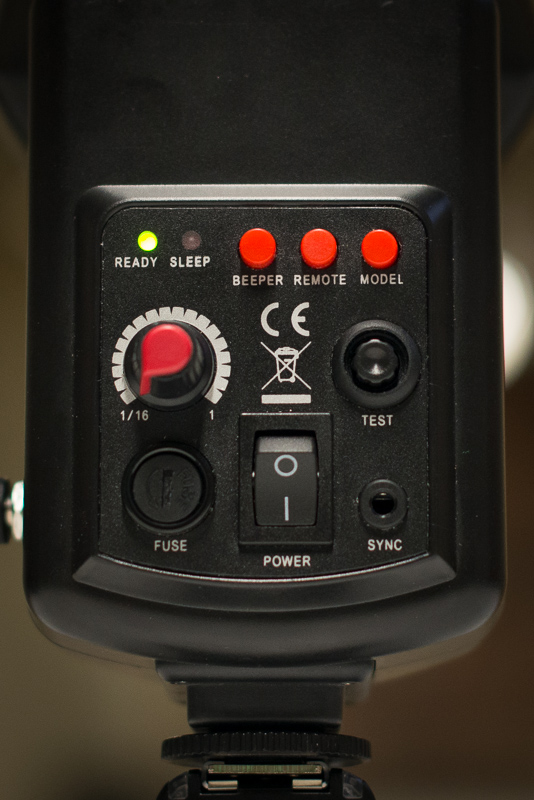 On the back of the flash there is a knob which can be rotated to adjust the power, from 1/1 to 1/16. There is a big switch to turn the flash either on or off and some switches to toggle the modeling LED, the sound and optical slave. You can trigger the flash with the hot shoe, a 3.5mm jack or using the optical slave. All quite simple â€” nothing fancy to see there. 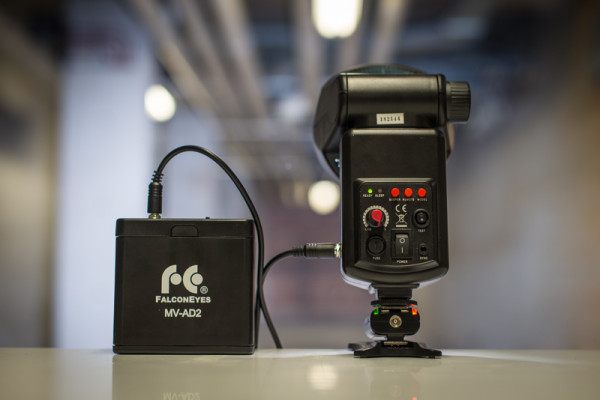 When the flash arrives the head is fitted with a grid, to protect the flash tube, but instead of the grid optional accessoriesÂ can be mounted as well. There is a knob on the side of the flash which can be tightened to prevent the flash head drooping when using heavier light modifiers.

As with Yongnuo flashes, you can notice by just touching the plastic that the build quality is not on par with Nikon or Canon, but it comes close. The flash feels solid. It’s not high-tech, but nothing to complain about.

There are some flaws in the design though. For example I have no idea where to put my battery pack during a shoot. It has a belt clip which is too unstable to hang the battery pack from the stand, as I encountered twice during one photoshoot.

As mentioned before, on the battery pack there is a light which is either green or red: you know when you are out of power, but there is not a charge indicator. Can already see it happen that I have no more power since the flash can last up to 1000 full power flashes, and I think it will still last (like it happened with David in his monobloc review).

In the end, all that matters is the light itself. How much is produced and how nicely is it spread? Do not be fooled by the low guide number: this is due to the fact the head cannot zoom. Guide numbers are calculated not by how much light there is in total, but how much light falls on the subject at a certain effective focal length. When filling up light modifiers it is better to look at the power of a flash instead of the guide number. Used with light modifiers, this flash is almost twice as powerful as a conventional speedlight, such as the Nikon SB-800 that I will be using for my comparisons.

I tested the SG-100 by pointing it at a wall, positioning the flash roughly 1 meter away . The shots underneath were made with ISO 100, f/20. When the shots are compared we see that the SG-100 floods the scene with light, while the SB-800 is more center-focused.Â When the SB-800 is set to 24mm the light intensity is higher in the middle, but covers less of the frame. With the flip-down diffuser the SB-800 almost covers the spread of the SG-100, but is 1 stop less bright. The grid for the SG-100 works well, but I think the main reason that they included it is to protect the flash tube while transport.

It is safe to say that we can see that the SG-100 has more power than the SB-800, but what is the most interesting is the way how it throws the light. Nice, even spread which should result in some great performance when combined with a softbox.

I did a little photoshoot with the SG-100BK during one of few sunny days here in Holland. During the shoot I tried to kill the ambient as much as possible, which is quite a difficult task when you are using light modifiers.

The accessory that I used was a Westcott Apollo 70cm softbox. The flash is almost too big to fit inside the softbox, something that should be noted for people that are going to buy this flash. If you have light modifiers specially designed for speedlights, fitting the Falcon Eyes head into the same space could be quite difficult. 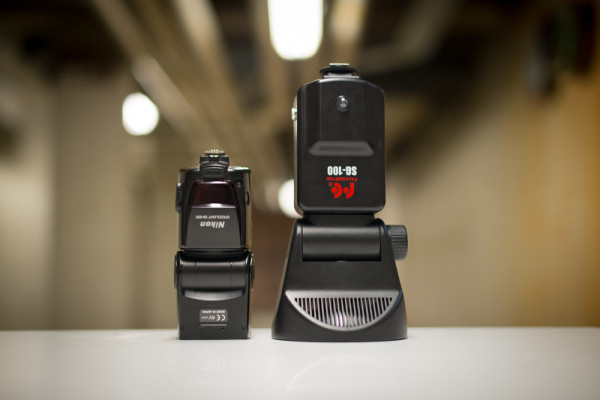 When the flash was turned on full power it I was able to shoot with f/8 to f/11, ISO 100, with the softbox a little bit less than 1 meter away. Compared to my SB-800, the SG-100BK has about one more stop of power when used in the softbox.

With my SB-800 I prefer to not shoot on full power since overheating can be a problem. With the SG-100BK the flash tube is exposed to air so this is not an issue. I think I have shot 50 frames with full power with just a few short breaks of 3 to 5 seconds, and I didn’t notice any complaints from the flash. The ready beep is very useful when shooting at full power, so you can time the shots easily.

What was very annoying that the battery pack has no strap to hang it to a light stand. During my shoot I dropped it twice from 1.5 meters, but it survived so I can say empirically that the battery pack is well built. The first time I tried to catch it with my foot (natural instinct: works great with glass bottles, but do not try it with kitchen knivesâ€¦) and my toe definitely came off worse than the battery pack did. 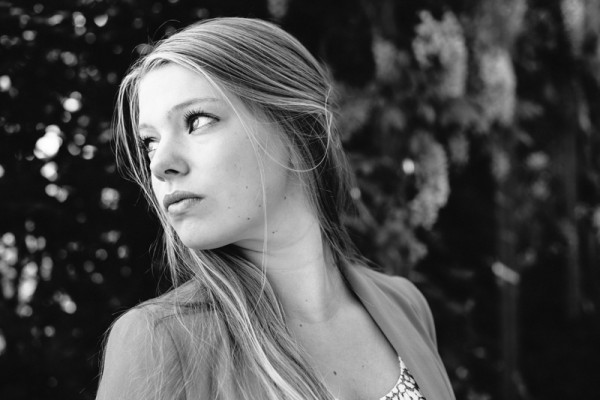 After taking a break of a few minutes I turned the flash back on and moved it from the sun to the shade. Around 1/8 power was enough to light my model, but on the 5th frame the flash didn’t react any more. The flash died, but the batteries were still freshâ€¦ Turning the flash on and off again partly solved my problems, since on the 4th frame this time the flash again stopped working.

What happened (I was able to reproduce the effect at home) is that at lower power, and with rapid succession of the shots the flash stops working. At full power this does not happen. My thoughts there was something wrong with the capacitor in the flash. I tried again to reproduce the effect, but before I did the test, I turned on the flash with the modeling lamp for 5 minutes. This time the effect did not occur. I have no idea why this happens â€” maybe some readers do â€” but my advice is to turn on the flash in plenty of time before your shoot.

The Falcon Eyes SG-100BK is a heavy duty flash on a budget. It is great for people that have to shoot loads of pictures without the availability of AC power. The performance you get for 189,90â‚¬ is very reasonable,Â  especially if you consider that all the batteries are included in the kit. It seems that the flash is made to fill up light modifiers nicely, something that is difficult for speedlights.

Not worrying about overheating makes me more comfortable to use the flash at full power. Small stuff like the battery level indicator, the battery pack without strap and the low-power bug are annoying, but they are bearable. The SG-100BK might not be perfect, but is an excellent choice for the strobist on a budget. Â Instead of adding another speedlight to your kit, maybe it is worthwhile considering the Falcon Eyes SG-100BK. 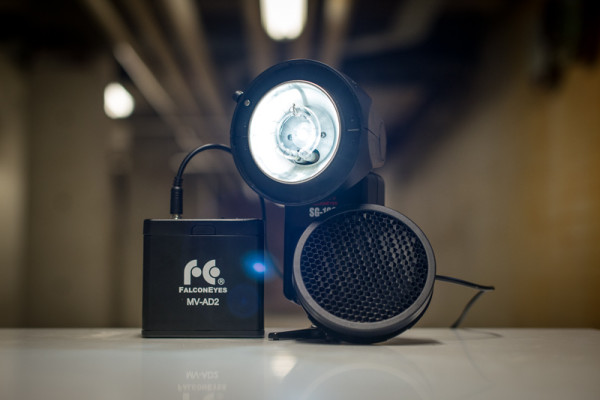 Falcon Eyes products are distributed in Europe byÂ BenÃ¨l BV, based in the Netherlands. The sample in this review was provided by Lovinpix.