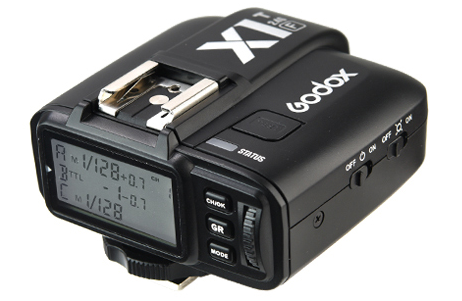 Flash and trigger manufacturers have recently released a bevy of firmware updates, adding sync support for the latest cameras and lights and in some cases adding new features or improving existing ones.

Firmware v1.03 for the Cactus RF60X flash also supports cross-brand TTL. The update is free and turns the Cactus V6 II and V6 IIs into cross-brand TTL triggers. The X-TTL update was first announced earlier this year and has been rolling out in stages to the different brands.

Now, the only combination that doesn’t work is using a Fujifilm or Sigma camera with a Sony P-TTL flash. For more information and to download the firmware, visit the Cactus X-TTL product page.

Shenzhen-based manufacturer Godox has released firmware update G2 for the X1 system. Firmware version V03, when uploaded to the Godox X1-TO wireless transmitter for Olympus and Panasonic, will add custom function settings and ensure that the X1-T’s settings do not conflict with those set via the new GodoxPhoto smartphone app.

Firmware V03 for the Godox X1-TF for Fuji adds a number of new features. Support for the Fujifilm GFX 50s medium format camera has been added. As with the Micro Four Thirds update, the X1-T will not override settings made in the GodoxPhoto app.

What’s more, the manufacturer has added non-TTL high-speed sync support for Fujifilm. Custom function setting f11 allows fast shutter speeds, up to 1/1250 second, to be used with non-TTL studio flashes. For this to work, all flashes must be in manual (M) mode. According to LR reader Steven van W, this works with the TT600 and AD360 (non-TTL) up to 1/2000 second on the Fuji X100F and X100T; beyond that, the flash fires but you are likely to get a black frame.

To download the update, visit the Godox web site.

German manufacturer Metz Mecatech has announced firmware version 1.2 for its Mecablitz M400 flash for Fujifilm, bringing Fujifilm remote flash mode, including wireless TTL and high-speed synchronisation support. The update also includes other improvements to features such as the autofocus-assist beam and OLED display.

An update has also been announced for the Micro Four Thirds version of the M400 and 52 AF-1 and 26 AF-2 for Pentax. This improves performance in various functions including remote flash mode and exposure control.

The firmware updates can be user-installed using the USB port on the flashes themselves. Metz’s updating software now supports the Macintosh operating system in addition to Windows. Visit the Metz web site for further information.

Nissin have added high-speed synchronisation (HSS) support to their flashes for Fujifilm cameras. To obtain the firmware update, you need to take or send your flashes along to an official Nissin service centre, as apparently it can’t be done yourself.

Flashes with a Fujifilm version include the Nissin i40, i60A and Di700 A, as well as the Air 1 Commander trigger. After the firmware update, they will work in high-speed sync mode with the Fuji GFX 50s, X-T2, X-T1 (GS), X-T20 and X-Pro2. For more information, consult the manufacturer’s compatibility chart.

Unlike the FlexTT5 for Canon, which was recently replaced by the FlexTT6, PocketWizard were able to add the support to the FlexTT5 for Nikon via new firmware rather than issuing a whole new device.

For a full list of changes and to download the new firmware, visit the PocketWizard web site. As of the latest version, the FlexTT5 for Nikon also supports “custom IDs” to reduce interference. To implement this you need to contact the manufacturer.