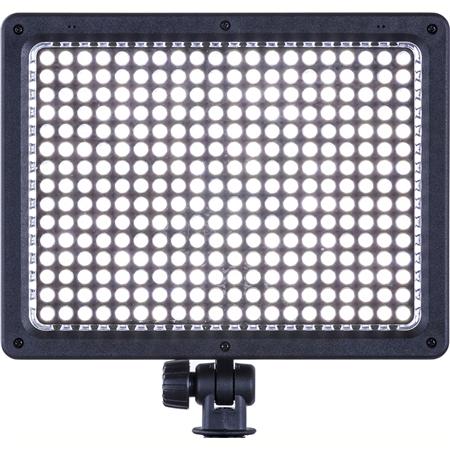 Adorama has released the Flashpoint 300 LED On-Camera Light with Audio, a video lamp with built-in stereo microphones and automatic brightness adjustment. The multi-use accessory isÂ aimed at film-makersÂ trying to reduce the amount of gear they carry on location.

As a basic video lamp the Auto 300 LED has an 80° beam spread and 7140 lux at 0.5m, with power adjustable from 0â€“100% using a dimmer on the rear. A fine-tuning mode tweaks the power levels in smaller increments. At a press of a button, the light can switch from manual-control mode to auto mode, which adjusts the brightness automatically based on the ambient conditions, providing a “lightning fast solution for run-and-gun shooters”, according to the product description. There is also a bonus “SOS” flashing mode for some reason.

For audio recording, the array has two integrated condenser microphones (in the top corners), which pass “clean audio” to your video camera or recorder using the included mini-jack cable. This means you can effectively have video lighting and audio recording both supplied on the one hotshoe of your camera, without unwieldy brackets. This is not the first time we have seen LED lighting and audio built into one device: the Yongnuo YN160II from three years ago had the same feature, and the Yongnuo YN300 also included the auto-brightness control, though both appear to be different products to the Flashpoint Auto 300 LED.

The whole unit is powered by a Sony NP 7.4v lithium battery or via DC adapter. The colour rendering index (CRI) is specified as “at least 85%”. A carrying case, diffusion and tungsten colour-balance panels are included.

The Flashpoint 300 LED is available now from Adorama, priced $79.95 (apparently a $20 saving on the usual price). Click here for more information.

What do you think of dual-use lights and microphones? Are they the best of both worlds or jack-of-all-trades, master of none? Share your thoughts in the comments below.