Adorama is now selling its own version of the Godox AR400 ring flash. The Flashpoint Ring Li-On (Li-ion, surely?) is a 400Ws flash that â€” unlike some high-end devices that require external powerÂ packs â€” is an entirely self-contained system, powered from an internal, user-replaceable lithium-ion battery. 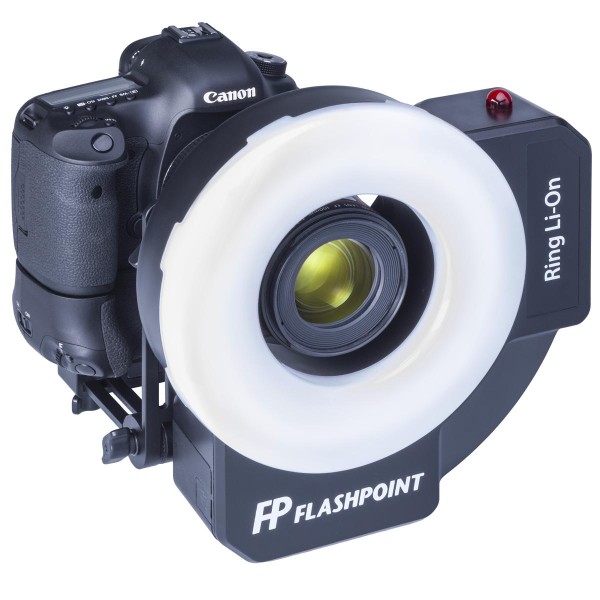 ItsÂ New York-based retailer says: “This versatile ringflash is an instant favorite tool of the professional studio photographer due to its ability to produce virtually shadow-free lighting, providing mysterious catchlights ‘rings’ in the eyes of subjects when used with fashion and portrait work and a ‘must-have’ for nature and field shooters in macro and close-up situations. Its most important characteristic is to create absolute even illumination with few shadows visible in the photograph.”

Power control is from full to 1/128 of full output, with an LED modelling/video lamp (with three intensity settings) also built in. You can poke your camera lens through the middle of the flash for the traditional ‘shadowless’ ringlight effect, or you can mount the Ring Li-On on a light stand and use it remotely. Its round shape means it can give particularly even illumination in studio umbrellas. The device is compatible with the Flashpoint Wave Commander flash triggering/control system and also features an optical slave cell.

The recycle time is between 0.05 and 2.8 seconds and the battery supports up to 450 full power flashes from a single charge. You have a range of mounting options depending on whether you want to use the Ring handheld, on a tripod or on a light stand.

The Flashpoint Ring Li-On is available now from Adorama for $499.95. In other markets it is sold as the Godox AR400Â or under other brands.