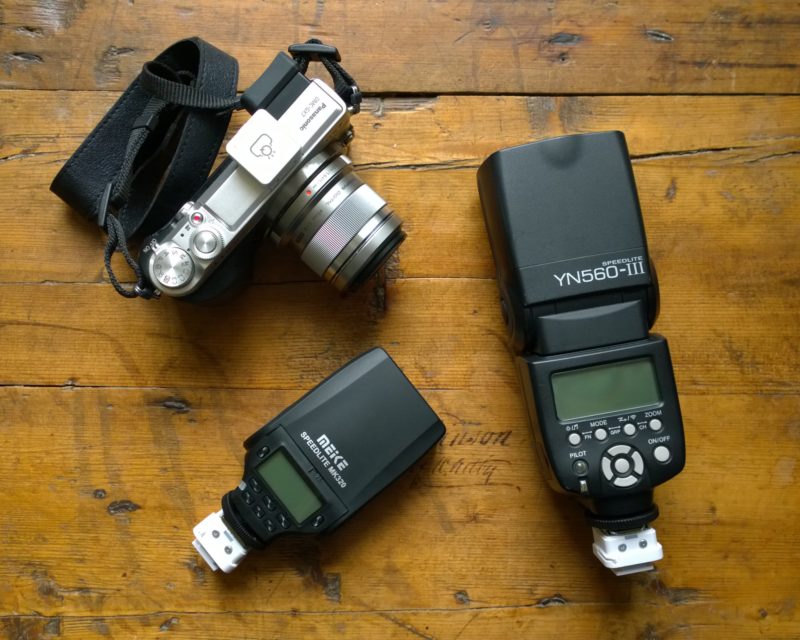 Lightpix Labs and UKphotodistro kindly sent me a set of FlashQ wireless triggers to review. Are they any good? Let’s find out.

The FlashQ is designed as a compact and stylish take on the wireless flash trigger. You can get small and fashionable cameras, bags and straps, so Lightpix Labs decided to add a touch of the same flair to lighting gear as well. The FlashQ is available in black, white, pink and blue, to cater to all tastes. I was sent the white version, which doesn’t quite match my mostly silver and black gear, but has its own charm I suppose.

There are two components in a kit: the transmitter, which fits in your camera hotshoe, and the receiver, which clips onto your flashes or connects to them via sync cord. They communicate via 2.4GHz radio signals, letting you take your flash off the camera for more interesting lighting and creative effects, as well as taking weight off your hotshoe.

The FlashQ is tagged “the little cube for flash photography” for a reason. These things are tiny. They really take up no room whatsoever. You could keep the transmitter on your camera hotshoe permanently. Well, if you could get the transmitter to stay there, that is: there is no locking wheel to keep it securely in place, so be prepared for the trigger to slide out of place sometimes. It hasn’t fallen out of my GX7 yet but sometimes it loses contact with the hotshoe pins and needs pushing back into place to keep it firing. Your mileage may vary, depending on how snug your camera hotshoe is. 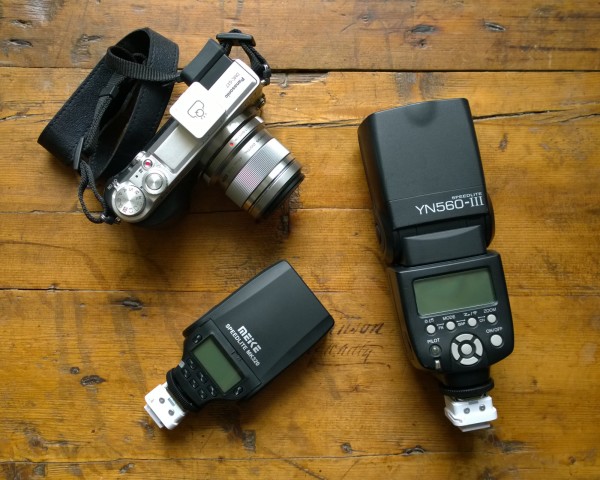 The small size comes with some trade-offs. The antenna is smaller than might be found in some other triggers, so the range is shorter. More on that later. There is also no room for a pair of AAs so you power the FlashQ from a CR2032 watch battery. This is fine by me; if anything I prefer it â€” you can still get them everywhere and they last for ages.

The transmitter foot is plastic, which is fine: these cubes (well, cuboids-ish) are so small that they are probably indestructible, except the battery door, which feels like it is going to snap every time I close it. However, I haven’t had to change the batteries yet. 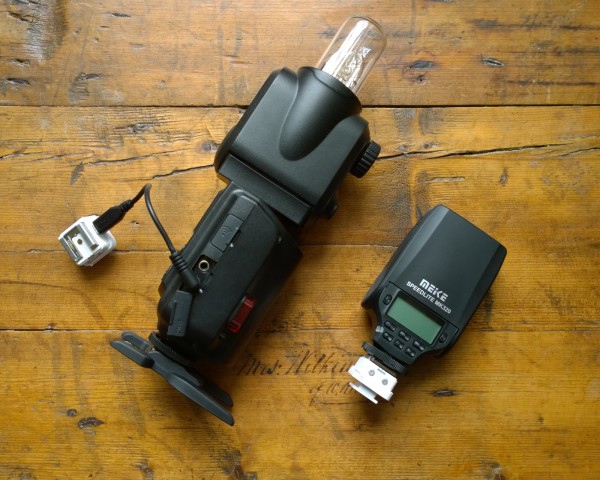 The sync port is microUSB, which makes not a great deal of sense for any reason other than maybe they could not fit anything else (a 3.5mm jack, say) into the limited space. It does mean you can’t just use any old audio cable as a sync cord, and that you have to buy spares from Lightpix Labs, but at least they include a PC sync cable with each receiver you purchase.

These triggers are very basic: no TTL, high-speed sync or anything fancy like that. Just basic, universal triggering for any flash in manual mode. They have two buttons: on/off and test flash, and you don’t even have to worry about getting the channels correct because the FlashQ modules pair automatically.

One thing takes some getting used to: because of the design, the transmitter is basically an upside-down receiver. This means the buttons are the opposite way round on the transmitter and the receiver. Sometimes I wondered why the trigger wouldn’t turn on or wouldn’t fire a test flash, until I realised I was pressing the wrong button. Turning the triggers on and off means holding the power button down for rather a long time, but this is a minor quibble.

The indicator LEDs will flash red, green and blue when powering up. It will light up red when you fire a flash or use the test button, and briefly green when you turn it off. I haven’t had any problems with the FlashQ failing to pair with a nearby receiver yet. As pairing is automatic, if you and your friend are both using FlashQs in the same vicinity then I am not sure whether you can stop yourselves from triggering each other’s lights.

Lightpix Labs had to figure out a way to have space in the top of the FlashQ receiver for a hotshoe, room in the bottom for a tripod mount and still let the user change the battery. The solution is a compromise: the receiver itself has no mounting apparatus and instead slides into a plastic adapter with a coldshoe foot and (metal) 1/4-inch tripod thread.

In theory it works well enough, but the interface between the two is very flimsy, so you will want to avoid the FlashQ receiver taking any strain more than holding a small speedlight upright. Each receiver is supplied with a microUSB-to-PC sync cable (not a screw-lock kind) so you can have it hang freely instead. Extra cables with 2.5mm, 3.5mm and 6.35mm plugs for studio lights are available separately for $6.00 from Lightpix Labs, which is convenient if a little expensive. I have also been using a new Godox S-fit adapter that lets me trigger even a giant Witstro bare-bulb flash through the hotshoe with the FlashQ without any worries.

The FlashQ, being only small, has a shorter operating range than some other radio triggers. The manufacturer specifies a 10-metre range, which I set out to test using the standardised “walk away from the flash and take photos until it doesn’t fire” technique. The FlashQ reliably reached and exceeded the listed distance, working up to around 30 metres or so before firing became inconsistent. It even seemed like the angle to which I aimed the transmitter had an effect (having the flash in the centre of the frame is possibly better) but this could be a coincidence.

Note that this was under fairly ideal conditions: the cows were out of the field that day so weren’t present to obstruct the signal, nor was it particularly humid, and here in rural North Yorkshire we are unfamiliar with mobile phone or WiFi signal interference. Nevertheless the FlashQ seems to provide more than enough range for users’ needs. 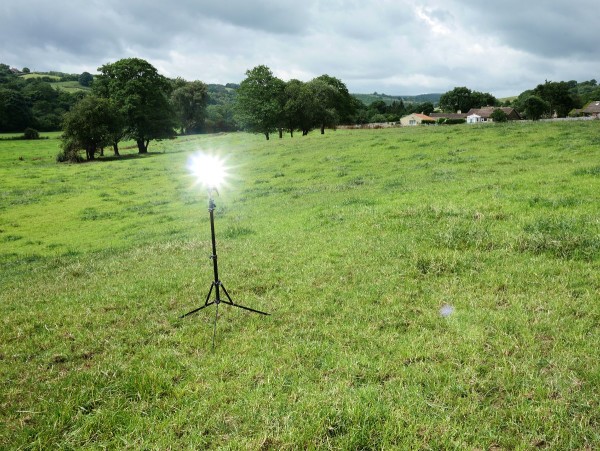 My Lumix GX7’s top sync speed through the hotshoe is 1/250 second. The FlashQ synchronises cleanly at this speed, and is more than acceptable at 1/320 second too (almost imperceptible feathering at the top of the frame). At 1/400 second, a noticeable black band appears (which you might still get away with in some outdoor setups) but by 1/500 second the image is all but unusable. This is very good.

If you are using a point-and-shoot camera rather than one with interchangeable lenses, chances are it has an electronic shutter and a CCD, meaning you do not have an “X-Sync” per se and the FlashQ will synchronise flashes up to 1/1000 second or more. I didn’t have one on hand to test but Lightpix Labs says the FlashQ’s maximum latency is 900 Âµs (1/1111 second). 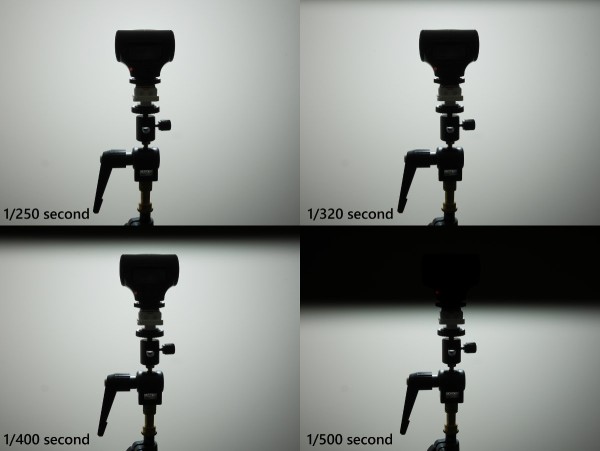 In all my shooting, the FlashQ has been reliable and consistent at triggering. Any missed shots were the result of flashes going to sleep or not recharging quickly enough, or simply me forgetting to switch everything on. I was helping take pictures to sell a large number of items on eBay, and we worked through a over a dozen items, shot from various angles in a light tent, without the FlashQ missing a beat.

Lightpix Labs says the FlashQ has a six-month standby time with CR2032 batteries. I have only had the triggers for about a month, so all I can say is that the batteries than came with the units have not run out yet.

I recently switched from the Nikon D700, a great big camera, to the Panasonic GX7, which is considerably smaller. Putting full-sized flashes on this camera looks a bit silly, and the same goes for triggers, not to mention that most flash triggers from Yongnuo, Pixel et al have Nikon i-TTL pin layouts, which are temperamental when you put them in a Micro Four Thirds hotshoe (typically firing only every other shot).

Recent small-form-factor accessories like the Nissin i40, MeiKe MK320 and FlashQ all show that enthusiast-level lighting equipment can be size-appropriate to mirrorless and compact cameras. A small flash with a small trigger and a small camera can let you produce outstanding results with gear you can fit in your pocket. Who needs camera bags? Conceivably you can now take off-camera flash on trips where you don’t even plan to use off-camera flash. Maybe a cool effect for that social shot, better-looking flower photos in the park or a creative take on a tourist snap, now within reach without having to bring along a padded backpack. Or get that killer self-portrait for ultimate internet points (I wonder if a flash will fit on a selfie stick?)

FlashQ is especially well-geared to those who shoot with a camera in one hand and a flash in the other, because it doesn’t stick out perpendicularly to the flash like so many AAA-powered receivers do. This makes it easier to grip the base of the flash unit like a handle.

A set of FlashQs could easily replace any other flash triggering system you are already using, so long as you don’t put too much weight on the receivers. I have used a lot of radio remotes from all sorts of brands and the only thing I have noticed about the FlashQ is that I feel more inclined to take it out with me.

There is really not much more to say about the FlashQ. It is very small, looks quite nice, is easy to use and does what a flash trigger is supposed to do: trigger flashes. The performance is more than adequate, with fast synchronisation, no misfires and decent enough range for all likely usage scenarios I can think of. It is not the most durable accessory around, but this is easily worked around and if you are using really heavy gear then you might be missing the point. MicroUSB sync cords still seem odd but at least they are included. A locking mechanism for the transmitter would be nice but the lack of one is not a deal-breaker.

FlashQ’s simplicity is also its main appeal: because it doesn’t care about TTL or brand-specific features, it will work on any camera with a hotshoe and trigger any flash (except Sony Multi-Interface) with a hotshoe foot. This means non-Canon/Nikon mirrorless cameras and compacts, all too often neglected by many manufacturers, should have no trouble getting the most out of this handy device. The pricing is also very competitive with other popular flash triggering systems from Yongnuo et al. All in all, the FlashQ looks to make flash photography more accessible to beginners and small camera users.

If you are looking for a portable, universal and stylish wireless trigger, the FlashQ is a fine choice. If you need the absolute ultimate in range and professional-level durability then you might want to look elsewhere, but get a set of these anyway for your days off.