Not long after Limelite revealed its innovative new tube-shaped lighting concept at Focus 2013, American photographer Peter Hurley has announced his own ‘Medusa’ lighting system based on a similar concept at the WPPI Expo in Las Vegas.

The HurleyPro Medusa looks like a fluorescent light bank but each three-foot tube is actually made up of LEDs. Each tube will be fully dimmable, with wireless control from an iOS or Android smartphone or “lamp remote”. 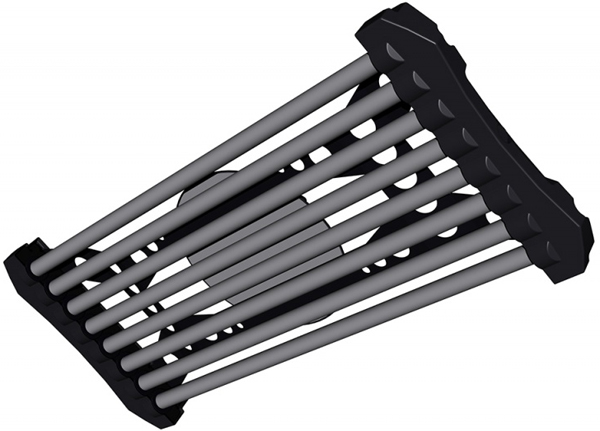 According to the company, each eight-lamp panel draws just 1.36 amps (at 120 Volts) and takes universal mains voltages. Brightness is said to be 2,150 lumens per tube (17,200 per array) with a daylight colour temperature of 5600 Kelvin, but colour rendering index (CRI) is not given.

The lights have a fixed colour temperature and customers are told there will be a “variety of filters available”. The specifications say the Medusa panel will be “portable” without listing an exact weight.

In this interview with Kelby Training, Peter Hurley gives a (fairly vague) description of the features and suggests customer feedback at the WPPI Expo â€” where the system was exhibited â€” has been positive.

Exact pricing and release dates have not been announced, but the Hurley suggests the Medusa will cost in the region of $1500, coming out “hopefully around July 1st”, available from HurleyProGear.com.

Could this be the next big thing in photographic lighting? Let us know what you think.