StroBeam, the UK distributor of both CononMark and F&V products, was using every available centimetre of space on its Focus 2013 stand to show off new lines of photographic equipment. Company owner, Shyam Ramnani, was keen to tell Lighting Rumours all about the new products.

One of the most prominent was the StroBeam D4 HSS IGBT, the convenient flash head with an inconvenient name. Announced several weeks ago, the D4 is a battery-powered monolight with action-freezing flash bursts and full remote control from the camera position, thanks to the “3.2G” transmitter control unit. Responding to speculation that the battery-on-top configuration would be unwieldy, Ramnani demonstrated the light in person, showing that, in context, it’s not all that immense and doesn’t feel too heavy in the hand. That said, it is obviously bigger than a speedlight but it’s specified to be many times more powerful too. 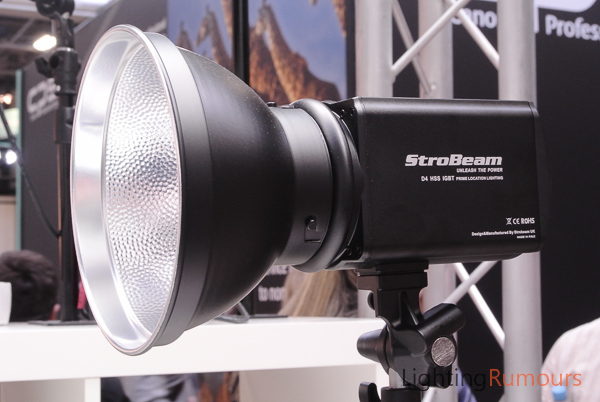 The unique selling point of the D4 HSS IGBT is the “HSS” part. It is not exactly the same mechanism as HSS/FP-Sync in hotshoe flashguns; rather a fixed mode that â€” in tandem with the 3.2G commander â€” synchronises the light with a camera at any shutter speed without black band issues. The downside is that, with the light set to “FP” mode, there is no power adjustment. There are different remotes available for Canon and for Nikon.

Another interesting aspect of the device is that it can read the settings from your camera. Change the focal length or aperture on your DSLR and the 3.2G radio system will send that information to the monolight, where it is displayed in real time on the LCD. A not-inconspicuous “TTL” glyph in the corner of the display indicates that we will see monolights (maybe not this one â€” it’s not clear how they would update the firmware) with full through-the-lens exposure control in the future. 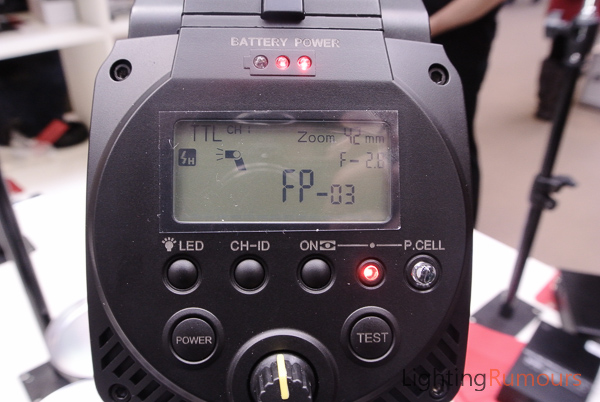 For the moment, the D4 doesn’t do anything with the information from the camera (and you should not buy this product thinking that it will), but Ramnani told Lighting Rumours that the engineers are working on it â€” currently the last obstacle they need to overcome is getting the system to recognise Iso sensitivity settings. Photographers can then expect to see full automatic TTL control in studio and location monolights connected to their camera via 3.2G wireless remote. You heard it here first!

In addition to the D4 HSS IGBT, StroBeam exhibited the CononMark AK E60, a mains-powered, 600-Joule monolight. When it comes to market in the UK it will carry the StroBeam brand and a different model name in an all-new housing, at a price to be confirmed. According to the company, it has a recycle time of less than one second at full power, along with 3.2G wireless control and FP mode as found in the D4. The stand also had a CononMark AK4.0 Leopard on display but Lighting Rumours was told that that model will not be sold in the UK.

Rather disappointingly, all the new StroBeam lights have obscure Comet accessory mounts, instead of the much more universal Bowens S-type. A Comet-Bowens adapter is included in the box with each light but this seems like a half-measure and cannot be as good as having an S-fit bayonet in the first place.

Elsewhere were some TTL triggers, the NK-1/CN-2 from CononMark. It wasn’t possible to try them out at the trade show but there is a set of EL-2 triggers â€” effectively the same but in a different form factor â€” sitting in Lighting Rumours HQ for evaluation. Stay tuned for a review.

The D4 HSS IGBT is available now for Â£499 plus VAT, while more details about the “AK E60” have yet to be announced. Find out more about StroBeam products by visiting their web site. More information on CononMark, the Chinese manufacturer, can be found here.