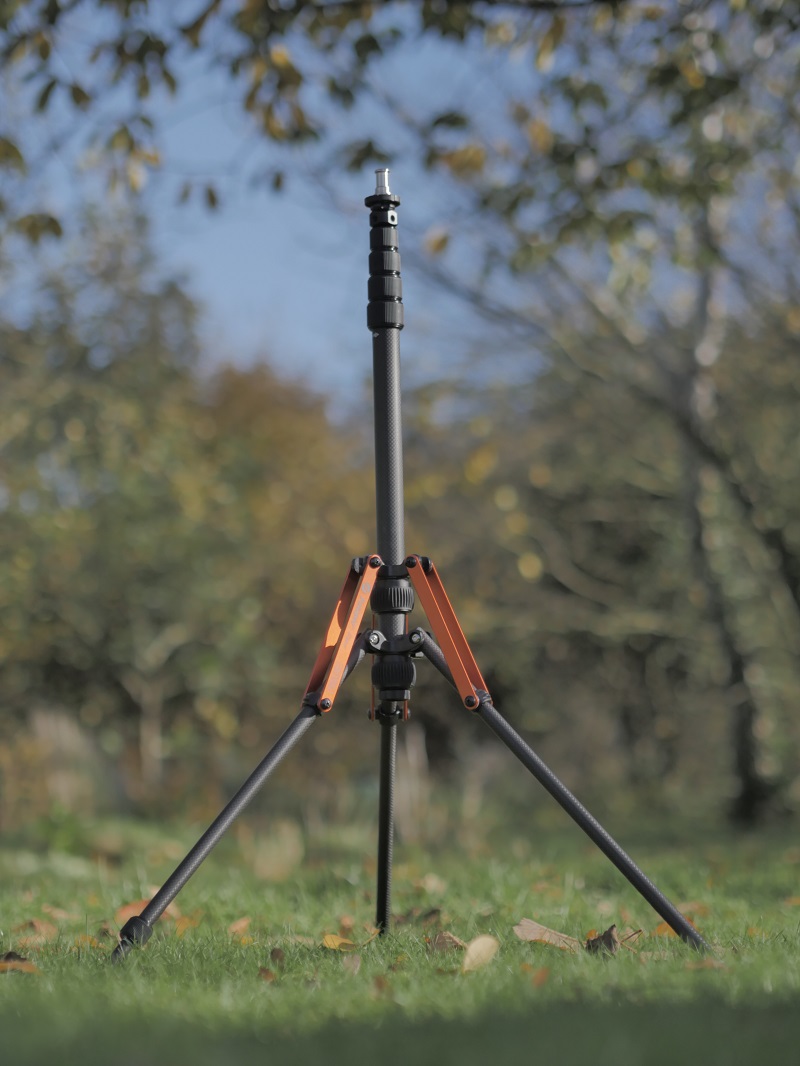 Carbon-fibre light stands are becoming increasingly common. Though the composite material has been used for a long time in tripods and bicycle frames, the overwhelming majority of light stands have been metal until quite recently.

Chinese tripod manufacturer Fotopro has made its first foray into light stands with the Trident TR-01. It comes in two versions: the TR-01A, which is made from aluminium, and the TR-01C, which is carbon fibre. As shown in their promotional video, the TR-01 series are multi-purpose products. It’s a camera tripod (sort of), it’s a light stand, and if you remove the centre column then it can work as a boom arm as well. The design takes the form of a conventional light stand (or tall tripod) or a reflex-folding Nano-style stand, depending which way up you insert the centre column.

Fotopro were kind enough to send me a Trident TR-01C to review. In this article I’ll outline my initial impressions of this stand.

Straight out of the box, the Fotopro Trident looks like a very smart bit of kit. Even non-photographically-minded members of my family commented on the industrial design and how professional it looks. And subsequently surprised by how light it feels in the hand. And then by the cost: introductory pricing on AliExpressÂ seemsÂ like remarkably good value for such a fancy-looking accessory. 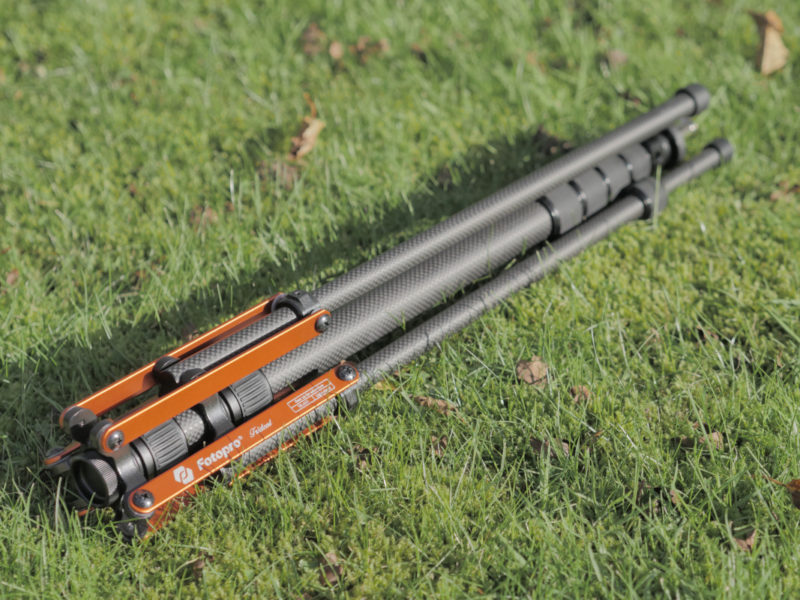 It comes with a nylon carrying bag (which feels fairly cheap but functional) and a small allen key, the latter being for changing the orientation of the built-in bubble level. Why would you need to do this? Well, because the stand has two orientations, depending on which way you insert the centre column. The only difference really is whether the orange braces are above or below the legs. When below, or in ‘tripod mode’, it looks like a conventional light stand or a video tripod (with an unusually tall centre column). When the braces are above, or in ‘light stand’ mode it looks more like a Manfrotto Nano or other reflex-style light stand.

One of the key differences between this stand and some other carbon-fibre competitors is the Trident TR-01C’s legs are carbon fibre tubesâ€”not flat aluminium. This meansâ€”at the cost of making the stand slightly heavier than its competitorsâ€”the Fotopro’s legs extremely stiff, with no flex, making the stand more stable.

Most of the time I think you’ll probably want it in ‘light stand’ mode, since it means the centre column doesn’t prevent you from splaying the legs out as far, and because it is taller without needing to extend the centre column (while still being able to lower it if you need a low minimum height). The main advantage of ‘tripod’ mode is that the column is supported in two locations that are farther apart, potentially making the whole apparatus less prone to flex. That’s the theoryâ€”but I will have to see whether it really makes that much difference in practice. You can also use it ‘upside down’, if you were doing some macro work, for instance.

You can also remove the centre column entirely for use as a boom arm or selfie stick. It’s worth keeping in mind that carbon fibre tubes don’t like clamping forces very much, so while using the Trident’s centre column as a hand-held boom arm or makeshift monopod should certainly be OK, you might want an aluminium boom if you’re planning to clamp it down hard in a tilt bracket or support heavy loads. Just be careful. 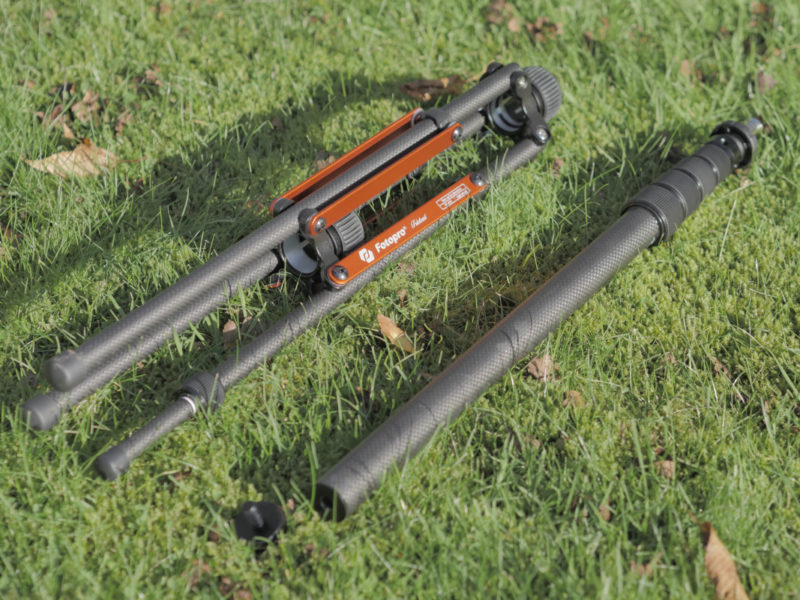 Given the light weight of this standâ€”and how the end of the column (the black round thing in the picture above) unscrews to release it from the rest of the standâ€”I think Fotopro has missed an opportunity by not including a hook on the end. This would let you hang ballast and keep the centre of gravity lower. Maybe they can offer it as an optional accessory (I think it’s a 3/8″ screw thread). Other carbon light stands, such as the similarly-priced Fosoto FT-220, do feature such a hook.

The locking rings for the risers (and for extending/retracting the single levelling leg) are soft-touch with a rubbery coating. Their design means you can’t overtighten the expander-plugs that keep the stand in position, so there’s less risk of accidentally crushing the carbon fibre tubes. It also means, however, that there are no protruding adjustment knobs (unlike on some metal stands) so there’s nowhere to hang things like battery packs, radio triggers, counterweights or a carrying strap. Fotopro actually recommends looping the carrying bag’s strap around the stand using the provided caribiner, but the strap tends to slide around since there is no fixed attachment point, so you might prefer using the carrying bag or just holding the stand in your hand instead.

On the top of the stand there’s a removable metal spigot. With it in place you can attach a flash bracket or other kind of clamp. Unscrew the spigot and there is a 1/4″ tripod thread underneath. I like that the metal spigot is flat on top, rather than having a sharp screw thread, so it isn’t wearing a hole in your bag (unlike my Manfrotto Nano stand).

So far, I have been using the TR-01C to hold up a small flash (Innovatronix CPFlash) and softbox (Glow Hexabox) at a height of around 1.5 metres. It handles this without issue, as you might expect. I have yet to test it in more extreme situations, such as having the stand extended to maximum light, with heavier loads, and outdoors in windy conditions. I am not sure if I would ever use this as a camera tripod for an interchangeable-lens camera, but I might have a go using it with a smartphone and report back if it is sturdy or sways too much. 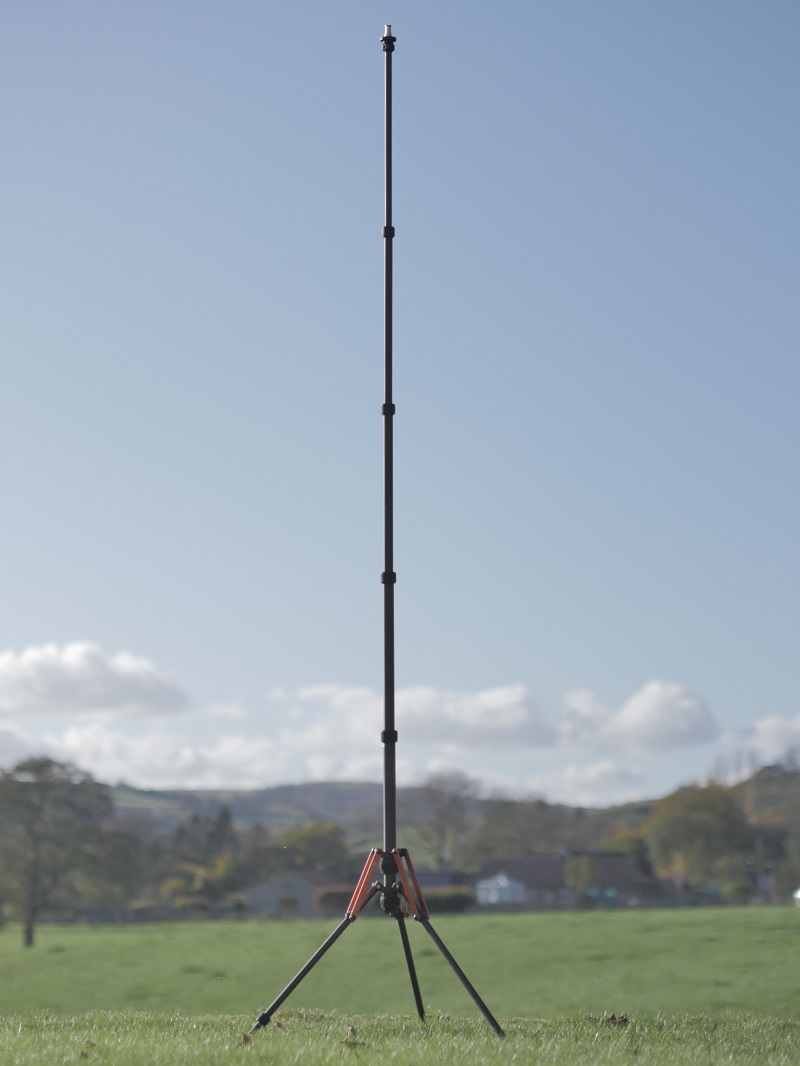 Certainly, if the TR-01C looks industrial, then the Manfrotto Nano 5001B appears agricultural by comparison. The Manfrotto is slightly shorter when folded, but heavier. The two options are roughly the same price, but the added versatility of the Fotopro makes the Manfrotto seem like poorer value. It’s worth noting that all the fastenings on the Fotopro can be tightened or replaced yourself using an allen key or screwdriver. The same cannot be said for stands like the Nano, which are riveted together. On the other hand, I’ve had a Nano for years and it hasn’t fallen apart yet, so I can’t say I’ve needed such reparability in a light stand thus far.

Overall, my first impressions are that this is a well-made, well-thought-out bit of kit, and for the price it seems like a good buy for the enthusiast photographer. Once I’ve had the chance to use it a bit longer, in different situations, it will hopefully become clearer whether the Trident can stand some abuse, or if it is a gadget that is more fragile and needs to be looked after. Obviously it’s not a heavy duty stand, but that doesn’t mean it shouldn’t stand long-term use within specified limits. Remember there is also the cheaper TR-01A, if you don’t fancy taking your chances with carbon fibre.

The Trident TR-01 is probably not for everyone: some people will prefer a stand that folds down a bit flatter or shorter, or that is lighter (there are lighter carbon-fibre stands out there) but it looks pretty good so far, to me.

Thanks to Fotopro for sending me a TR-01C to review. A more in-depth evaluation will follow, once I’ve used it more. There are obviously plenty of things I haven’t covered so far, so if you have any questions or suggestions, please leave them in the comments below.

The Fotopro Trident TR-01C is available now from the official Fotopro store on AliExpress. For more information, visit the manufacturer’s product page.