Fottga are a new Chinese company manufacturing photographic accessories. Their first original product (i.e. not just a re-brand) is a wireless flash trigger called the Lumox 520. Running on the 2.4GHz frequency band, benefits include TTL pass-through and a claimed 200 metre range. It is also designed to work as a remote shutter release, both wired and wirelessly.

Straight out of the box, the the Lumox 520 bears some resemblance to other triggers such as the Phottix Strato II or Pixel Rook. Moreover, on the spec sheet, many of the features inside are also similar, such as TTL pass-through, a remote shutter release function and waking flashes from sleep mode.

One major capability that the Lumox 520 lacks is wireless flash grouping. You can pick one of 16 channels but there is no control beyond that. Many people probably won’t miss this. The lack of gizmos serves to make the Lumox 520 devilishly easy to use, especially for beginners who haven’t used flash triggers before. Indeed, in the (reasonably short and Chinglish-free) instruction manual, something as straightforward as “Channel Setting” counts as an “Advanced Feature”.

Though the receiver (RX) takes two standard AAAs, the transmitter (TX) is more awkward and runs on a single 23A battery. Fortunately you can switch the transmitter off so that it doesn’t use up power if the test button gets pushed accidentally while in storage or transit. But in future, AAAs in both transmitter and receiver would be appreciated.

The receiver has the same power/mode switch as the transmitter. As you can see from the picture above, it’s a bit cheap and the settings are a bit too close together. The “Off” position is in the middle, and with our units it can be a bit fiddly to make sure the switch is definitely set there. But it’s not a major gripe, and otherwise the triggers feel mostly well-made. 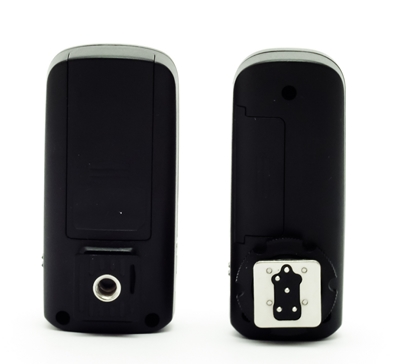 The transmitter has a sturdy metal hotshoe foot. Sadly there is no test button on the receiver for you to check your flash connections. But there is a big colourful button on the transmitter for you to test wireless synchronisation, and for use in wired & wireless shutter release mode. The Nikon model’s button is yellow and the Canon model’s is red.

The receiver has two 2.5mm ports for you to connect your studio flash, speedlight or remote camera by cord. A full set of cables is included in the box. We didn’t get to test the shutter release feature since we didn’t have the right cable for our specific camera. In Flash mode, the system worked flawlessly in all of our shooting. There were no random flashes or misfires. With a Nikon D700, the maximum synchronisation speed is 1/250 second, the highest possible for that camera.

We even handed the Lumox kit to a photography student who had never used off-camera flash before and they were right at home using it. You can’t go far wrong with the Lumox 520 as a basic flash trigger, depending on the price (which we don’t know yet). If you find yourself needing to spend more than around US$80 then you might want the extra features of the Pixel Rook or Phottix Strato IIÂ for the same money.

Retailers, release date and pricing for the Lumox 520 have yet to be publicised. Fottga say they are on the lookout for new distributors in the UK and Europe.