A new Kickstarter campaign has started for ghostLED, a portable location light designed to work as both a flash and as a video lamp.

The ghostLED is described by its developers as a “hybrid” or “2-in-1” device, somewhere between an on-location photography flash and an LED lamp, because it supports both continuous output and a flash mode, thanks to a built-in 3.5mm sync port.

“Lightweight, weatherproof and compatible with most accessories on the market; ghostLED is the ideal flash-companion for anyone who wants to photograph or film their indoor spaces or outdoor adventures,” said Snap Bits, the manufacturer, in a press release.

Both sources of light come from LEDs. We’ve grown wary of LED-based flashes making big claims on crowdfunding web sites, but this one seems to make reasonably grounded claims without trying to change the world.

In effect, it’s a battery-powered lamp with multiple mounting options, including a 1/4″-20 standard tripod thread (×2) and a GoPro-style action camera accessory mount. The shape and size is just about right to fit in a speedlight softbox adapter. The ghostLED weighs 520 grams and is “weatherproof” for outdoor use.

Output is dimmable over a 5-stop power range, with a claimed colour rendering index (CRI) of 90, a beam angle of 120° and a colour temperature of 5600 Kelvin. The battery (whose exact capacity isn’t specified) supposedly gives up to 1,000 full-power flashes on a single charge. 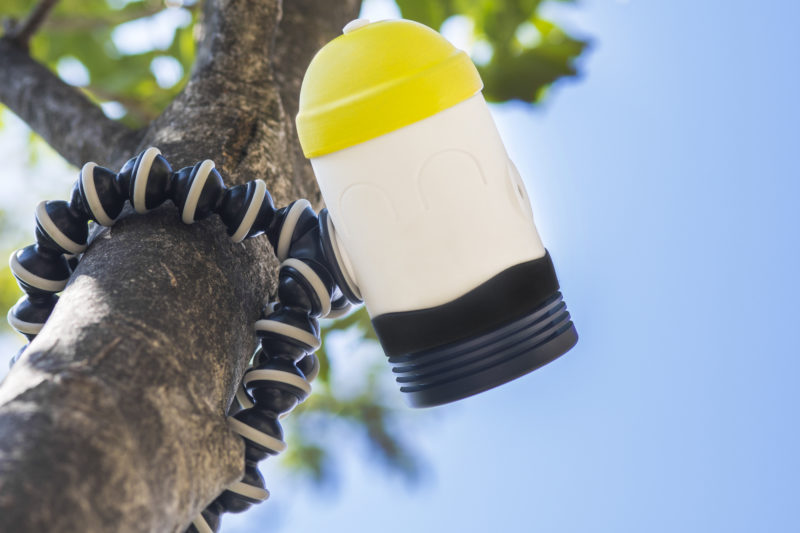 The most dubious claim is of high-speed sync up to 1/2000 second. This is not a feature of the ghostLED at all, but the trigger you choose to plug into it; the campaign shows them using a Yongnuo YN-622, which will grant ‘Super Sync’ with almost any regular flash. Update: Snap-Bits have clarified this point; see the comments below.

Also, the colours are odd and it is shaped a bit like a phallus.