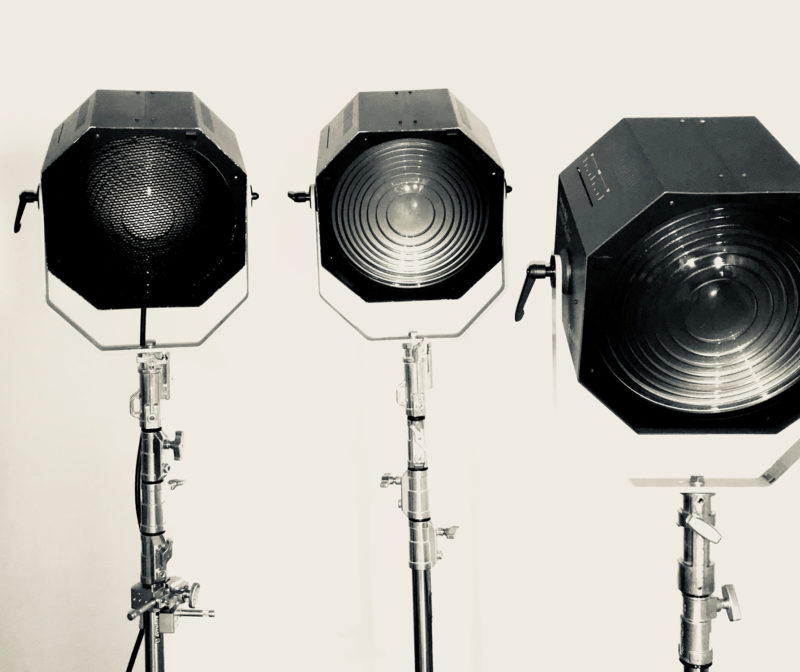 With the emergence of the Fujifilm GFX medium format camera in January of 2017, I became very interested in high-speed flash sync.

Until that time, for most of my work, I used medium format cameras with leaf shutters, that provided sufficiently fast flash sync, up to 1/1600 second, with certain configurations. But flash duration really was always my main concern, and I simply did not worry about needing to sync at any faster shutter speeds.

As I started to explore how High Speed Sync (HSS) and/or Hyper or Hi Sync (HS) could open up new creative possibilities, in conjunction with a medium format mirrorless camera, I looked at all available options, offered by the established companies such as Broncolor, Profoto and Elinchrom. It is important to be very clear that there are basically only two different ways to sync at high shutter speeds: With HS, as used by Broncolor and Elinchrom, a very long flash duration is needed to provide a flash long enough, where a portion of that flash can be efficiently synced up with the shutter at high speeds. With HSS on the other hand (the brands that use this method, such as Profoto, Godox, Jinbei and many speedlites), a rapid sequence of pulsating flashes, creates a very even and reliable solution. While HSS provides a smoother and more even exposure, it can lack the power of a â€˜normalâ€™ flash.

For almost all of my career, I exclusively used Broncolor, and even collaborated with the brand for about 10 years, for many marketing and promotional campaigns, including their launch campaign for the original Para 330, in 1999.

I quickly discovered that I much prefer HSS over HS, as it creates very even exposure, and is just much easier to control.

Since neither Broncolor nor Elinchrom offer HSS functionality, I took a look at Profoto’s line up of HSS capable flashes. Unfortunately, since I do not like heavy monoblock style flashes, the B1X did not appeal to me, and the B2 is simply too weak. That leaves the excellent Pro 10, but since it requires a generator for any outdoor shoots, I also did not find it ideal for most of my current needs when leaving the studio or controlled environment. The best opportunity for HSS occurs pretty much exclusively when shooting outdoors and on location. So unless you want to have a generator truck and additional operators added to your crew, it is just not the best solution.

And that’s when I discovered Godox, and quickly fell in love with their H1200 remote head, powered by two AD600BM units. I absolutely adore the ergonomics of the small and super light remote heads.

The main concern was the fact that Godox does not make a much needed and important diffuser glass dome for the flashtubes of the AD600 and H1200, but I found a company in Hong Kong that makes a third party diffuser glass. They also listened to my suggestions and adapted the glass a bit, to better withstand the small amount of heat produced by the flashtubes. Problem solved.

Modifiers with and without Bowens mounts

At first, it seemed that a system with a Bowens type mount would have endless options for finding great modifiers, however that was not the case, as I found out soon enough. This is further limited by the fact that I generally do not like to use softboxes as key lights. I can easily say that in nearly 25 years, I never shot an image lit by a soft box as a key.

In fact, during all these years, I had narrowed down my favorite key lights: the Broncolor Flooter S, a larger fresnel and the various Broncolor Paras, from 88 to 330.

Initially, I tried to find alternative options, that conveniently are made with Bowens mounts. One of them is the Bowens Fresnel 200.

But despite the excellent diffusion glass added to the my H1200, and some H600 heads, the design of this fresnel, with its built-in iris focusing system, does not produce, at first, the type of even and smooth result I am looking for. But, I finally figured out a remedy, which is to add a layer of LEE diffuser filter 250, cut in a cross shape over the iris. While this reduces the output by about 3/4 of a stop, it totally takes care of any issues with rings and hotspots, and I am now getting a very smooth result.

Still, the Bowens fresnel 200 has a relatively small lens, and can not replace the Broncolor Flooters.

Also, the Broncolor is much more efficient and puts out over 2 stops more power than the small Bowens, without any added diffusion, and in practice nearly 3 stops more- because of the need to add the diffusion over the iris.

This is critical, since being limited to just 1200Ws (and in fact a little less, because of the power loss from the extension head cables we are more likely looking at something like a 1000Ws), is for sure a compromise!

For many years, I used Broncolor 3200Ws packs in conjunction with their twin head, which delivers a whopping 6400ws.

When outdoors, I would shoot often at Iso 50, 1/500 second and f16 and have plenty of power left, also allowing for complete blackout of any sunlight. But this type of production requires a relatively large crew and generators, and is extremely limiting. Any off road spots become difficult to access, when the generator cables have a 100m limit, and the whole process just becomes slow and a bit boring, to be honest.

Therefore, I am much happier to compromise for HSS-capable 1200Ws battery flash that lets me go anywhere and does not require a large crew.

I had also difficulties to find a suitable Bowens adapter mount for my Broncolor Paras. I looked at all available third party options, and none allow to move the flash head into full spotting position, as these adapters are not designed properly for Broncolor.

There was simply no other solution than finding a capable metal shop and make my own Bowens adapters, for both the Flooters and the Paras.

Since the Flooter’s own Broncolor bayonet mounting ring is held together with rivets, not screws, and because of a small reflector on the inside that is held in place by the same rivets, the adaptation became more complicated that one would immediately assume. Also, I could not find any Bowens rings that are sufficiently “low profile” and that do not cover up a large portion of the flash tube. Luckly, the Canadian company Mola http://mola-light.com agreed to customize re-designed rings for me, without the high â€œcollar partâ€ that all the commercially available Bowens rings are made with.

After months and weeks of experimenting, at the end of 2017, I finalized several Flooters and Para adapters with my own custom Bowens mounts, and they work extremely well with the Godox H1200 heads.

I also adapted the Elinchrom Zoom Spot, another stand-out favorite tool. For this, I decided to combine the Phottix Elinchrom to Bowens adapter, and to add the small reflector from the Elinchrom Quadra adapter onto the Phottix. Adding this small reflector is absolutely essential, as it increases the performance of the H1200 with the Zoomspot by close to 1 stop. The reflector is held inside the Phottix adapter with the addition of a simple custom acrylic ring, It is an excellent solution. The Zoomspot provides pure hard light and is now part of my favorite key, as well as special effect lights. 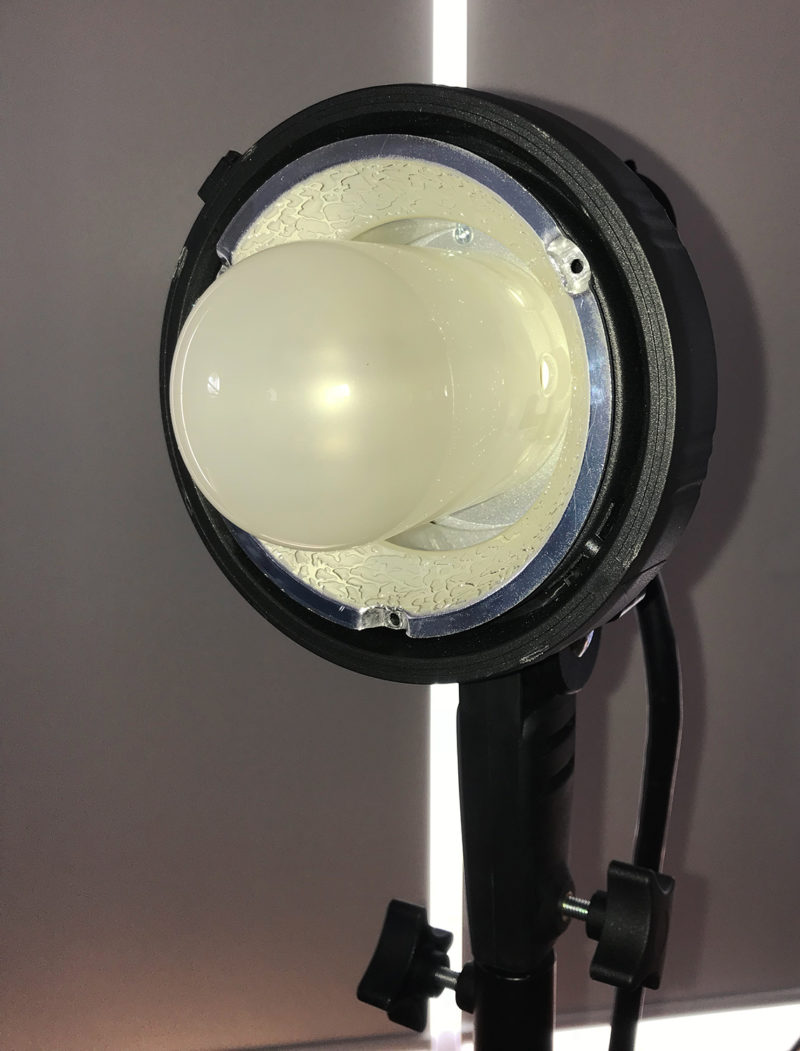 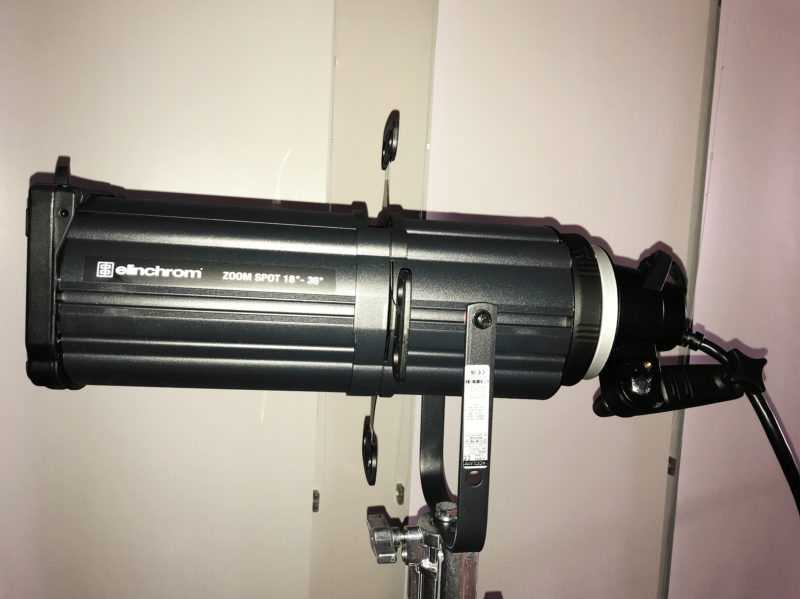 There are, of course, several modifiers that are already made with Bowens mounts, with impressive performances.

To name some examples, various Cheetahstand modifiers, and the Westcott Rapid Box beauty dish are excellent.

The Cheetahstand Colt 45 is a powerful and inexpensive reflector, that is ideal for shooing with HSS in bright daylight.

Since I want to be as mobile and flexible as possible, I like using the RRS brackets, with the Colt, H1200 and 2 AD600 strapped to my belt. This configurations allows my to be very independent and mobile. 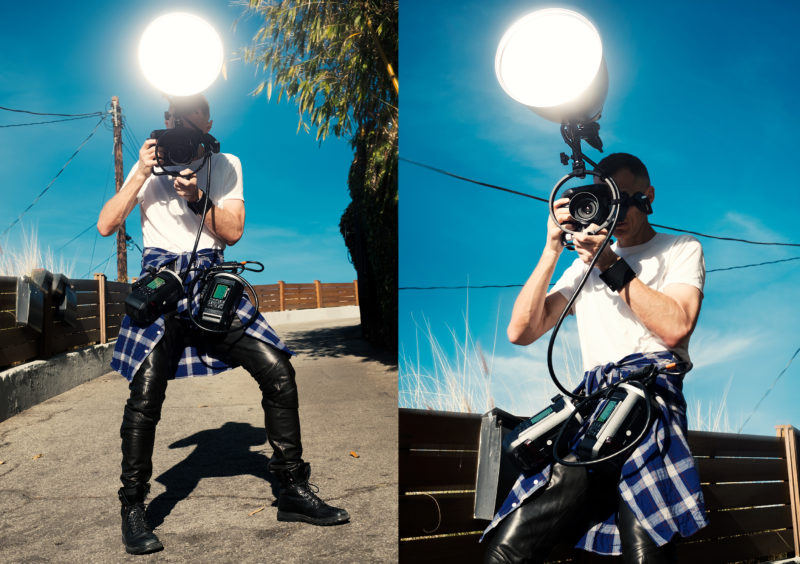 Here, the H1200 really shines! Walking around freely with 1200ws is quite amazing. The small, ultra light head is ideal for on camera use.

Another inexpensive and highly efficient Cheetahstand modifier is their 9×35 strip box. Surprisingly, a few of these strips set up in a tower configuration, provide a similar result
as the Broncolor Lightbars 120, which I used for many years for back and rim lighting.

I also compared the Cheethahstand 9×35 strips with the far more expensive Chimera 9×36 boxes, and found the Cheethastand to outperform the Chimera in every aspect. Coincidentally, Cheetahstand now also launched a low profile Bowens speed ring adapter.

This month, Godox have launched their new AD600 PRO, with an entirely different flash tube, but as of right now, no 1200Ws remote heads are in the line up, only the 600Ws remote head version is already announced. Given the number of pins on the new unit though, one can speculate that a 1200 remote head may be in development.

I look forward to experiment with the PRO next, and will be following up on my findings!