Over the years we have seen various versions of the versatile light stick and with the announcement of the LC500 by Godox we see another version being introduced into the market. The light stick form factor is loved by many photographers and videographers due to the high portability, small shape and quite pleasing light. The long and narrow shape means it is easy to bring and can be setup in small places.

In the 760-gram device we find 516 bi-coloured LEDs which allow you to switch the colour temperature between 3300K and 5600K. Unlike other bi-colour lights, it is not possible to mix the output of the different tempatures since the unit switches the light output to the other side of the device when the colour temperature is switched. With other words, the 258 normal coloured LEDs are located on the front of the unit, and the warmer LEDs are located on the back of the LC500.

At full power the LC500 emits 1200 LUX measured at 1 meter, which is quite a significant amount for such a small little device. Fortunately it is not just quantity, also the quality of the light is good. According to Godox the TLCI is at least 95 and the CRI is over 95. The built-in battery lasts for approximately 60 minutes at full power, but when the mains adapter is plugged in the device can be used continuously.

The LC500 works with Godox’s wireless system, meaning that it is possible to control the power of 6 different group of lights using a single remote. In the standard kit this remote is included, as well as a carrying bag, a charger and a moveable flag. The latter help you to limit the spread of your light.

Compared to competitors, the LC500 is supposed to be more powerful and there are no clip-on filters required in order to change the colour temperature of the light.

Godox has indicated that the LC500 should be available soon and it is priced at 190 dollar. What do you think of this new addition to the Godox line-up A worthwhile addition of should Godox focus their attention to something else? Let us know in the comments! 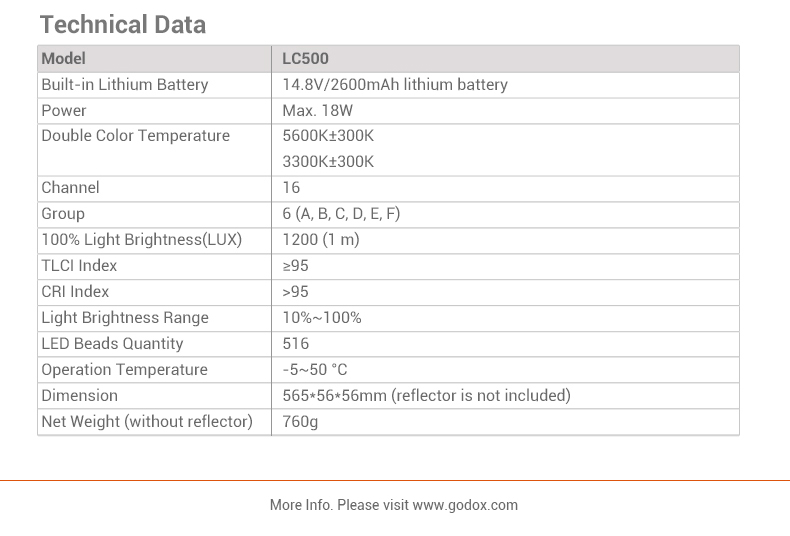