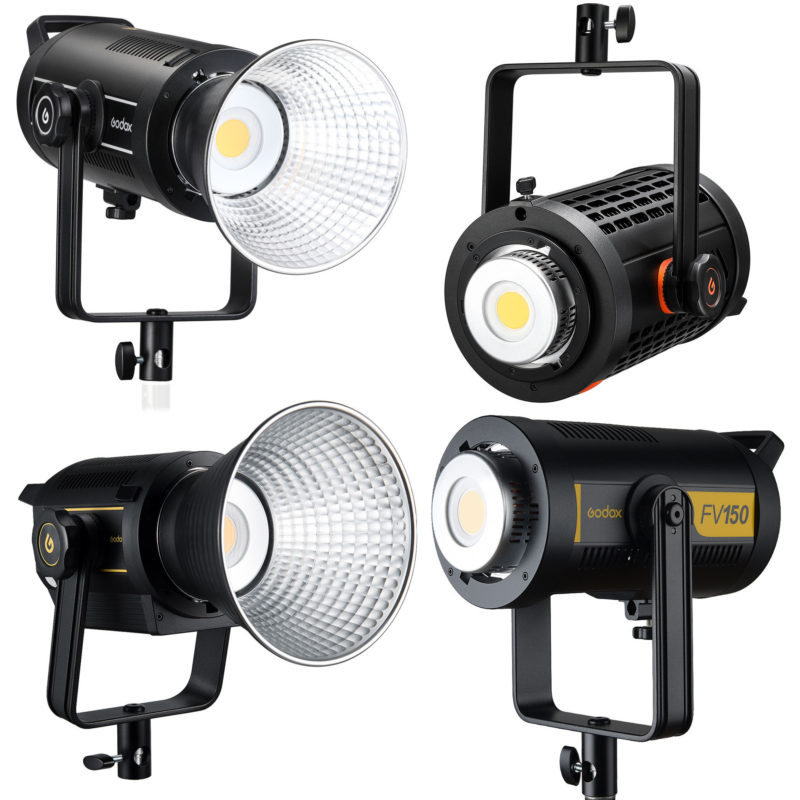 In a previous article we discussed Godox’s latest flash offerings released over the past year or so (while this site was temporarily inactive). Today we will take a look at the continuous lighting that was introduced by Godox in the same period.

Firstly, we see a large number of Bowens S-mount LED lights that have been added to the Godox line-upâ€”four in total. These are the following: SL-series mark II, FV-series, VL-series and UL-series. From these the SL-series are priced the lowest and UL-series the highest.

The S-type bayonets mean all of these lights can be used with a wide range of light shapers (softboxes, reflectors, snoots and fresnels) that use the near-universal Bowens S accessory mount.

All fourâ€”SL II, FV, VL and ULâ€”are available in 150 watt versions, but some are also available in higher power variants, with the VL even being offered in a 300 watt model. If we were to compare the technical specifications of the respective 150 watt versions then it might seem that there are no differences between the four series. All of them have similar power output and identical light quality. It is only when we have a closer look that we can find the small details that make all of these lights unique.

Noise is an important aspect that to distinguish the different LED lights from one another. It might seem obvious, but since the Godox UL series is passively cooled and has no cooling fan, it is the quietest. However, this also means that the UL light is bigger than its peers since it requires a large heat sink. The SL-II and the VL series can be also run with their fans switched off, but only at lower power outputs.

There is one additional feature in the FV-series lights that could be interesting for stills photography. These lights can ‘flash’, meaning that they can increase their output by 2 stops for a short duration. This works in high-speed sync mode via the Godox X-series flash triggers.

If all that was a bit confusing, here is a quick comparison of the high-level features.

Alongside these large Bowens-mount lights, Godox has introduced some smaller lights with a different form factor. Namely, the ML60, S30 and the FL-series. The ML60 is a compact 60-watt light featuring a Godox-mount, which we already recently discussed on Lighting Rumours.

The S30 is a focusable 30 watt light that can adjust its beam angle from 6 degrees to 55 degrees using the aspheric lens. It can also be run from battery power, although doing so limits the power output to 10 watts. At 907 grams it is also compact and portable making it suited for videographers working on location.

Godox is now also making a flexible light, of the kind we already have seen from several other manufacturers. The FL-series is a bi-colour lightweight and portable LED mat, which is available in four different versions. These versions have different dimensions and different power consumptions, ranging from 60 watts to 150 watts.

The Godox LF308 is a matrix LED panel designed for on-camera use. It has a similar flashing mode to the FV-series, so you can use it for stills photography as well as video. The LF308 also has Bluetooth built in, so you can control it from a smartphone without necessarily using an X2 trigger as a signal relay. It runs on AC power or Sony NP-F style batteries.

Like many other brands Godox is also dipping their toes into the RGB lights. The M1 is a small RGB light that fits in your project with 13 watts of power. It features three different modes: RGB, CCT and special effects.

The other creative light that Godox added to their line-up is the LC500R, a variant of the already earlier available LC500. The R variant of the LC500 has an additional RGB mode and also a special effects mode.

There are also some other noteworthy products that Godox announced. Similar to Profoto, Godox introduced a small round RGB LED light, the R1, aimed at smartphone users. Unlike the Profoto C1, the R1 doesn’t have any flash mode and can only be used in continuous mode. A ‘flashable’ RF1 model was announced alongside it, but has not been released.

(Someone has pointed out to us that Godox R1 was actually announced before the Profoto C1, so is not quite a C1 clone.)

The last product that we would like to mention is the SA-17, a Bowens Mount to Project Attachment adapter. With this adapter it is possible to use the SA-P project attachment which allows you to shape light with a lens, but also to use gobos, iris, scrims, and other accessories.

What do you think of all these new LED lights from Godox? Now that we have covered all of the new releases by Godox are there any other brands that we should discuss on Lighting Rumours? Let us know in the comments!