Godox has a whole slew of LED lighting options available and there is plenty of competition in the market, to boot. At the same time, they have released a series of flashes with their proprietary Godox mount, pitched as a more compact alternative to the more common Bowens S-fit bayonet. The ML60 is a Godox-mount, 60-watt daylight balanced LED that can run on mains or battery power.

Godox were kind enough to send me a copy of the the new ML60, bundled with their Godox-mount folding softbox, the AD-S60S. Is it any good?

There are two digital dials, which control power and access all the menus. The power button is a separate button on the back of the unit. Everything is pretty intuitive and the ML60 even came with a wireless remote, so you can control power from afar. For one light setups I never actually found cause to use this, but it would be handy working on location or with multiple lights. 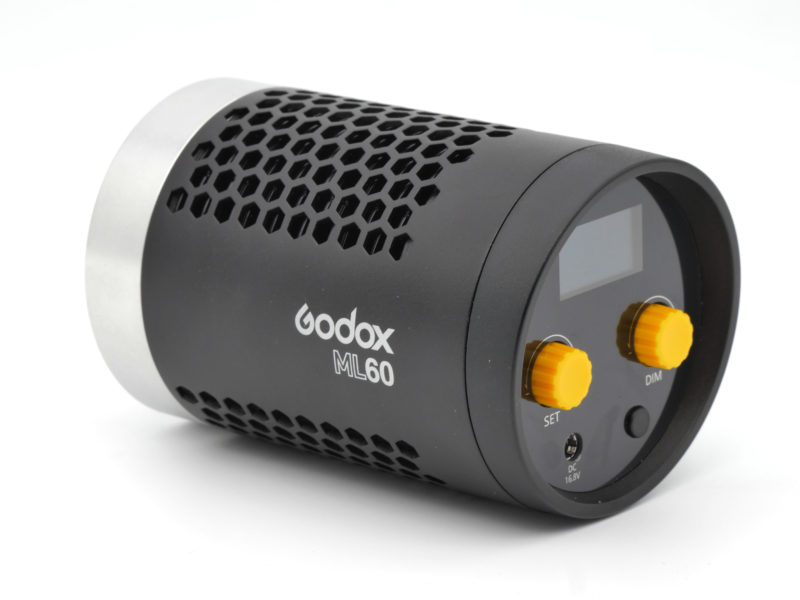 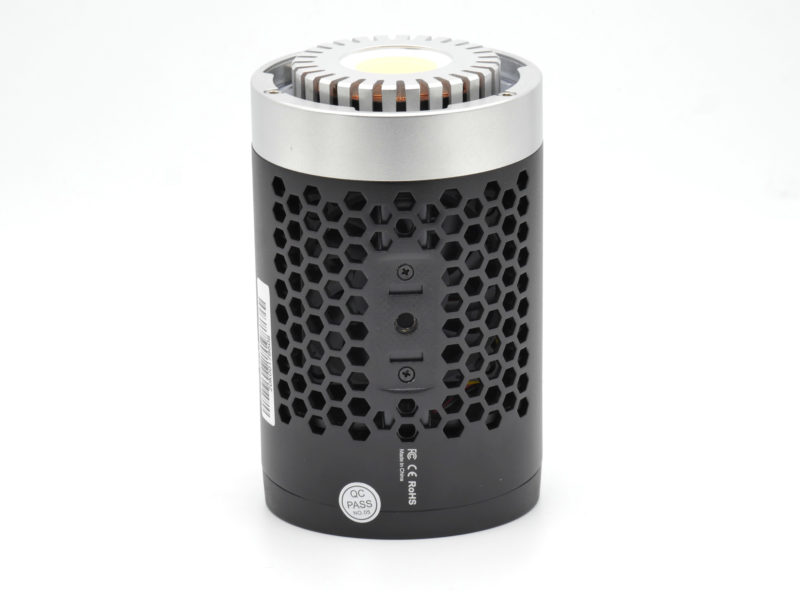 The unit itself is made of aluminium, and comes with a plastic protective cap for the LED chip. Like the AD100 and AD200, the Godox ML60 has a removable tilt bracket: with it removed the whole thing is about the size of a fat lens, making it easy to fit in a standard camera bag. In fact, the ML60 comes with a semi-rigid padded shoulder bag to store it and its accessories (cables, power adapter and so on). If your photography kit is fairly minimal (say a mirrorless camera and 1â€“2 lenses) then there’s room enough to use this as your main camera bag.

Everything feel sturdy and built to last. The rear screen is sufficiently recessed that you aren’t likely to crack it if you accidentally drop or bash the light against something. The only thing to watch out for is, it being cylindrical, the whole device rolling off your desk when not plugged in or mounted to anything. The light stand bracket is plastic and has hooks on it from which you can hang the NPF battery adapter, if you are using it.

The Godox ML60 has the proprietary Godox accessory mount, which is smaller than a more common Bowens S-type fitting. The difference in form factor should not be understated: this makes a huge difference to how easily the ML60 (and other Godox-mount lights) fit into your camera bag and work as a portable kit, compared to the equivalent Bowens mount studio lights or using a Godox S2 adapter.

The mount itself works just like the Bowens S-type: three lugs, with spring-loaded sliding release tab on the unit. Just the scale and shape of the lugs is different.

If you do want to use Bowens-fit accessories (or Ezybox-style folding softboxes instead) you’ll need the newer Godox S2 adapter, into which the ML60 is designed to fit perfectly (after removing the flat insert from the bottom of the S2 aperture). An advantage of this over a direct-mount softbox is that you can slide the light back and forth in the adapter, effectively changing the beam of light within the softbox or reflector, which could be useful in some scenarios. 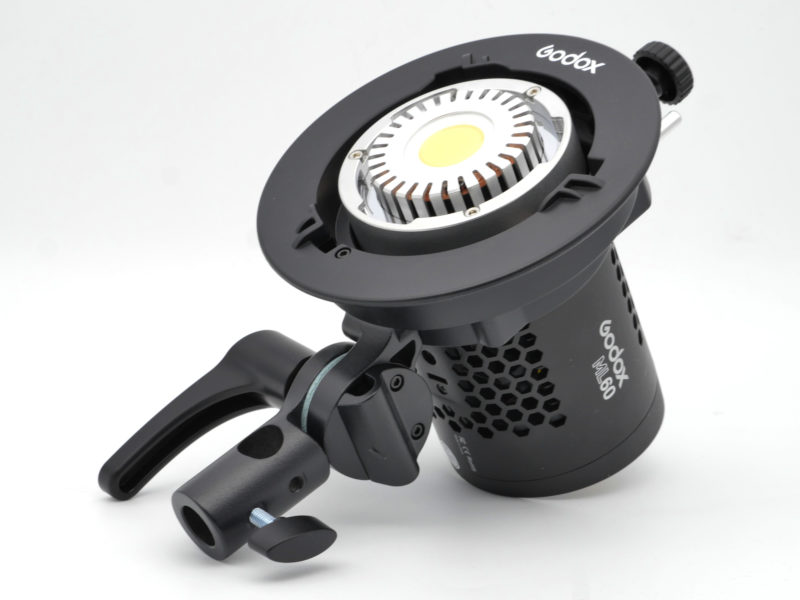 I compared the AD-S60S softbox with a near equivalent: a Flashpoint Glow softbox with the Godox S2 adapter. The Godox-mount solution is considerably simpler and packs down much smaller. It seems much more feasible to carry the AD-S60S even if I don’t plan to use it, because it can fit down one side of my camera bag.

The AD-S60S is also impressively versatile: a zip in the side of the canopy lets you use it like an Apollo-style umbrella softbox. It comes with fabric deflector discs in white, silver and gold, an outer diffusion panel and a fabric grid, as well as a soft carrying case that holds it all together.

In the image below, it’s easy to see, for an equivalent-sized softbox (the AD-S60S vs Flashpoint Glow), the switch from a Bowens mount to a Godox mount considerably reduces the bulk of the setup as a whole. Even with the fairly oversized tilt bracket that comes with the ML60, it’s easy to slip everything into sections or down the edges of a camera bag or suitcase. By comparison, the Glow softbox and S2 adapter, though similar in length, have an awkward perpendicular speedring to deal with, sure to take up the lion’s share of space in any padded backpack.

The Godox AD-S60S softbox is acceptable quality. It doesn’t feel super premium: the fabric is a bit nylon-y (rather than soft-touch, as in some more expensive modifiers), but the umbrella opening mechanism is heavy duty and the stitching is fine. The look of the light is highly customisable thanks to the different deflector discs, layers of diffusion and included fabric grid, all of which attach via hook-and-loop fasteners, so you can choose whether you want an evenly illuminated surface or something with more falloff.

Once the softbox is set up, you can collapse it without having to remove any of the diffusion, which saves a fair bit of time and hassle. With the Godox mount being so small, you do need to rip open a corner (or undo the side zip) to get at the mechanism during setup â€” even my small hands can’t fit through the metal speedring, but this only takes a couple of seconds. All in all, it’s a convenient tool to use. It might not fold quite as flat as SMDV’s new ‘Flip’ series softboxes, but it’s pretty compact.

This is not a bi-colour light, meaning the only adjustment on the unit relevant to stills photography is overall brightness. To adjust the colour temperature you’ll want to attach gels somehow. If you’re a video shooter, there are some special effects modes you can take advantage of: including lightning (3 separate modes), paparazzi (another 3 modes), TV, and flickering light bulb.

At 60 watts, most ‘serious’ photographers might avoid a light like this, since it’s not really bright enough to make much of a difference in daylight as a point source, let alone diffused through a softbox. However, for web output, shooting headshots indoors or at night, it’s just about enough for modern cameras. Moreover, a continuous light is useful as a teaching tool, or for use with mobile phone cameras (if you don’t fancy holding out for the sophisticated smartphone flash triggering systems).

Output at full power, at one metre, from the bare head was measured at f/2.8 at 1/200 second, Iso-200 with a Sekonic L-358 exposure meter. The included standard reflector boosts that by over two stops to f/6.3. With the softbox using two layers of diffusion, it metred f/2.2. If you are used to creating ultra crisp, noise-free images with flash, then this light may not be enough, except at wide apertures or slightly higher Iso sensitivity. But most people shooting for web work or small prints can get away with a higher Iso, slower shutter speed and slightly wider aperture, if the conditions allow. The main disadvantage will be for competing with other ambient light sources (especially during the day) in which case flash reigns supreme.

I don’t have a colour meter so can’t tell you the colour rendering quality of this light, but to the untrained eye it seems pretty good, and well balanced enough to work with the ‘daylight’ white balance on my camera.

Fan noise is one of the key selling points of the ML60. The fan, when enabled, is extremely quiet, and it can be disabled at lower power settings, meaning you are less likely to distract your subjects or ruin live audio. It is far, far quieter than the fan in the Interfit Badger Beam, which is impressive given that the ML60 is a much smaller light, so presumably has less space for heatsinks. If this was your main interest in this light then it’s worth also noting that Godox has brought out the UL60, a mains-powered silent-running video lamp with a Bowens mount.

Also on the video front, I noted no flickering during any of my continuous light testing. If you wanted to create a manual dimming effect during live video recording, then note the output control isn’t really stepless: rather it’s 100 discrete power levels. Turn the dial and it will respond instantaneously but you might notice the ‘step-like’ changes over a range of power levels. However if you click the power dial in and then turn it, it moves in 10% rather than 1% increments, meaning you can very quickly get from minimum to maximum power and back again, without having to turn the whole unit off.

The ML60 comes with a battery plate that works with two Sony NPF-type lithium camcorder batteries. These aren’t included, so if you don’t already have any, out of the box you’ll be using the universal-voltage AC adapter. NPF batteries are a de-facto standard in the industry, so using these – rather than a proprietary battery specific to the ML60 – helps future-proof the light, as well as making it easier to source replacement batteries even when far from a Godox dealer. I didn’t test the battery capability for this article.

Initially I was skeptical about the merits of the proprietary Godox mount, but from trying out this light with the accompanying softbox, I am impressed. I think, if you are in the market for a portable, low-powered continuous lamp â€” as an on-the-go light source, as an additional studio light or as an entry level option â€” you can’t go far wrong with the ML60.

At the time of writing, Godox prices the ML60 at around Â£250, which as an entry-level option is Â£50 more expensive than the Interfit Badger Beam and unlike that light does not come with a battery. However, the ML60 is quieter (key for video shooters) and much smaller and lighter, which should appeal to shooters working on location or with limited storage space.

A closer competitor would be the Nanguang Nanlite Forza 60, which has a similar form factor to the ML60 and is also cheaper at around Â£200. The range of modifiers for the Forza 60 is modest, however, comprising a reflector, a fresnel, a softbox and a Bowens adapter, and there are no other lights that use its proprietary mount. By contrast, the Godox AD300Pro and AD400Pro flashes use the same mount, so there are more Godox-mount accessories available at reasonable prices, both from Godox and from third-party manufacturers.

If you are a photographer starting to accumulate Godox-mount accessories, and are shooting small videos then the ML60 is definitely worth a look. It’s also worth considering for anybody who’d otherwise be in the market for a Forza 60: video shooters wanting a portable but accessorisable setup.

My testing was somewhat limited due to social distancing restrictions. If there’s something you’d like to see clarified or covered in greater detail, leave a comment below.

Thanks to Godox for providing free samples to review.