The module fits into the back of the exposure meter, enabling remote triggering and power adjustment of Godox’s flashes. You will also be able to measure exposure in high-speed sync (HSS) mode, which is not normally possible due to the rapid sequence of flashes that HSS involves.

Other benefits include the ability to measure the relative ratio of ambient to flash illumination in a scene. Compatibility also extends to equivalent rebranded Godox lights, such as Adorama’s Flashpoint line.

Development of the RT-GX has been public knowledge for a while now, but we got a first glimpse of a prototype (not that it is much to look at) in an FCC filing published last week. 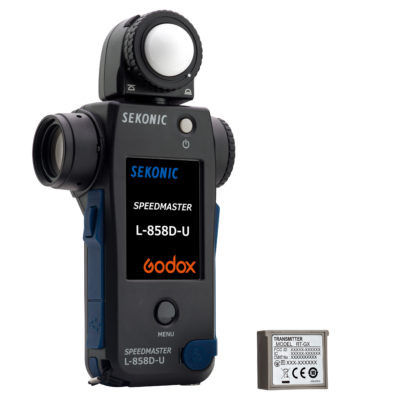 The only thing we’re not quite sure about is how well Sekonic’s light meters will cope with hybrid LED HSS flashes such as the Godox FV150.

“Together with Godox, we are proud to announce the Sekonic RT-GX transmitter module for the Sekonic L-858D (International) and L-858D-U (USA) Light Meters. This collaboration brings a fully integrated light metering workflow to Godox users, making it possible for them to measure effortlessly, control, and analyze the characteristics of flash like never before.”

According to Sekonic’s US distributor, the Sekonic RT-GX will be available in November 2020. A price was not specified.