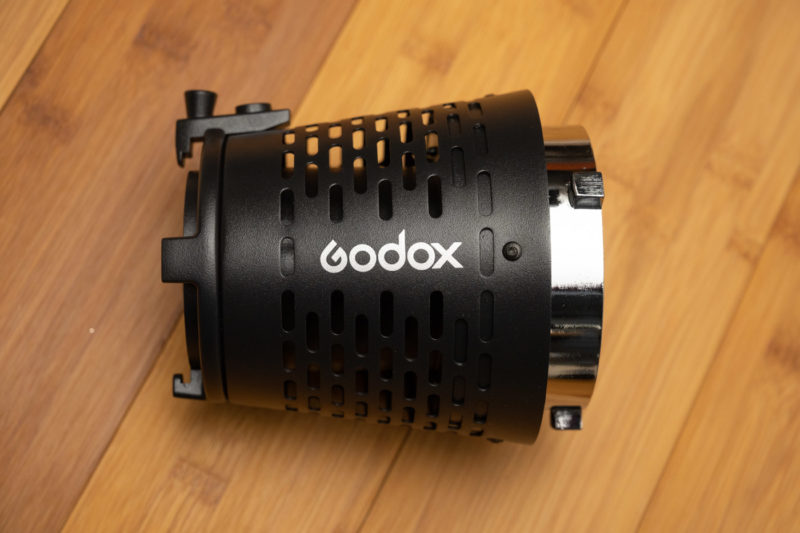 When Godox announced they were releasing an Bowens adapter for the SA-P projection attachment, I was quite excited, since I have been looking for a high-quality gobo projector.

However, my excitement didn’t last very long, once Godox stated that the SA-17 was only compatible with their (Bowens-mount) LED lights. I wanted to use it with studio flashes, so for my intended purpose officially the adapter was not suitable. But since Godox didn’t give an explicit reason, I began to wonder why. As stubborn as I sometimes am, I could not rest until I knew why Godox didn’t allow the SA-17 to be used with strobes. I had to understand, so I bought one myself.

Can or can you not use the SA-17 with strobes?

For those that are not familiar with these products, here is a short recap. The SA-P is a gobo projector designed for the Godox S30. It received quite some praise since the optical quality is good while the price is still very reasonble, as has been the case for many other products that Godox has been releasing recently. Since the SA-P was originally designed to be used with the S30 it could not be used with other lights. The SA-17 changes this, it is a adapter that goes between a light with Bowens mount and the SA-P projector.

On Godox’s official website, it is stated that this product should only be used with Bowens-mount LED lights. Also on other websites we see that Godox only lists compatibility with continuous lights, a version for strobes “will be taken into consideration” . There are even some retailers that state that the hybrid LED strobe FV150/FV200 should not be used in flash mode, solely in continuous mode.

In the rest of the article we are going to ignore this official statement, but please be careful. Ignoring manufacturer recommendations is not something we advise at LightingRumours since it potentially can harm you and your equipment (and at the very least void your warranty).

The first impressions after unboxing the SA-17 were hopeful. As you can see on the photos inside the adapter we find a hollow reflective tube with frosted glass at one end. My assumption is that Godox included the frosted glass to make the light source more uniform and therefore get a more uniform projection result. Be aware that the frosted glass is going to impact the overall efficiency of the projector. A 30 watt Bowens LED light is going to give dimmer results than when the SA-P attachment is directly used on the S30 light. 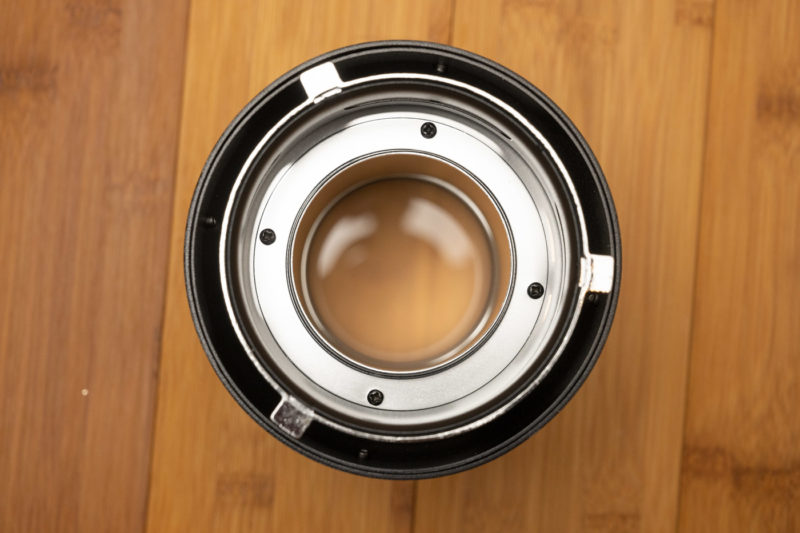 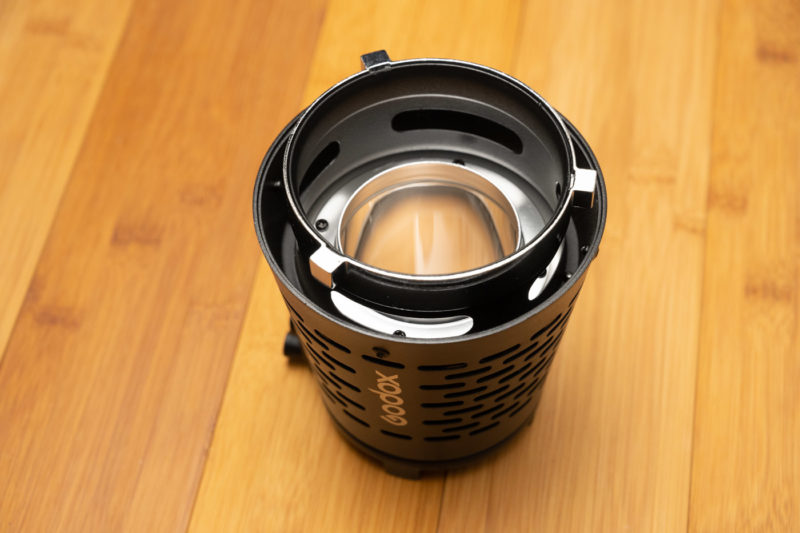 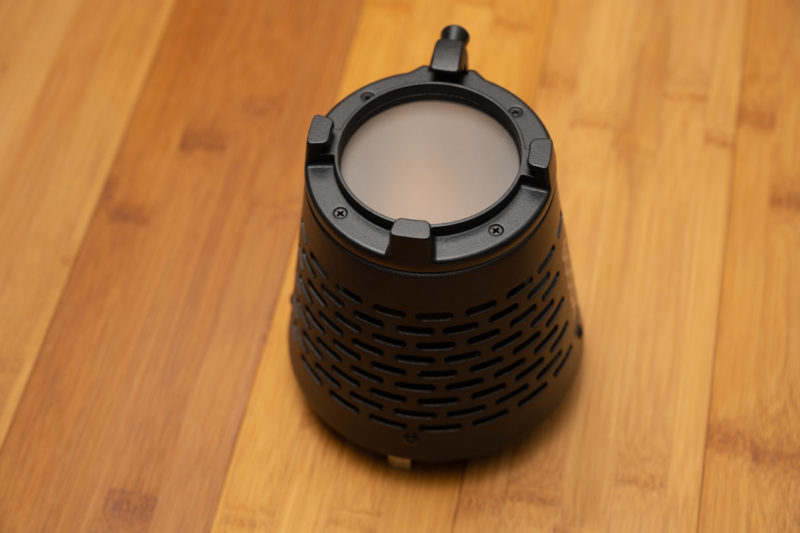 When trying to mount the adapter on some strobes the first limitation becomes apparent. This is the physical space available within the adapter: not all flashtubes fit within the hollow tube. The AD600 Pro and AD1200 Pro have quite a big glass dome on the front and this prevents the SA-17 from mounting on these strobes. Since the AD200, AD300, AD400 (with Bowens adapter) and regular AD600 use smaller flashtubes they do fit (for the AD200/AD300 I tested it with the AD-S2 bracket).

After firing some test shots with the SA-17 attached to the AD600 I also notice that the resulting light pattern created by the SA-P is good. 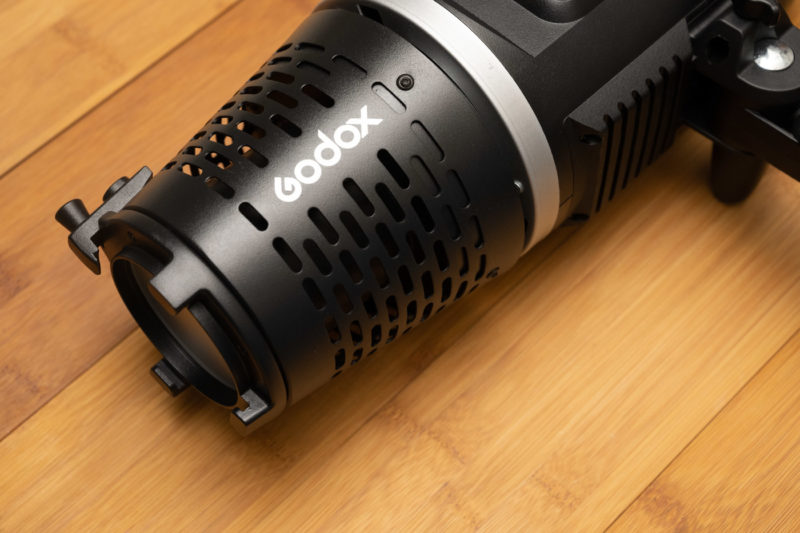 When I remove the SA-17 adapter I realize one thing. The flashbulb is encased by the hollow tube without any possibility for air circulation. While for a couple of shots this might not be a significant problem, I can certainly imagine that for more shots it is going to get very warm inside there.

Heat can be a big problem for flashtubes. They break if they get too hot. While most (if not all) strobes from Godox have overheating protection, this temperature is not measured on the flashtube itself. The sensor is located inside the body of the flash and would not detect if there is no air circulation around the flash tube.

For LED lights, the limited airflow is not a problem, since LED lights are cooled from the back of the chip, not from the front. Personally I do not know how easily an AD600, for instance, would start to overheat. But I can imagine after repeated full power dump it will get pretty hot in the adapter.

Although Godox doesn’t list it as compatible, the SA-17 can be used with some strobes, not all, and get pleasing results. That said, while the adapter might physically fit for some strobes, there are some other considerations that have to be taken into account. The SA-17 blocks air circulation and this can potentially lead to an overheating flash tube. I think with this realization we understand why Godox only list Bowens LED lights as compatible. Godox do not want to take any risk and be responsible for people who overheat their flashtubes.