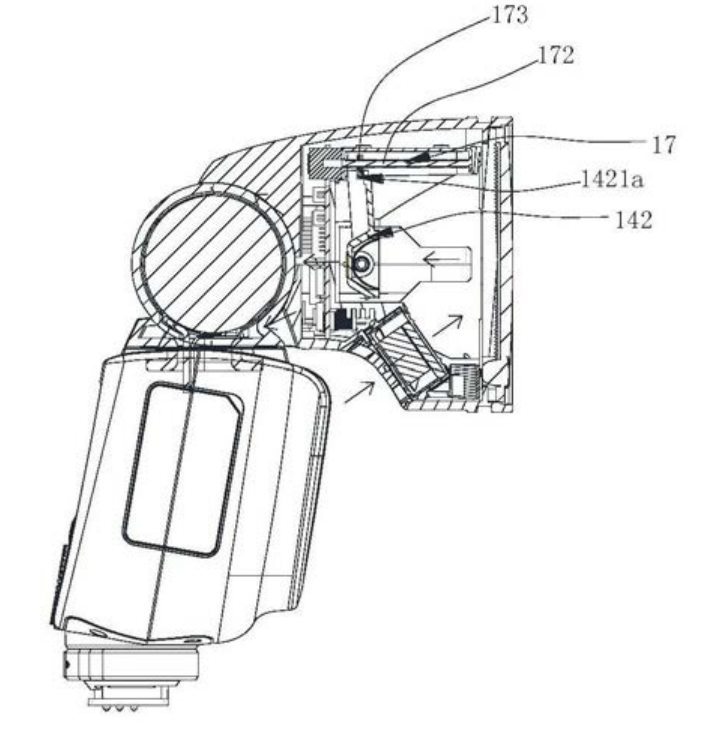 Chinese manufacturer Godox is working on a sequel to its V1 lithium-powered round-head speedlight.

The successor, called the Godox V1pro (or V1 Pro), will have a similar circular zoom head, designed to give a more pleasing light pattern compared to rectangular flashguns, and able to mount colour filters and accessories magnetically.

The key change will be an active cooling fan, built into the head, to mitigate overheating during long or intense photoshoots. The original V1, which is not actively cooled, faced criticism for its overheating protection, which originally caused the flash to cut out after a rapid series of shots, forcing photographers to wait for the unit to cool down before resuming operation. A firmware update changed this behaviour so that it just slowed down the recycle time as the device warmed up.

A cooling fan should allow users to keep shooting for longer while maintaining rapid flash recycle times, at the possible cost of fan noise. According to patent diagrams, the fan will draw cool air in through the bottom of the head, under the “chin” of the fresnel and onto the flash tube.

It’s not the only fan-cooled hotshoe flash of late. Canon’s top-of-the-line Speedlite EL-1 is also actively cooled. If you don’t plan to use the V1pro on-camera, you might also consider the new AD100Pro, which has the same shape head, and a cooling fan, but no hotshoe foot.

The Godox V1pro has not been officially announced nor details confirmed yet, but the company registered a trademark for “V1pro” and published a patent showing how the cooling mechanism is intended to work. We do not know when it will actually launch, or what the price will be. The existing V1, also known as the Flashpoint Zoom Li-on X, is priced $259, available from Adorama, Amazon and other sellers.

Would you buy a fan-cooled round-head flash?