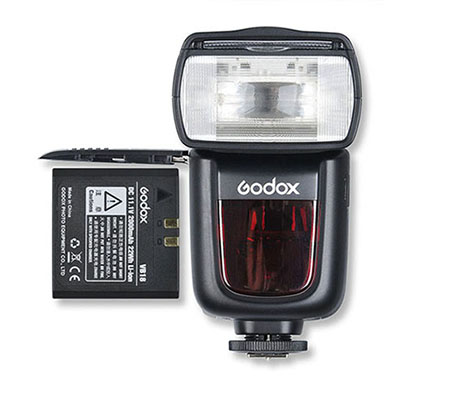 Godox has announced an innovative new flash that could spell the end of external power packs.

The first in Godox’s Ving series, from the outside the V850 looks much like any other flashgun. But while shoe-mount flashes are invariably powered by AAs, the V850 instead takes a removable lithium battery, like your camera.

What’s the benefit? According to Godox, the V850’s 11.1V 2000mAh lithium-ion battery has greater capacity than 12 AAs, making cumbersome external power packs effectively redundant. It will provide quick, 1.5-second recycle times with up to 650 full-power flashes per charge. So for extended studio or location photo-shoots, photographers won’t need to cart around dozens of AA batteries to keep their speedlights running for longer.

From my own experience with lithium-fuelled studio flashes, as the battery depletes, the shot-to-shot recycle time does not get longer as it does with AAs. Instead the flash would just keep going at top performance until the charge was so low that it would simply turn off. Whether the Ving flash will behave this way remains to be seen, however.

The Ving V850 is also compatible with Godox’s 433MHz triggering system (Ã  la Witstro), so you can trigger and control it using the FT-16 radios and get high-speed synchronisation via the Cells II transmitter.

No word on pricing or release date yet. The Ving-series’ success depends on easy access to replacement lithium batteries, so hopefully Godox will opt for a standard size or else sell them cheaply.

Can you see yourself adding one of these to your camera bag? Are AAs old hat? Share your thoughts below.