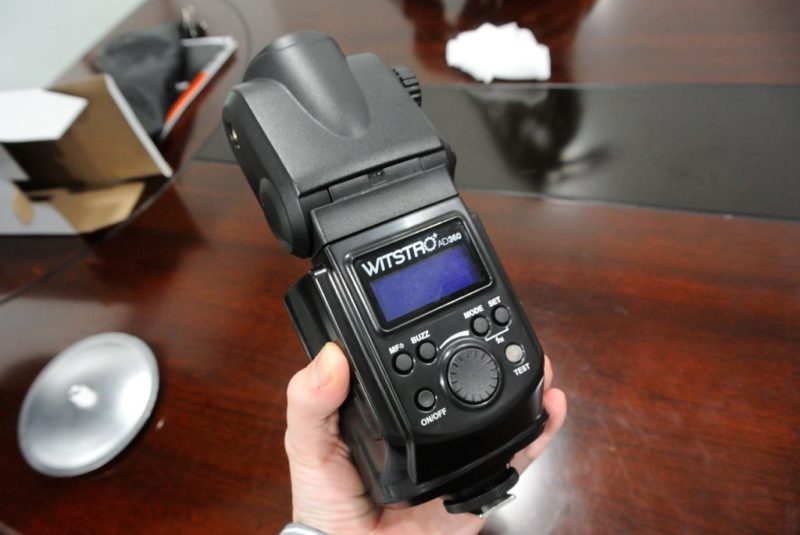 Shenzhen-based lighting manufacturer Godox just announced a pair of new bare-bulb battery flashguns called the Witstro AD180 and AD360 and have been kind enough to give us a sample kit to play with. We will be giving the system the full review treatment over the next few weeks, but for now here is a quick taster with our first impressions. In the meantime, if you have any specific questions you’d like to see answered in the final article, be sure to let us know in the comments section.

Unlike the ubiquitous SB-900 and 580EX II clones flooding the flashgun marketplace recently, the Godox Witstro has not just been cooked up in somebody else’s mould. Being a bare-bulb flash, rather than the more common sealed fresnel lens design, the product people would immediately try to compare it with would be Quantum Instruments‘ Qflash series, but the two really only bear a passing resemblance.

There are two models in the Godox line-up: the AD180 with a “true Watt-seconds” rating ofÂ 153.4 Ws (J) and the AD360 with double that. For comparison, the Quantum QFT5d-R is billed as a flash with 150J of “bounce power” and a source tells us its “true” rating is 137J but we have not independently verified this. In any case, on paper they’re broadly similar and we expect reflectors and accessories to be more influential on differences in light output.

At the Godox factory, during our meeting with company boss Eugene Zeng, I had a quick play with a prototype of the higher-powered AD360. The one pictured below has a slightly different plastic finish to the final production version, but otherwise it is the same. Believe me: it is hefty!Â My hands are quite small but, even so, it is still noticeable how seriously meaty the AD360 is for something that has an unassuming hotshoe mount on the bottom.

At first you might think it is a no-brainer to get the more powerful Witstro unit, but it is important to consider the extra weight and think carefully about whether you would want to have this sitting on top of your camera. Don’t forget that there are no batteries inside the Witstro and you still have to plug it into an external battery pack. 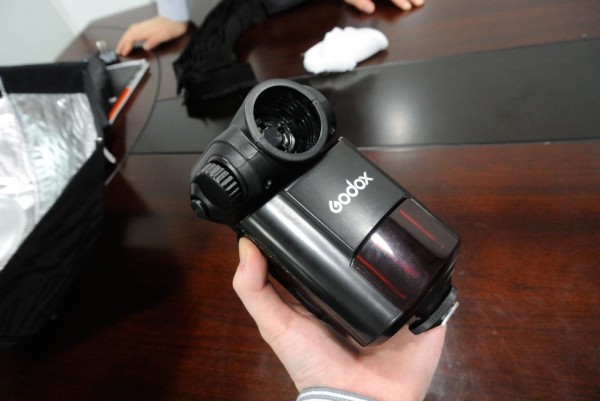 The picture above shows the AD360Â sans flash tube. The small “Push” button above my thumb will unlock the flash head so that you can adjust its orientation, from pointing 90Â° upwards to straight-on, plus -15Â° downwards. At the same time it can swivel 180Â° to the left and 135Â° to the right. The locking wheel in front of that is to tighten around accessories when they are attached. On the opposite side of the head (see below) a tapped 1/4″ screw socket is where you fit the specially designed Godox umbrella mount that comes in the box â€” so no umbrella bracket is needed and you can be sure the Witstro will be pointing right into the middle of your brolly. 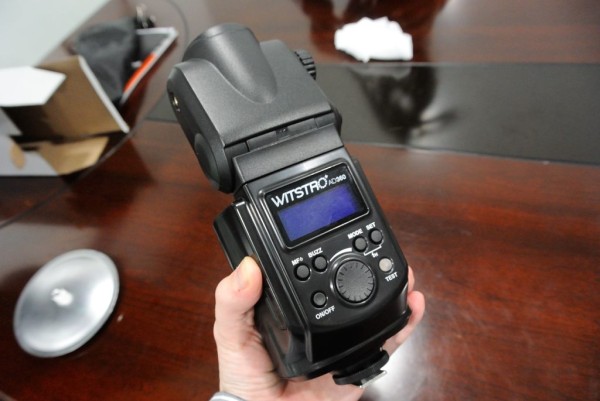 What’s the point in having a bare flash tube, anyway? Why not just get a normal Nikon or Canon speedlight? The main advantage of flashes like the Witstro is the range of different accessories you can fit to it. At the same time as launching the flashguns, we will see Godox bring out two different reflectors (a standard one, which can fit a grid or diffuser, and one for umbrellas), two snoots (a straight one and a conical one) with honeycomb grids, a large beauty dish (plus honeycomb grid) and a collapsible softbox–cum-beauty dish (with a fabric grid) and the aforementioned umbrella mount. 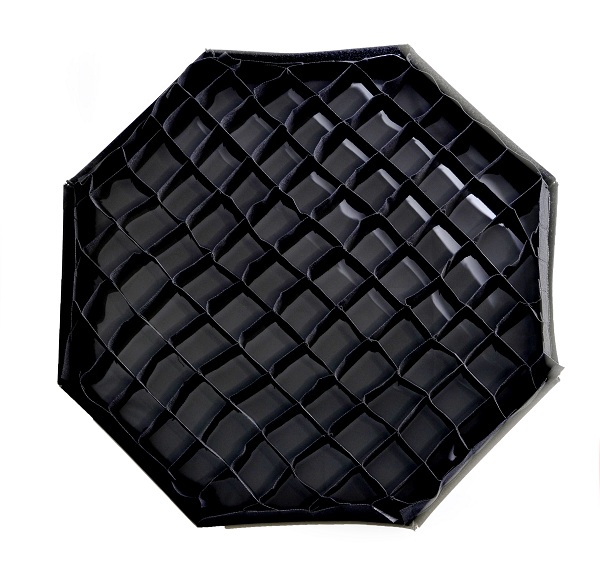 Here is what the folding softbox looks like when attached to the Witstro. Mounting it is extremely painless compared to the fiddly brackets, dodgy mounts, elastic or Velcro you need for most large speedlight accessories. Just slot it in and tighten the knob and it’s on. The softbox opens up like an umbrella and the fabric diffusion panel is held on by Velcro.

But if you want a more fashion/beauty kind of lighting effect, then Godox reckons this modifier can hold its own as a beauty dish too. Whip off the diffuser and screw in a little deflector panel etÂ voilÃ : a makeshift silver beauty dish that can fold up for transport and storage. If you are a bit more finicky about the smoothness of your dishes then there will be a “proper” metal beauty dish too, though that does not fold up so think about what feature matters most to your style of photography.

While you can sit the Godox Witstro on top of your camera, the possibilities for creativity really open up when you take it off the hotshoe. But it needn’t cost you time walking back and forth to adjust the settings. The Godox FT-16 (below) is a 433MHz wireless transmitter with which you can adjust flash power on the fly. What’s more, you can control several different flashes at once with it, including nearly all of Godox’s new big mains-powered studio lights.

Usage is pretty straightforward: pick a frequency channel using the Dip switches, then turn the dial to the group you want to adjust, and change the settings using the buttons and small LCD. When taking photographs or pressing the Test button, the group does not matter because the FT-16 will trigger all the flashes on the same channel, regardless of their groups. You can choose whether power is displayed as relative fractions (1/1, 1/2, 1/4 etc.) or as European-style absolute values (8.0, 7.0, 6.0 etc.).

The receiver unit is surprisingly neat, with no batteries required and a standard full-sized USB connector that folds away when not attached to anything. As far as we can see, none of Godox’s lights have the receiver capabilities built-in so you need to plug one of these little dongles into every light â€” including the Witstro series.

Below is our copy of the Witstro AD180. The front is less bulbous than the AD360, with the little red windows laid out differently. What is behind them? Despite the symmetry, the autofocus-assist lamp lives behind one window and the slave sensor behind the other. To activate the lamp you need to press the MF* button on the flash control panel, or the Lamp button on your wireless transmitter. It is not automatic, like on a TTL speedlight, but you can switch it on whenever you like and it does not switch off again for some time until you tell it to do so, letting you take your time to focus and compose your photograph.

The battery pack, the Godox PB960, is just like the Propac PB820 we have reviewed before, but it has two sockets instead of one, more secure connections and the battery cartridge has a quick release so you can switch in a fresh one without unplugging your lights. It also means you can pick a larger capacity (taller) or smaller capacity (shorter) battery to suit your needs without changing the pack’s footprint. 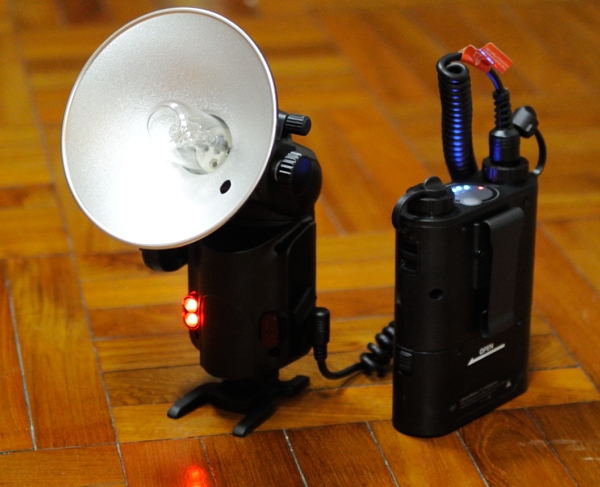 There is no Godox branding on our AD180, because this one is destined for the US market under a different name. So yes, this product will be coming to America and the proposed retail price, which we were told in confidence, sounds very reasonable indeed.Â For now we cannot tell you who will sell it, but hopefully details of pricing and availability will be publicly released soon. We are less certain of details for UK distribution, so you might not want to hold your breath on that front.

So far, impressions are good. Everything is very solid feeling, seemingly well-designed and intuitive to use. Stick around for the full review where we’ll see how the Witstro holds up in practice. Is this the location light you have been waiting for, or do speedlights do the job for you? Share your opinion in the comments and let us know what you’d like to see covered in the full review.