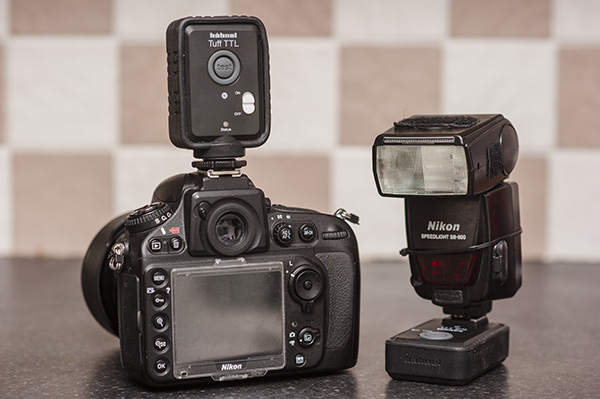 HÃ¤hnel have recently released the Nikon variant of their Tuff TTL trigger. The pack comes with one transmitter and one receiver, batteries to power them, and both surrounded by a silicone case to live up to their “Tuff” moniker.

Apart from a little bit of fiddling needed to get the cases off, the batteries in and then the cases replaced, there isn’t much to the set. Both have on/off switches, LED lights to let you know that you were successful with turning them on, test buttons, and a micro-USB port which can be used for power or for any future firmware updates.

Testing with a Nikon D800 and a D700, I had an SB800 mounted on top of the receiver â€” this being the only way to connect flashes as there is no sync cable port (micro-USB sync cables are availableÂ separately;Â Ed.). In testing, no matter which order I turned on the transmitter, receiver, flash or camera, the flash got the data from the camera and was ready to be used from the first shot.

After getting everything to communicate with each other, using the trigger in TTL mode is easy. Turn the Flash to TTL mode, place your Flash where you’d like it to be, take place now in the shooting position and all your TTL settings are changed from the camera to adjust what you want the flash to do, with only a fraction of a second delay for the transmission to get to the receiver.

The flash was also fired by the trigger no matter what mode the flash is in, but no control from the camera as to the power output of the flash. High-speed sync (Auto-FP Sync) works in all modes as well â€” if turned on in-camera â€” and was tested to 1/8000 shutter speed on both cameras successfully.

For range, the box states that it can handle more than 200 metres. Now, due to a medical condition, I cannot throw the Tuff Trigger nearly as far as I could and nowhere near that far, but I dropped it from the height of an extended light stand a few times. Apart from a few scuffs on the silicone outer shell, it still works fine.

If you are looking to take your flash off camera and retain all the functionality that it would have if still attached to the camera then this is certainly something to think about. With its tough design and little in the way of controls, someone clumsy like me can easily use it and not have to spend a lot of time figuring out how the trigger works, and more time on how this wireless freedom can be best implemented.

With this trigger and receiver set coming in at sub-Â£100, however, this is where HÃ¤hnel Tuff TTL trigger falls a bit flat. For around the same price point you can get other makes and model with more features and also some more receivers depending on which set you go for. If you are looking to use multiple flashes, on different groups and different power settings, then this isn’t the product for you.

The Tuff TTL Trigger for Nikon costs Â£99, with extra receivers available for Â£65 each. Visit hahnel.ie for a list of dealers.

David Monteith-Hodge is a UK-based photographer. See more of his work at photographise.com