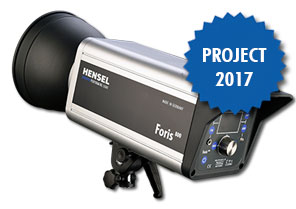 Hensel has announced the development of a new series of portable, modular TTL monolights. The Hensel Foris system, boasting HyperSync, dual power and WiFi control, is planned for release in mid-2017.

Like the Multiblitz M6, the Hensel Foris will be able to run off either a lithium battery or mains power. Hensel claims there is no compromise in either situation, with “true hybrid technology” and “dedicated energy modules” providing optimum performance in AC and DC operation.

There will “probably” be 400Ws and 800Ws variants of the Hensel Foris. Planned features include TTL flash control for “the most popular camera systems” and HyperSync for synchronisation at fast shutter speeds. Given that HyperSync is a feature of the PocketWizard FlexTT5 trigger, we might expect compatibility with Canon, Nikon and Panasonic, assuming Hensel don’t develop their own dedicated TTL trigger. WiFi remote control via a smartphone app is also planned.

The Foris system promises an unusually bright 40-watt LED modelling lamp with proportional output control. This outspecsÂ most existingÂ battery-powered monolights, which usually have a 10-watt LED. The Profoto B1 has a 20-watt modelling lamp. 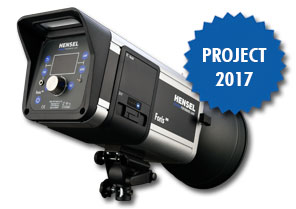 We haven’t seen the units in the flesh yet, but build quality is being vaunted already. Hensel said: “The workmanship and the design of the Hensel Foris flash units is also convincing: they are manufactured in Germany using metal to the greatest possible extent, and all components are designed for highest quality and longevity. The design by a renowned industrial designer is straightforward and has no unnecessary elements that could hinder users in doing their job.”

Pre-production samples are on display at Photokina, Hall 4.1, booth I006 this week. Visit the Hensel web site for further information.