Interfit has launched a new studio flash called the Honey Badger. It is a 320Ws monolight with manual power adjustment, a 60-watt modelling lamp and built-in radio control.

The head runs from mains power and has a standard Bowens S-type accessory bayonet. A ring around the mount also supports pop-up softboxes.

Interfit has given the Honey Badger an unusual name and a bright design to help it stand out. It is named after the “world’s most fearless creature”, supposedly because the lamp is compact yet ‘fiercely powerful’.

According to Interfit: “Our Honey Badger is a compact, 320Ws studio flash head equipped with the speed, power, and versatility that every photographer needs to attack their next shoot.” 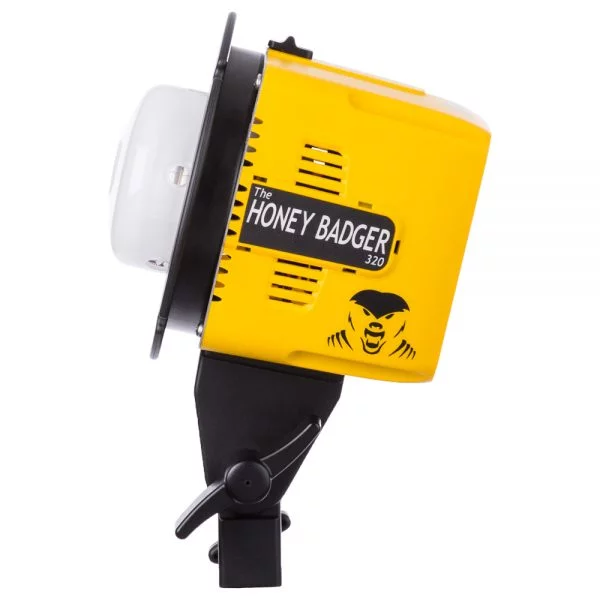 You can control the light using the same controller as for the Interfit S1 TTL studio flash, excluding TTL support. One can have up to eight groups of Honey Badgers and S1s, with 15 different channels. The remote allows adjustment of flash power and proportional modelling lamp control.

At 60W, or a claimed “equivalent light output of a 300W tungsten lamp”, the LED modelling lamp is one of the brightest we have yet seen. It is even as powerful as some standalone video lamps.

Though quirky, the Honey Badger is the spitting image of the Paul C Buff DigiBee 800, in both style and feature set. The DigiBee costs $30 more, has a 15W more powerful modelling lamp, a different accessory mount and more 1980s-style controls, but is otherwise similar in most other respects.

The Interfit Honey Badger is available now in the US for $299.99 and will be available in the UK from September. For more information, visit the Interfit Photographic web site.