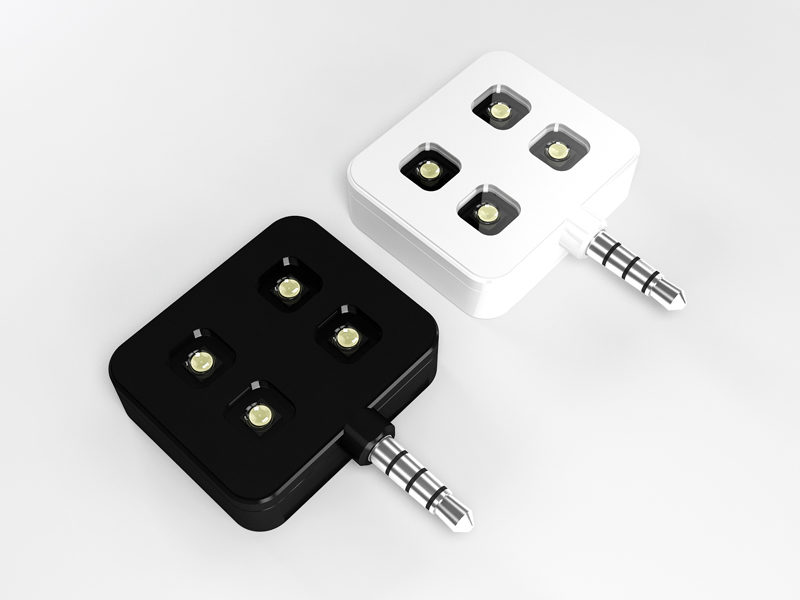 A company from Ukraine has developed a device described as “the world’s first portable flash that is fully synchronized with smartphones and tablets”.Â The iblazr, currently seeking crowd-funding on Kickstarter to the tune of US$58,000, is an LED hybrid flash and continuous lamp that plugs into the headphone jack of Android and iOS devices. 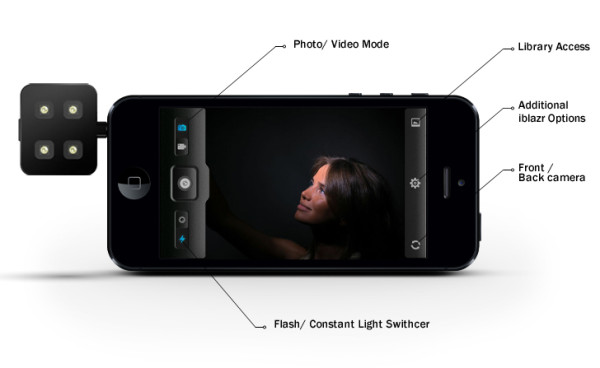 According to the Kyiv-based developers: “iblazr promises to be a unique tool for modern day photography with its remarkable capability to improve photo quality.”

The lamp connects to your handset’s 3.5mm socket, through which it communicates with iblazr’s own camera app or a third-party one. The Kickstarter page lists a selection of Android and iOS photography apps that are “excited to add iblazr synchronization in the future”. 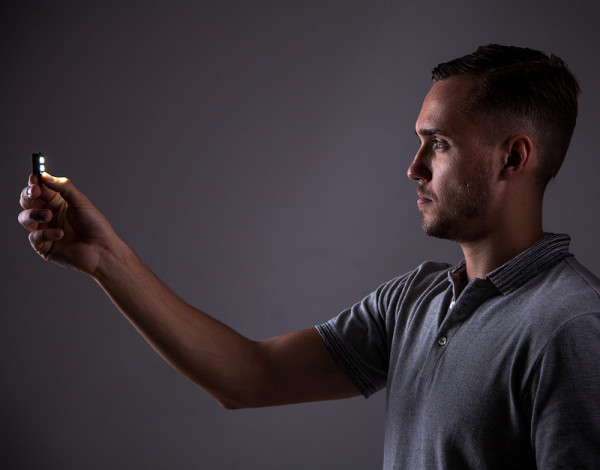 Unlike the Phojojo Pocket Spotlight â€” which also mounts in a phone’s headphone port â€” the iblazr has adjustable brightness and doesn’t have to be kept running continuously: a synchronised flash-like function will briefly illuminate the LEDs at maximum brightness while a still photograph is being taken. This works with iOS and Android, but not for Windows Phone 8. We are told they “are thinking to add WP8 synchronisation in the future”.

Update: On compatibility, iblazr says: “We’ve tested on 7 Android devices running OS 4.X and the flash synchronised pretty well. Yes we have plans for WP8 in the future, Nokia Lumia 520 is very popular now and it doesn’t has even build in LED.” 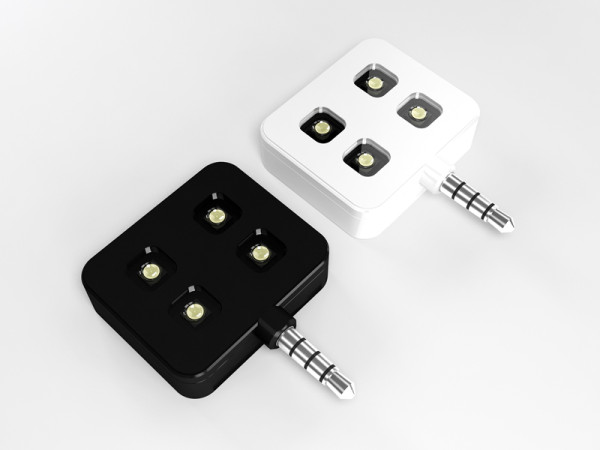 It is not a “proper” xenon flash as found in DSLRs, compact cameras, the Nokia Lumia 1020 or Samsung Galaxy S4 Zoom, and as such won’t be able to freeze action as effectively or trigger optical slave sensors*. However, using four “high-end” 5600K Cree LEDs it should be considerably brighter than your phone or tablet’s native light, and can swivel round for self-portraits and video chat.

* Update: On flash duration, iblazr says: “As for now, iPhone has 0.4 sec flash and Android has 0.2 sec. But we keep on testing, these are not the final results.”

Using standard audio cables and splitters, one can even create a multi-light, off-camera setup controlled from a mobile device. There is no wireless connectivity (like Bluetooth, for example) on board, though, so you can’t do wireless flash as we saw in a recent Apple patent. But the iblazr does have its own battery (rated for 1000 flashes) so you won’t be draining energy from your smartphone when you use it.

The company behind iblazr posted a comparison with the Manfrotto Pocket-12 â€” which can also be used with smartphones using a KLYP case â€” and suggest that the latter is larger, less bright and offers less power adjustment. 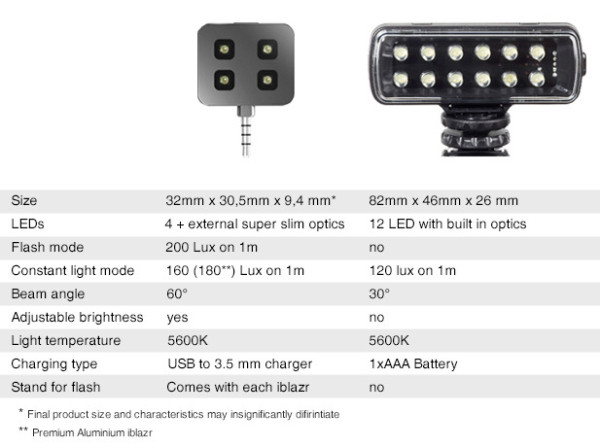 Iblazr’s founder Vlad Tislenko said of the project: “Weâ€™ve been developing iblazr for almost a year and came up with really a great product. It is really small and with that really powerful. It can be used with iOS, Android Smartphones and tablets. Itâ€™s also a great solution for DSLR macro photographers, truly multifunctional and one of a kind device.”

Kickstarter backers who pledge $39 or more will be able to get their hands on the device before it hits the market in earnest. You have the choice of white or black for the basic model, or can pay a little bit more (pledge $59) for the anodised aluminium version, which as well as having a more premium finish is better at dispersing heat, allowing it to run more brightly in continuous mode. Customers who pledge even more will be eligible for custom-engraved iblazrs as well as software development kits (SDKs) and developer packs.

“The iblazr team has set their Kickstarter funding goal at $58,000,” reads a press release. “They have done a commendable job so far with the prototypes, apps, etc. Now they need funding support to prepare for mass production by purchasing all necessary electronic components and molds. Funds will also be used for future software updates of iblazr.”

You don’t just have to use this as a photography light, though. The included USB charger is made of a self-supporting flexible material, allowing it to be positioned over a laptop to light the keyboard or on a bedside table to be used as a reading lamp.

For further information and to back the project, visit the Kickstarter page. Full details are also available on iblazr.com. At the time of writing, the campaign had raised over $20,000 and still had 40 days left to run.

Will you back this project? Are you looking for better lighting for your cameraphone? Share your thoughts below.